The issue has been "blown out of proportion," Dimitry Medvedev tells Channel 2.

By TOVAH LAZAROFF
NOVEMBER 6, 2016 06:48
Moscow warns of possible attacks by Russian jihadists on return home from Syria
Advertisement
Moscow has never denied Israel’s rights to Jerusalem, the Temple Mount or the Western Wall, Russian Prime Minister Dimitry Medvedev said in advance of his visit to the Jewish state later this week.“These rights are clear and it would be absurd to deny them,” he told Channel 2 anchorwoman Yonit Levy.He spoke warmly of Russia’s ties with Israel, despite Moscow’s votes against the Jewish state at the United Nations and its delivery of the S-300 missiles to Iran. 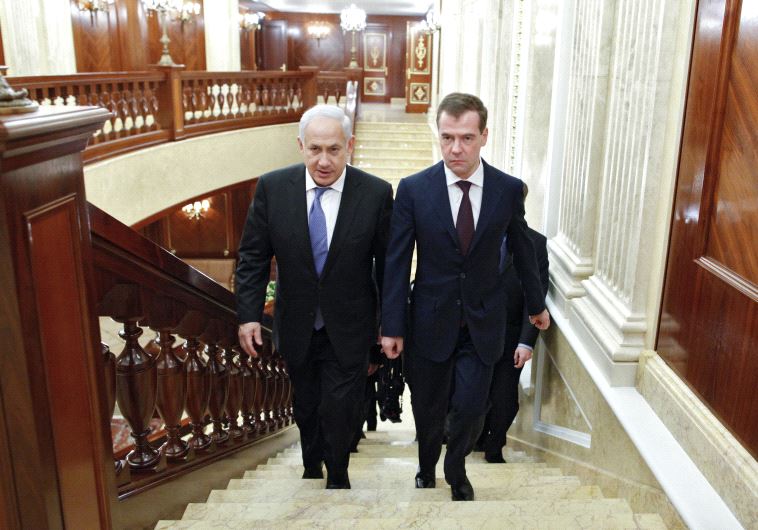 Benjamin Netanyahu Dimitry Medvedev. (Photo credit: RIA NOVOSTI / REUTERS)Levy quizzed him about those controversial issues as well as his support for Syrian President Basher Assad and charges that his country had intervened in the US elections.How does Russia explain its support of the UNESCO vote “to disregard the historic connection between the Jewish people and the Temple Mount in Jerusalem,” Levy asked Medvedev.The issue had been blown out of proportion, he responded speaking in Russian, with a Hebrew translation by Channel 2.There have been some ten votes by UNESCO Boards and Committees on such Jerusalem resolutions, Medvedev said.“There is nothing new here,” he said, as he dismissed the significance of UNESCO texts that refer to the Temple Mount solely by its Muslim name of Al Haram Al Sharif.“Our country has never denied the rights of Israel or the Jewish people to Jerusalem, the Temple Mount or the Western Wall,” Medvedev said.“Therefore there is no need to politicize this decision,” Medvedev said, adding that such resolutions, were “not directed against Israel.”Similarly, he said, there was nothing contradictory in Russia’s sale and shipment of the advanced S-300 advanced surface to air missile defense system to Iran.Israel had opposed such sales because they significantly upgrade Iran’s ability to defend its nuclear sites against any attacks. It is particularly concerned because it does not believe that the Iran deal, put in place in 2015, will limit Tehran’s capacity to develop nuclear weapons.Medvedev told Channel 2 that prior to the Iran deal, Russia respected the sanctions against Tehran and refrained from delivering the S-300. Now that the deal is in place and the sanctions were lifted, there was no reason not to complete the sale, he said.Moving over to Syria, he referred to President Bashar Assad as the country’s only legitimate leader and added that Israel's leadership preferred his rule to the prospect of a divided country under terrorist leadership.“I know him (Assad) personally. There are those who love him and those who don’t. At present Assad is the only legitimate authority operating in Syria. Any regime change would have to occur legitimately,” Medvedev said.“I remember that during my meetings with Israeli leaders, they told me they were not completely for Assad, but that there has to be someone in charge of the situation, rather than an uncontrolled break up of the country into enclaves ruled by terrorists,” Medvedev said.Middle East terrorism, he said, is threatening his country from within.“There are thousands of Russians fighting on behalf of ISIS and other Islamic Jihadist groups,” Medvedev said. “When they return they are experienced murders and terrorists. After their time fighting in Syria we don’t want them to organize something similar [within Russia],” he said.Levy asked how the presence of the Russian air force in Syria impacted Israel’s ability to prevent the flow of weapons to Hezbollah.Medvedev said that it was operating from the assumption that “all sides would not take steps to aggravate the conflict.”With regard to the United States, he charged that it had not kept its commitments in Syria and that the relationship between Washington and Moscow was at a very low point.Medvedev chuckled when Levy asked him if Russia had interfered with the US elections.He quoted Russian President Vladimir Putin, when he stated that “the United States is not a banana republic.”The US, he said, was a large and strong country and could not be influenced in that way. “It doesn’t matter who will be elected, but what policy they will execute,” he said.“Its clear [that either candidate] will act in the best national interest of the US,” Medvedev said.He called Republican candidate Donald Trump brilliant and said he had never met him. Democratic candidate Hillary Clinton, he said, was very professional and known to him from the times he met with her when she was US Secretary of State from 2009-2012.Russia expects to have a “normal" and “productive" relationship with whichever of the two candidates wins the White House, Medvedev said.With regard to the Russian initiative to hold a meeting with Israeli Prime Minister Benjamin Netanyahu and Palestinian Authority Presdient Mahmoud Abbas, Medvedev said that Moscow was not looking to replace the United States or anyone else when it comes to the peace process.On the other hand, he said, there are very discouraging signs with regard to that conflict and there have been no advancements to speak of on the Israeli-Palestinian tract over the last few years.“It’s very sad,” he said.