IDF tank used in 1982 battle in Lebanon, famous for MIAs, to be returned by Russia

News of the tank’s return comes ahead of Netanyahu’s scheduled visit to Moscow in two weeks. 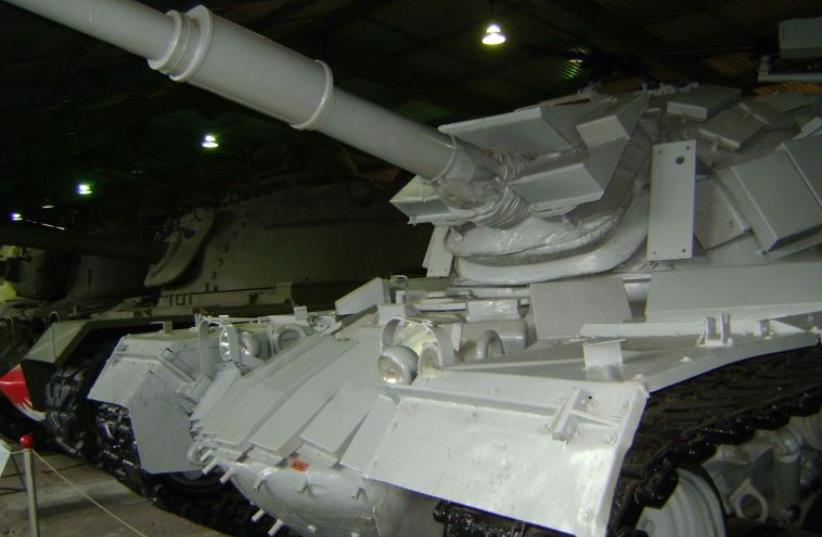 Ex-Israeli ERA-armored M48 tank. Tank was captured during the Battle of Sultan Yacoub.
(photo credit: Wikimedia Commons)
Advertisement
Amid growing ties between Jerusalem and Moscow, Israel announced on Sunday that Russia will return an IDF tank from the 1982 Sultan Battle of Yacoub in Lebanon, during which three soldiers – Zachary Baumel, Tzvi Feldman and Yehuda Katz – disappeared.“We are continuing to seek information about their fate, through all means possible,” Prime Minister Benjamin Netanyahu said on Sunday, adding that Israel “will not rest until this matter is resolved.”Netanyahu thanked Russian President Vladimir Putin for responding to his request to give Israel the tank, which was transferred from Syria to Russia.“For 34 years the families of the missing [soldiers] who disappeared without a trace, have had no burial plot to go to,” Netanyahu said. “This tank is the only testament we have from that battle,” he said.News of the tank’s return comes ahead of Netanyahu’s scheduled visit to Moscow in two weeks and as ties between Israel and Russia are growing.It will be the prime minister’s second trip to Russia in less than three months. Following his visit in April, Netanyahu said that he had spoken with Putin about increasing and improving security coordination regarding the ongoing Syrian civil war and Russian operations there.An IDF delegation is already in Moscow to discuss the transfer of the tank, which has been in Moscow’s armory museum.Eight Israeli tanks were lost and more than 20 soldiers killed in the June 10-11 Battle of Sultan Yacoub with Syrian forces in Lebanon’s Bekaa Valley.Baumel, Feldman and Katz were photographed alive in Damascus on the day of their capture. They were also seen by several eyewitnesses including a Time magazine reporter. Baumel was born in New York and held dual Israeli-US citizenship.His father, Yona, believed that his son, along with the two other missing soldiers, was held in Syria. Until his death in 2009, Yona worked tirelessly to learn more of his son’s fate.Deputy Defense Minister Rabbi Eli Ben-Dahan said news of the tank’s return take him back 34 years to the time when, as an officer in an artillery unit, he was sent to the outskirts of the Sultan Yacoub battlefield.His unit’s task was to provide cover for a tank platoon that had been ambushed on its way to attempt cutting the Damascus-Beirut highway.“It was night time. The soldiers were in grave danger. They were being shot at from all sides,” recalled Dahan.Syrian forces were on a ridge, shooting into a valley where the tanks were trapped. His unit shot back at the Syrians, while leaving a path open for the soldiers to retreat, Ben-Dahan recalled.Rabbi David Turgeman, who heads a hesder yeshiva in Dimona, said that he had been among those ambushed in the battle that ended with the three missing soldiers.He described the chaos that occurred during the enemy attack, which caused many of the soldiers to abandon their tanks, including the three missing soldiers, who were positioned in separate tanks. Turgeman’s tank was hit and burst into flames. For all he knew, Turgeman said, the vehicle that is being returned to Israel could be his tank. He was with a number of soldiers, including Yehuda Katz’s tank’s driver, who were able to hide in the field until the cease-fire was announced.At that point, he said, he took off his white fringed garment (tzitzit), tied them to his rifle and held it up in the air, so that when they walked toward the Israeli forces, the soldiers should know that they were Israelis and not Syrians.The absence of closure with respect to the three soldiers remains “an open wound,” he said.Baumel’s sister Osna Haberman, who works as a high school teacher, said she had been in a staff meeting on Sunday, when she received a phone call from the Prime Minister’s Office.The report of the tank’s return, however, did not make her expect news of her brother’s fate anytime soon. “It is a little bit early to start rejoicing,” said Haberman. Nor was she clear what information the tank could provide about the whereabouts of the missing soldiers.“The army does not assume that they were in the tank,” said Haberman. They were in the field when they disappeared, she said. “The tank is not the last point of reference,” Haberman explained. “This does not give me any surge of hope at all.”“We are waiting for facts. We are waiting for an eyewitness [account], scientific evidence or DNA, that would give us a real point of reference,” she added. “As time passes, the possibility that he is alive becomes smaller,” she said.“The assumption is that if they had them in captivity they would have used them as a trading card,” Haberman said. She added that people had a history of disappearing in Syria.Her mother has continued to seek her brother’s whereabouts ever since he disappeared, and the family is briefed twice a year by the government and the army with regard to ongoing efforts to retrieve the three missing soldiers. “We are not giving up until we have something factual,” she said.“We continue saying to the government: You sent the boys out and you have to bring every family closure and we are not willing to accept anything less,” she said.