Salomon brit: ‘We want to be remembered as a happy family’

Baby named Ari for three murdered relatives who fought like a lion. 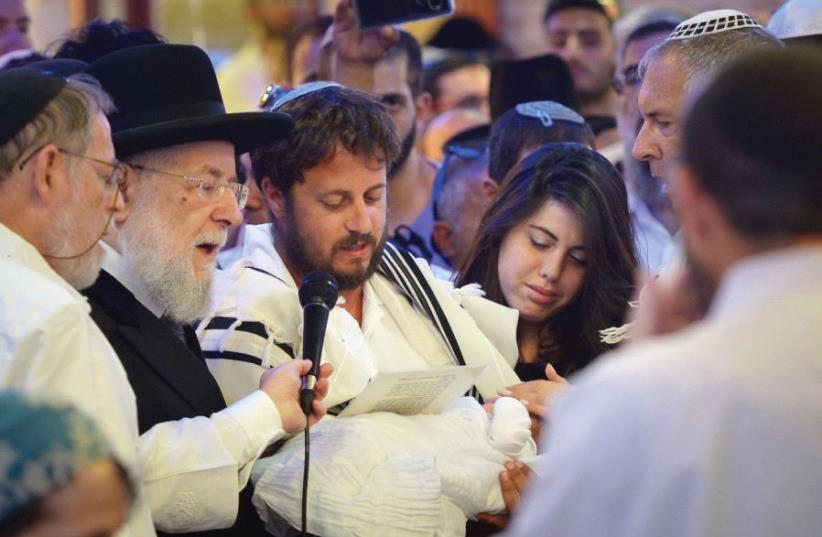 EIGHT-DAY-OLD Ari Yosef Salomon is held by his father, Shmuel, as the infant’s mother, Chen, looks on and Rabbi Israel Meir Lau (second left) officiates at the brit in El’ad, July 27, 2017.
(photo credit: FLASH90)
Advertisement
The baby’s small cries briefly filled the crowded room. Guests stood shoulder-to-shoulder to celebrate the circumcision of the boy whose entry into the world was followed by the murder of three members of his family.“I never imagined that I would celebrate the birth of my oldest son, who I had so longed for, with half the nation,” said Shmuel Salomon on Thursday afternoon in small event hall in the city of El’ad.Salomon held his son as he read from a written text, with his wife, Chen, by his side. A prayer shawl was wrapped over his mourning clothes.Just one week earlier, he and Chen had rejoiced over their son’s birth. It was a private happiness that quickly turned into a national tragedy.One day after the birth, on Friday night, Shmuel’s parents, Yosef and Tovah, invited members of the Halamish settlement community where they lived to come over for a small house party.One of the first of the guests to arrive was a Palestinian terrorist – disguised as a Sabbath-observant Jew – who then stabbed to death Yosef and two of his adult children, Chaya and Elad.Six days later, on Thursday, the family invited the Israeli public to join them for the circumcision of the boy they have named Ari Yosef Salomon.“Our son made the choice of life for us. He was given to us as a present the day before our lives were destroyed. We chose this public stand so that we would be remembered as a happy and united family and not a bereaved one with a torn heart,” said Salomon.Still, he said, it is as hard to hold both the sorrow and joy at the same day, in the same time.“Instead of completely rejoicing, my happiness is filled with tears,” Salomon said as he looked out at the room where the family has sat shiva.“We are still clothed in mourner’s outfits. We have chosen life, especially in these terrible days we are choosing happiness and hope over sadness and despair. We have chosen unity over divisiveness.”Shmuel explained that he and Chen had picked the name Ari before the birth in memory of his maternal grandfather, Avraham Aryeh.But it took on a totally different meaning after the murders of three members of their family.On that Friday night, “my father, Chaya and Elad fought like lions to save their family.”“Yosef is for the father that I loved and admired, who taught me how to be modest and treat people well,” Shmuel said. His father, he added, “was beloved by everyone and he strengthened them in return.“This same is true for this Ari Yosef Salomon, who came into this world to give us strength,” he said.Tel Aviv Chief Rabbi Israel Meir Lau, the former Ashkenazi chief rabbi of Israel, conducted the circumcision ceremony. “There is a heavy shadow over this special event,” he said, adding the religious phrase said at every brit best described it, “Through your blood we will live.”Hundreds more guests gathered outside the building and listened to the event on a loudspeaker.Folding tables were set up for them with drinks, light pastries and fruit.One of the guests, Revital Atari, said she knew Elad Salomon’s family, who lived in the city. Her daughter was friends with his daughter.“We have felt their pain and wanted to support them as much as possible,” Atari said.