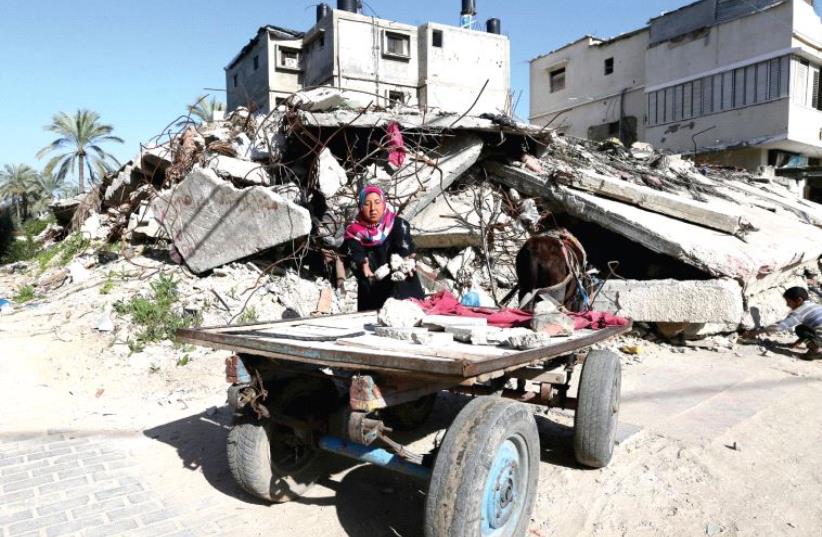 A Palestinian woman collects bricks from a house destroyed during the 2014 Gaza war
(photo credit: REUTERS)
Advertisement
Israel could have avoided the 2014 Gaza war, which left 74 Israelis and more than 2,000 Gazans dead, security cabinet ministers told The Jerusalem Post on Monday, the day before State Comptroller Joseph Shapira’s damning report on Operation Protective Edge is set to be released.
Operation Protective Edge
The ministers said the kidnapping and murder of three Israeli teenagers, followed by dozens of rocket attacks, compelled the security cabinet to embark on the operation, but that in retrospect, the war was not wanted by Israel and did not accomplish enough to justify it taking place.“Israel was dragged into Protective Edge and it wasn’t our choice,” one minister said.“Protective Edge did not have to take place. Different things could have been done that could have given us time to plan and have proper deliberations.”Security cabinet ministers blamed faulty intelligence on Hamas’s intentions and ego wars among intelligence agencies for what turned out to be Israel’s longest war since the War of Independence in 1948.They said Israel could have avoided angering Hamas by transferring tax money that was needed to pay salaries in the Gaza Strip.Other security cabinet ministers said Israel had no choice but to respond to Hamas’s aggression and that it was important to use the operation to take action against the threat of terrorist tunnels built by Hamas. But they said that without operational plans, the tunnels were handled “on the fly” as the operation went on.The ministers said there were also missed opportunities for diplomatic achievements, while Israel’s image was harmed by the emergence of pictures of destruction from Gaza that were inevitable in asymmetric warfare.“The problem in Gaza is not just tunnels,” former security cabinet minister Tzipi Livni said. “It’s much wider. The real problem is that the Israeli government has not set a strategy for the Palestinians in general and Gaza in particular. The UN was ready to vote on rehabilitation for demilitarization of Gaza, and Netanyahu missed the opportunity.”Netanyahu defended himself from the report, telling his Likud faction on Monday that his security cabinet was briefed sufficiently ahead of Operation Protective Edge.The report is expected to criticize Netanyahu’s handling of the security cabinet ahead of and during the operation, especially regarding the issue of the tunnels.“No security cabinet in the history of the state has been updated more,” Netanyahu said. “When entering the security cabinet, one is supposed to leave his cellular phone and his narrow, personal political interests outside.”Netanyahu accused Shapira of being too harsh on the IDF and intelligence agencies in the report.“Unlike the Comptroller’s Report, I support the heads of the IDF, Shin Bet [Israel Security Agency] and defense establishment, who protected and continue to protect the citizens of Israel. Out soldiers and officers fought with all their souls and the people of Israel are proud of them.”Netanyahu boasted that in the operation “we gave Hamas the harshest blow it has endured in its history.” He said the operation’s key lessons were not in the report and were being implemented quietly and consistently.Zionist Union leader Isaac Herzog said the state comptroller would criticize the prime minister in the report for poor strategic handling of the country and decision-making during the operation. He said Yesh Atid leader Yair Lapid also could not avoid blame, because he was a member of the security cabinet during the operation and did not have enough of an influence.Lapid said he would not call upon Netanyahu to quit due to the mistakes he made during and since the operation, but he expected him to take action to correct them.“The IDF did the right thing in starting to fix its mistakes the day after the war, but the prime minister has done the opposite,” Lapid said. “Mistakes happen. What bothers me is that there are political spins. This is not how a country is run. If a single soldier can be saved in the next war, the government has an obligation to take action. The prime minister must go before the public, say he made mistakes and start fixing them.”Defense Minister Avigdor Liberman said the discourse about the report was only political and harms Israeli security. He complained that politicians have been too busy settling scores.“The IDF and security establishment have been busy learning lessons and fixing what needs to be fixed since the day after the operation,” Liberman said. “We have a strong army and it is as ready as it has been in decades.”