Sen. Graham says to Netanyahu: Tell the White House to "go f*** themselves." 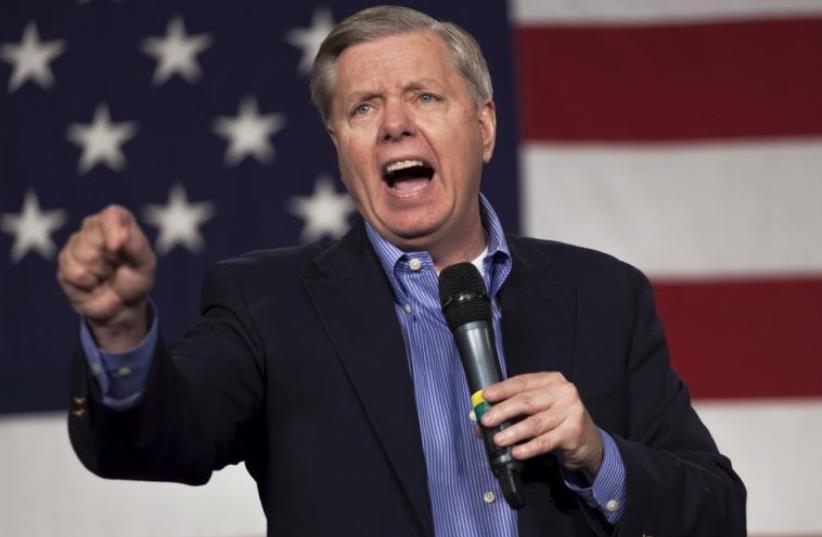 US Sen. Lindsey Graham (R-SC)
(photo credit: REUTERS)
Advertisement
WASHINGTON – US Sen. Lindsey Graham is holding up the conclusion of a critical, decade-long defense deal between the US and Israel with legislation that would increase US aid to the Jewish state next year by over $300 million more than what the White House has agreed to.Graham’s effort is a finger in the eye to the Obama administration, which has spent over a year negotiating a complex Memorandum of Understanding with Israel that will ultimately increase US defense aid to the state from $3.1 billion to $3.3b. a year beginning in 2018.Congress has played no role in the effort, and Graham, a Republican from South Carolina, sees no reason why the legislature should simply abide by what the administration has negotiated without its consent.“I’m offended that the administration would try to take over the appropriations process,” he told The Washington Post over the weekend.“We can’t have the executive branch dictating what the legislative branch will do for a decade based on an agreement we are not a party to.”Graham, who chairs the Senate subcommittee on the foreign affairs budget, said he has received no direct complaints from the White House, but he did recently receive a call from Prime Minister Benjamin Netanyahu, who said he is prepared to sign the agreement.“The Israeli prime minister told me the administration is refusing to sign the MoU until I agree to change my appropriation markup back to $3.1 billion,” Graham said. “I said, ‘Tell the administration to go F themselves.’” Graham challenged Netanyahu to say that Israel does not need the additional money appropriated in his markup bill. Netanyahu allegedly declined to do so.Officials familiar with Graham’s markup tell The Jerusalem Post that the American Public Affairs Committee – typically with its hands in all Israel-related legislation – has taken no part in this effort.Asked for comment on Graham’s stand, one White House official told the Post the administration is “prepared to sign” the agreement on its own terms.The negotiated MoU, the official said, “would include both foreign military financing funds and an unprecedented multi-year commitment of missile defense funding, and would constitute the largest single pledge of military assistance to any country in US history.”“We also remain committed to upholding the funding levels agreed by the United States and Israel in the current MoU, including $3.1 b. in foreign military financing funds in Fiscal Year 2017,” the official added.Graham’s proposal would increase that $3.1b. to $3.4b.It was not immediately clear if Graham had recruited allies to his cause, but one unlikely dissenter may be House Speaker Paul Ryan.Speaking with the Post in April, Ryan said of the MoU talks: “I don’t know what the numbers are going to be – that’s between the administration and the Israeli government.”“We have budget constraints like anybody else does,” he added.US Ambassador to Israel Dan Shapiro spoke on Sunday night about the MoU.“The next decade of American military support for Israel is spelled out in a Memorandum of Understanding our countries have been discussing in recent months,” he said at a counter-terrorism conference at the IDC Herzliya. He quoted National Security Adviser Susan Rice’s remarks in June that the deal will be “the single largest military assistance package – with any country – in American history.”“In keeping with America’s commitment to preserve Israel’s qualitative military advantage, by the end of this year the Israeli Air Force will take delivery of the first F-35 Joint Strike Fighter,” Shapiro said. “This is the latest manifestation in a long history of Americans helping Israel defend itself with cutting-edge airborne platforms.”Jerusalem Post staff contributed to this report.