After spending eight years in a coma following a stroke, Sharon passed away at the age of 85. 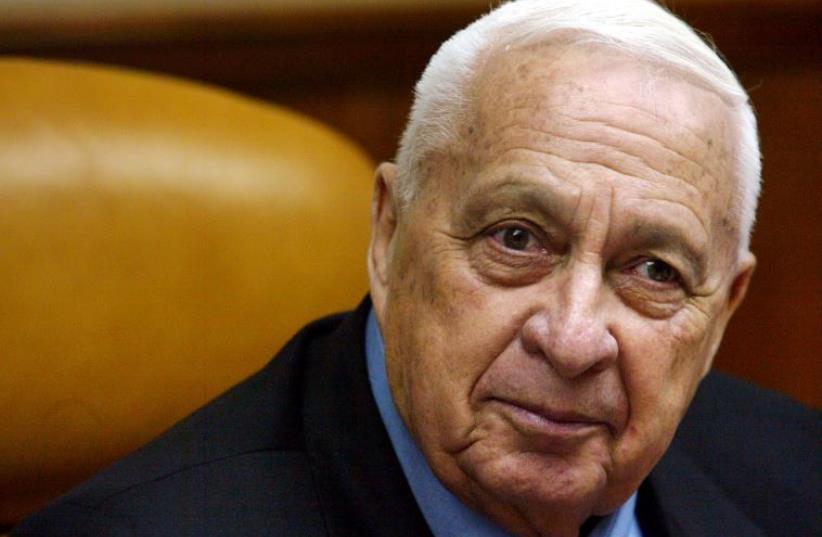 Then-premier Ariel Sharon attends a cabinet meeting in 2005
(photo credit: REUTERS)
Advertisement
Lawmakers and ministers from the right-wing Likud party – with the exception of two MKs – snubbed the official state remembrance ceremony for one of the party's founders and icons, the late former prime minister Ariel Sharon, at his family ranch in southern Israel on Friday.Sharon, the burly former general who rose to the top of the political ladder following a controversial career in both the military and civilian life, was recognized on the second anniversary of his death.After spending eight years in a coma following a stroke, Sharon passed away at the age of 85.Although he rose through the political ranks through the Likud primarily as the patron of the settler movement, the religious Zionist movement was stung by Sharon's decision to uproot 8,000 Jewish settlers from the Gaza Strip as part of the "disengagement plan."Liberals and left-wing figures revile Sharon for his decision – as defense minister in the Likud-led government of Menachem Begin – to invade Lebanon, which resulted in an 18-year period in which Israel was mired in a costly occupation of a security belt in the southern part of the country.Sharon was also deemed indirectly responsible by a state commission of inquiry for a massacre of Palestinian refugees in Beirut-area camps by Christian militiamen allied with Israel.Sharon's disengagement plan, however, remains his signature policy for which he is most remembered – for better or for worse, depending upon which side of the political spectrum one finds themselves."I've known the Sharon family for years," said MK Yoav Kisch, one of two Likud parliamentarians who made the trek to the Sycamore Ranch in the western Negev. "I joined the Likud because of Arik (Sharon's nickname). My mother was best friends with his late wife, Lily, of blessed memory.""As a boy growing up in Tel Aviv, we lived just down the block [from the Sharon family]. I think that the disengagement was a mistake, but Sharon deserves credit for a lot of things. I'm not boycotting him like others are."It's worth noting that Prime Minister Benjamin Netanyahu , who was a cabinet minister at the time the disengagement plan was voted on, supported the move, but then resigned from the government just before its implementation.Netanyahu says that unilateral withdrawals encourage Palestinian terrorism and rocket fire on Israeli civilians and towns.