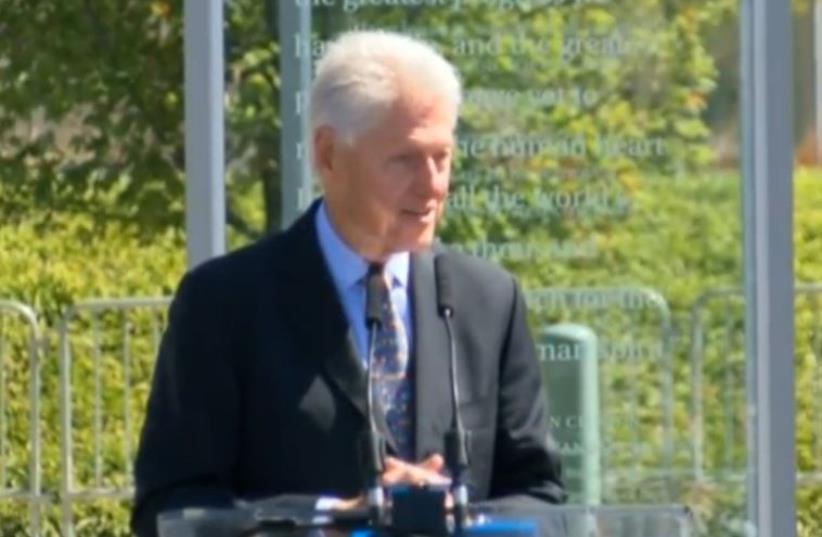 Former US president Bill Clinton pays tribute to Anne Frank at the opening of a new installation at his presidential library in Little Rock, Arkansas, October 2, 2015
(photo credit: screenshot)
Advertisement
WASHINGTON – Two of former president Bill Clinton’s scheduled Israel-related events were vetoed by the Obama administration while his wife, Hillary Clinton, was secretary of state, Politico reported on Tuesday.The two events – a meeting in New York between the 42nd US president and Prime Minister Benjamin Netanyahu, as well as a speech commemorating the 10th anniversary of the Camp David peace talks – were scheduled for 2010. The events were a potential cause of “heartburn” for administration officials, who were in the midst of a push for direct talks between Netanyahu and Palestinian Authority President Mahmoud Abbas.Emails obtained by Politico show senior aides to Hillary Clinton, as well as White House officials, questioning the wisdom of the two events. At the time, the State Department would not confirm US government interference in Bill Clinton’s event schedule.The former president is scheduled to speak at a Yitzhak Rabin memorial rally at Tel Aviv’s Rabin Square on Saturday night.