Shaked on Ya’alon’s Beit El bluff: ‘Deception will be answered in kind’

Defense minister told justice minister that the buildings would not be razed yet – but failed to mention that Border Police would be evacuating them. 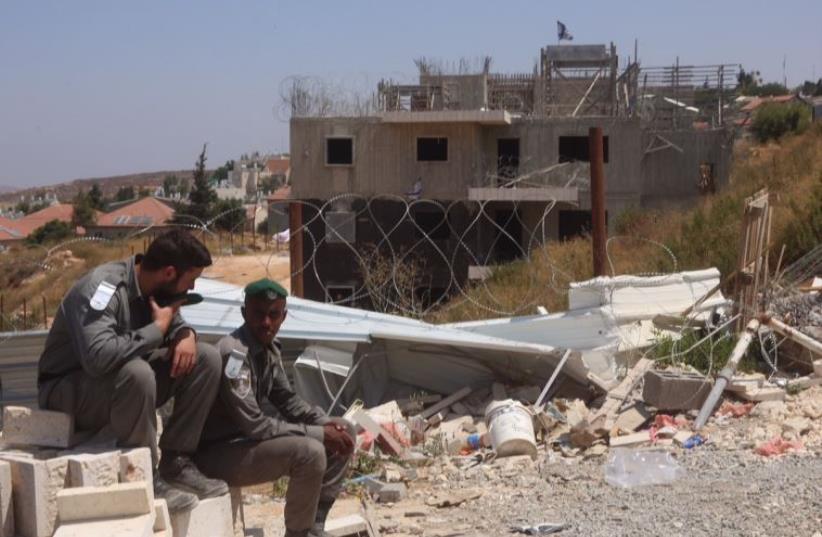 Beit El
(photo credit: MARC ISRAEL SELLEM/THE JERUSALEM POST)
Advertisement
Defense Minister Moshe Ya’alon broke agreements and bluffed in his evacuation of the Dreinof buildings in Beit El, Justice Minister Ayelet Shaked said Tuesday, and his actions will have consequences.Ya’alon told Shaked on Monday evening that the buildings, which the High Court had ruled must be razed by Thursday, would not be demolished until the legal process was exhausted – meaning, until the removal of an injunction that NGO Yesh Din, along with Palestinians who claim to own the land on which the buildings are being constructed, had requested to prevent the project’s finalapproval.After speaking to Ya’alon, Shaked wrote to Beit El Mayor Shai Alon that he “can go to sleep quietly tonight,” according to messages that Channel 10 News reporter Roy Sharon revealed.
Border Police, settlers clash in Beit El
After Border Police evicted 50 people from the building overnight Monday, Shaked pointed out that Ya’alon had told them to do so on the 10th anniversary of the eviction of Israeli residents from Gaza.“This happened despite what I was promised and what I said, in my name, to the residents [of Beit El],” Shaked stated.The justice minister warned that “unilateralism, deception and breaking agreements will be answered in kind, and the state will give one resolute response to the High Court: Prevent the destruction.”Ya’alon clarified his stance, saying that “I am against the demolition, and I am acting to prevent it and strengthen settlements in Beit El specifically and Judea and Samaria in general.”The defense minister said that in recent weeks he had taken action to provide a legal basis for the buildings’ existence and thereby prevent their demolition – a reference to his efforts to have the Civil Administration of Judea and Samaria issue all authorizations necessary for the project – and that he was waiting for the High Court’s response.“Yesterday, I clarified to the Bayit Yehudi ministers with whom I spoke that there will not be any demolition before the discussion in the High Court. In any case, we will act only according to the law and the High Court’s decision,” Ya’alon added.Meanwhile, Bayit Yehudi chairman Naftali Bennett held a press conference in Beit El, where he accused Ya’alon of “a reckless, extreme and provocative act that violates the foundations of the government and its values, and violates responsible and statesmanlike behavior that I expect from this government.” 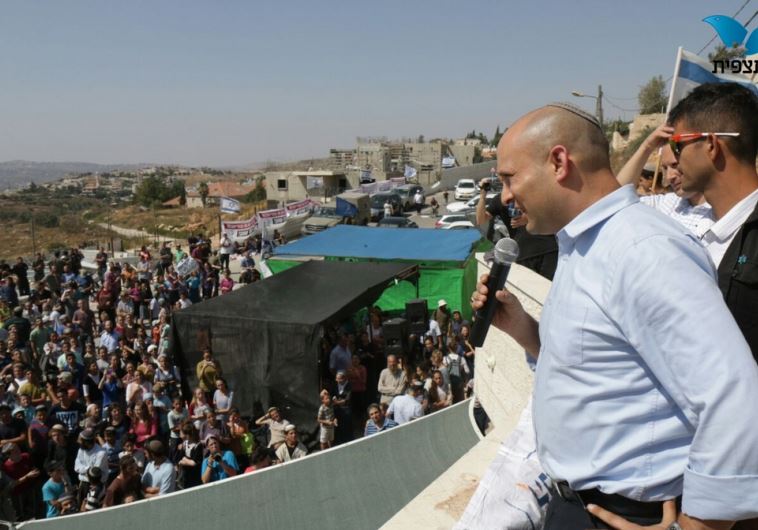 (Photo: Tazpit)“I don’t understand how [Ya’alon] could break his promise,” Agriculture Minister Uri Ariel said in an interview with Israel Radio. “To brutally and violently enter is a serious mistake and is unforgivable.”“But this isn’t something over which you’d take apart the coalition,” the interviewer wondered.“I wouldn’t sign off on your assessment,” Ariel responded.When the interviewer asked if that was a threat to the coalition, Ariel said, “We don’t threaten, but it seems to me that you are not being accurate in your evaluation, so I corrected you.”MK Bezalel Smotrich – who, like Ariel, is in the hard-line Tekuma party within the Bayit Yehudi faction – called Ya’alon’s actions “manipulative and nasty” and “typical deceptive conduct,” since the defense minister had promised not to demolish the buildings but had not promised not to evacuate them.Smotrich threatened to vote against the coalition later this week, but wrote on Twitter that the government would not fall because of the incident.Even his minor threat is unlikely to come to fruition, though, because two of the major bills going to a vote in the Knesset on Wednesday are backed by the Right – the “Norwegian Law,” which would allow ministers to resign from the Knesset and bring former Bayit Yehudi MK Shuli Moalem-Refaeli back to the legislature, and a bill to force-feed prisoners on hunger strike.Yisrael Beytenu chairman Avigdor Liberman wrote on Facebook that he had avoided joining this government because Netanyahu would not commit to allowing construction in the West Bank and Jerusalem. He called on Bayit Yehudi to leave the coalition.Meanwhile, in the Likud, several ministers and MKs spoke out against the evacuation and possible demolition in Beit El.MK Oren Hazan essentially said that he would barricade himself inside the Dreinof buildings – in which he has rented an extra-parliamentary office – expressing hope that the move would stop their demolition.
(Photo: Marc Israel Sellem)
“When I established my office, I knew that I was doing it to serve the residents of Judea and Samaria, including those of Beit El, and to strengthen settlements, break the [construction] freeze and prevent buildings from being demolished. According to law, it is completely forbidden [for security forces] to snoop and evacuate or even enter an MK’s office, unless an appropriate court order is presented,” Hazan stated.Immigration and Absorption Minister Ze’ev Elkin criticized the nighttime evacuation and called for Ya’alon to invest his efforts in completing the process of authorizing the buildings and a new residential neighborhood, as opposed to evacuating them.“There is nothing more absurd than to demolish buildings that will be allowed to be rebuilt a minute later. In the days that we are painfully marking the tragic expulsion from Gush Katif [Gaza] and northern Samaria, the time has come to build and not destroy,” Elkin added.Minister without Portfolio Ophir Akunis called to adopt the government-sponsored Levy Report, named for former Supreme Court justice Edmund Levy, who wrote it after his retirement in 2012. The report stated that West Bank settlements were legal under international law, and it called for the government to make outposts built on state land legal.“The Likud is for settlements and obeying the law,” Akunis declared. “In order to prevent similar situations in the future and ensure the future of all settlements, we must adopt the Levy Report... which will ensure normal lives for residents of Judea and Samaria and allow the current government and the ones after it to develop and strengthen all settlements.”In the opposition, MK Tzipi Livni (Zionist Union) expressed concern that ministers were advocating breaking the law.“It needs to be clear that a policy won’t be forced on us through breaking the law. Judea and Samaria are not the Wild West,” she wrote on Facebook. “The biggest problem is that our prime minister is not a leader who backs security forces and law enforcement, but someone who pays lip service to the coalition.”MK Esawi Frej (Meretz) said that “only in Israel do the justice minister and education minister attack the defense minister for very belatedly taking a step to stop illegal construction on private [Palestinian] land. Only in Israel is demolishing buildings not connected to their legality, but to who builds them. Settlements are welcome to break the law, and bulldozers are ordered for Arabs.”