Steinitz: US report on Iran terrorism should end delusions about nuclear program

Steinitz was reacting to the annual report issued by Washington which determined that terrorist attacks worldwide surged by more than a third and fatalities soared by 81 percent in 2014. 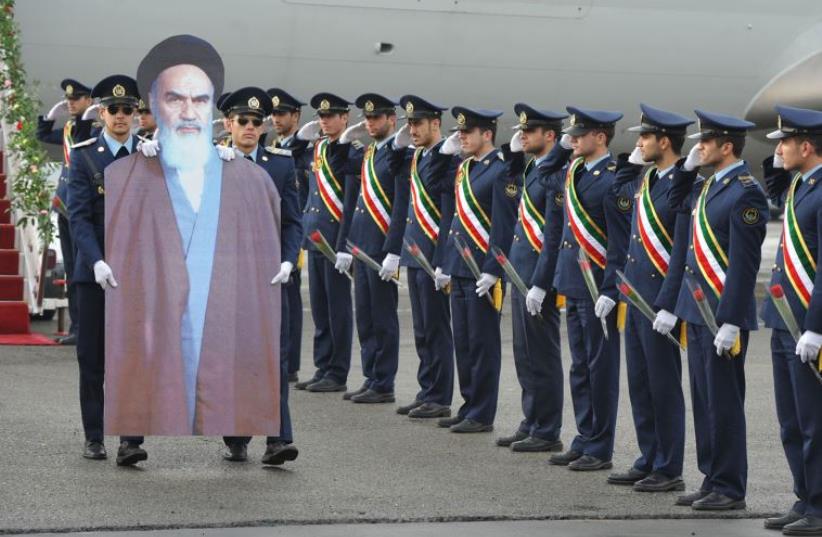 Members of the Iranian air force re-enact the scene of founder of the Islamic Republic Ayatollah Ruhollah Khomeini's arrival to Iran in 1979 at Merhrabad airport
(photo credit: REUTERS)
Advertisement
The US State Department report detailing Iran’s continued sponsorship of international terrorism proves that Tehran cannot be trusted to curb its nuclear program, National Infrastructure, Energy and Water Minister Yuval Steinitz said on Saturday.Steinitz was reacting to the annual report just issued by Washington, which determined that terrorist attacks worldwide spiked by more than a third and fatalities soared by 81 percent in 2014.Last year saw Islamic State eclipse al-Qaida as the leading jihadist terrorist group, the State Department said on Friday.Steinitz, however, is more concerned with the report’s findings on Iran. The minister said the report’s conclusions “dealt a death knell” to “the American delusion, according to which an easing of sanctions as part of an interim nuclear treaty would lead to a moderation of its position.”“That’s why the report should serve as a warning sign for anyone who thinks Iran will moderate its behavior after a final-status nuclear treaty,” he said.The State Department report faults Tehran for continuing to fund its proxy organizations throughout the Middle East – namely Hezbollah and Hamas – during 2014, even while it was engaged in talks with the West. Iran also expanded its foreign operations in Africa, Asia and South America, the report finds.Despite facing costly obstacles from the Syrian civil war, Iran continued arming and funding terrorist proxies that target Israel throughout 2014 largely unabated, the report noted.The annual accounting of organized terrorism worldwide asserts that Iran has continued, if not expanded, its operations beyond its historical focus on Hamas in the Gaza Strip and Hezbollah in Lebanon, to a limited number of operations in Africa, Asia and Latin America, as well as to “various groups throughout the Middle East.”“Iran has historically provided weapons, training, and funding to Hamas and other Palestinian terrorist groups, including Palestine Islamic Jihad (PIJ) and the Popular Front for the Liberation of Palestine-General Command (PFLP-GC),” the report reads.“These Palestinian terrorist groups have been behind a number of deaths from attacks originating in Gaza and the West Bank.”Much of Iran’s efforts throughout 2014 focused on maintaining its “resistance front” in Syria and Iraq, the report says, through its support for Shia governments and militias. The report notes of Islamic Revolutionary Guard Corps-Qods Force presence on the ground in both countries.The report makes note of an Israeli naval raid in March 2014 on a cargo ship traversing the Red Sea, the Klos C, off the coast of Sudan. The ship’s cargo included 40 M-302 rockets, 180 mortars, and approximately 400,000 rounds of ammunition hidden within crates of cement labeled “Made in Iran.”“Although Hamas’s ties to Tehran have been strained due to the Syrian civil war, in a November 25 speech, Supreme Leader Ali Khamenei highlighted Iran’s military support to ‘Palestinian brothers’ in Gaza and called for the West Bank to be similarly armed,” the report continues.“In December, Hamas deputy leader Moussa Abu Marzouk announced bilateral relations with Iran and Hamas were ‘back on track.’” In the north, Iran continues providing Hezbollah – active in the fight in Syria as well as against the Jewish state from Lebanon – with “hundreds of millions of dollars,” the report states, noting that Tehran is training “thousands of its fighters at camps in Iran.”“Gen. Amir Ali Hajizadeh, head of the IRGC Aerospace Force, stated in November that ‘the IRGC and Hezbollah are a single apparatus jointed together,’ and Lebanese Hezbollah deputy secretary Gen.Naim Qassem boasted that Iran had provided his organization with missiles that have ‘pinpoint accuracy’ in separate November public remarks,” it states.The State Department asserts that, in admitting its arming of Hezbollah, Iran is in open violation of UN Security Council Resolutions 1701 and 1747.The report praises Israel’s response to terrorist threats throughout 2014, which saw war with Hamas in Gaza lasting more than 50 days that summer.“Israel was hit by a record volume of rocket and mortar fire from Gaza and the Sinai in 2014, according to the Israeli government, with more than 4,660 projectiles launched, most during the July-August conflict, at Israeli territory compared to 74 launchings in 2013 and 2,557 in 2012,” it says, referring to Israel as a “committed counterterrorism partner.”“Militants from Gaza also infiltrated Israeli territory using tunnels in six separate attacks and, for the first time, by a sea-borne operation,” it continues. The report praises Egypt for taking aggressive counterterrorism measures against Hamas and its tunnel operations in Sinai.It notes, briefly, that Iranian proliferation of nuclear weapons remains a concern.In that regard, French Foreign Minister Laurent Fabius is due to meet his Iranian counterpart, Mohammad Javad Zarif, on Monday to discuss the final round of talks over Iran’s nuclear program, beginning later in the week, a senior French diplomatic source said on Saturday.The bilateral meeting, on the sidelines of an EU foreign ministers summit in Luxembourg, will be followed by a meeting between Zarif and all the European parties negotiating with Iran.“We will see if we have moved forward or gone backwards,” said the diplomat. “There is still a lot of work to do to get the robust deal that we are hoping for.”He said major powers, which also include the United States, Russia and China, are not thinking about a long-term extension to the talks and are focused on reaching a deal around the June 30 deadline.Iran and the group of six – the United States, Russia, China, France, Britain, and Germany – reached a framework nuclear deal on April 2 in Lausanne. They aim for a final agreement by June 30 under which Iran would restrain its nuclear program in exchange for relief from economic sanctions.France has been sticking to a tougher line than the US in the negotiations.Michael Wilner and Reuters contributed to this report.