The ruling came as the state made a surprise announcement at the hearing that it would not oppose postponing Olmert's sentence pending the appeal. 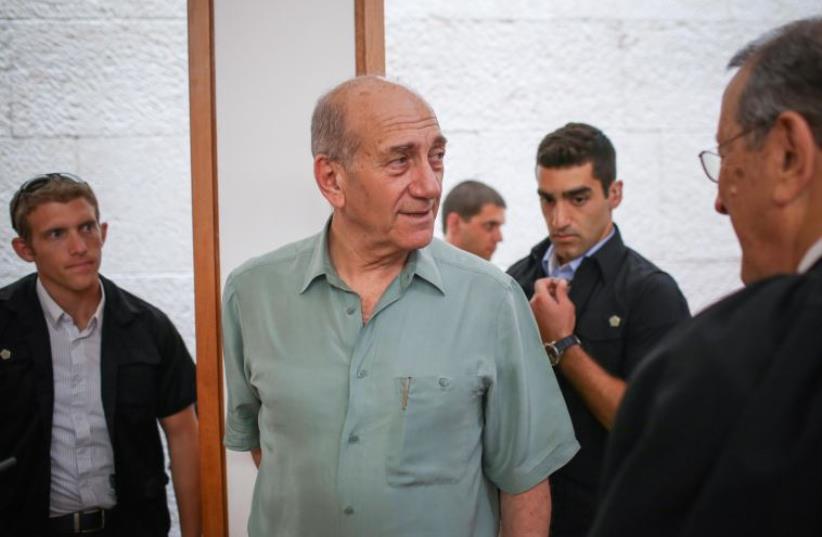 Ehud Olmert
(photo credit: NOAM MOSKOVICH)
Advertisement
Supreme Court Justice Yitzhak Amit on Wednesday ruled that former prime minister Ehud Olmert will not have to start his eight month jail sentence from his conviction for corruption in the Talansky retrial pending his appeal.The ruling came as the state made a surprise announcement at the hearing that it would not oppose postponing Olmert's sentence pending the appeal.Amit rebuked the state for not agreeing in advance of the hearing leading to an unnecessary waste of the Supreme Court's and other's time.Last week, Olmert appealed his conviction and sentence to the Supreme Court.The Jerusalem District Court convicted Olmert in March of illegally receiving, using and concealing at least $153,950 (out of an alleged $600,000) funds in envelopes from New York businessman Morris Talansky from 1993 and 2002, with the case itself dating back to 2008.If he goes to jail, Olmert will be the first prime minister in the country’s history to be locked behind bars.
The jail sentence was his second, piling on to the massive defeat he received with a six-year sentence in the Holyland real estate trial on an even more serious conviction for bribery, pushing his total potential jail time up to six years and eight months. That conviction also has been appealed to the Supreme Court.The appeal, filed by lead lawyer Eyal Rozovsky, focused on a variety of grounds including claiming that two of the three judges who convicted and sentenced Olmert, Moshe Sobel and Rivka Friedman-Feldman, had gone beyond their authority by taking into account factors beyond the narrow instructions the Supreme Court had given for the retria
l.
Olmert initially had been acquitted of the Talansky charges in July 2012 by the Jerusalem District Court, which had included two of the same judges, Sobel and Jacob Zaban. Friedman-Feldman was added to the returning judges to replace Musia Arad who retired.The state appealed Olmert’s acquittal to the Supreme Court and in the summer of 2014, the Supreme Court had sent the case back to the district court for a retrial when shocking new recordings of Olmert discussing the original trial with his top former aide of 30 years, Shula Zaken, emerged.Zaken had refused to testify in the first trial, which also excluded a key journal of evidence of hers against Olmert from being presented and did not let on about the existence of the recordings until the appeal to the Supreme Court.
Accordingly, Olmert’s lawyers said the retrial ordered by the Supreme Court was to focus solely on these new issues, and accused the judges of re-raising older and unrelated issues beyond the Supreme Court’s instruction.
Rozovsky went further, accusing Friedman-Feldman of bias, since in her opinion convicting Olmert, she wrote that she also would have convicted him in the first trial, without the new evidence.The appeal claims this explicit statement proved she had made up her mind before even hearing the new evidence and was biased against Olmert.Next, the appeal attacks the court’s characterization of funds Olmert directed to be paid to Zaken as illegal personal payments as opposed to permitted political payments.In the retrial, the court had found that the Zaken recordings were not just key evidence, but significant enough to change its conclusion from acquittal to conviction.The state, the court said, had proven beyond a reasonable doubt that at least $153,950 of the over $600,000 Olmert was accused of using for illegal personal use, in fact, was used illegally.
Most significantly, the court found that a recording of Olmert telling Zaken she could take funds from a secret safe for her illegal use contradicted and torpedoed his narrative that he did not know about the funds or assumed they were being used for permitted political purposes.Rather, the court said Olmert’s statements to Zaken in the recordings eliminated the slight doubt they had had about his awareness of the funds being used illegally, which had paved the way to his 2012 acquittal.
Rozovsky slammed this finding, saying Zaken had testified that all of her overtime efforts were targeted to eventually help make Olmert prime minister.In that sense, said Rozovsky, all payments to Zaken above her regular salary were for overtime political work to build Olmert’s political future.In the conviction decision, the court had also slammed Olmert for failing to testify in the retrial to rebut all of the new evidence against him, including explaining the recordings that appeared to show that his testimony in the original case was false.
Olmert’s lawyers attacked that finding and said the former prime minister had testified so extensively in the original trial that there was no need for him to do so again in the retrial and that it was ridiculous to penalize him for deciding that testifying again was extraneous and unnecessary.Slamming what they said was an overly strict sentence of eight months in jail, Olmert’s lawyers doubled-down on their request to the district court for no jail time and a mere six months community service.Backing up their request for leniency, Olmert and his team had rolled out letters to the court from former British Prime Minister Tony Blair and former Mossad head Meir Dagan to describe his contributions to the state’s security and image on the world stage.
Rozovsky stated that the court had not given these issues proper weight in reducing the severity of Olmert’s sentence.
He also argued that the court had given Olmert eight months jail time for the Talansky Affair while giving him none in the related Investment Affair (for which Olmert got a minor conviction in July 2012), relating to the granting of favors in his capacity as a minister to his confidante Uri Messer despite a conflict of interest.Olmert’s appeal said it was legally inconsistent for the two sentences to be so different.
In contrast, the district court had rejected this argument, stating that the Talansky Affair crimes were much graver than the Investment Affair crimes.