The David's Sling Brigade was originally created to strike advancing tank formations; Now it is preparing for urban warfare against Israel's asymmetrical enemies. 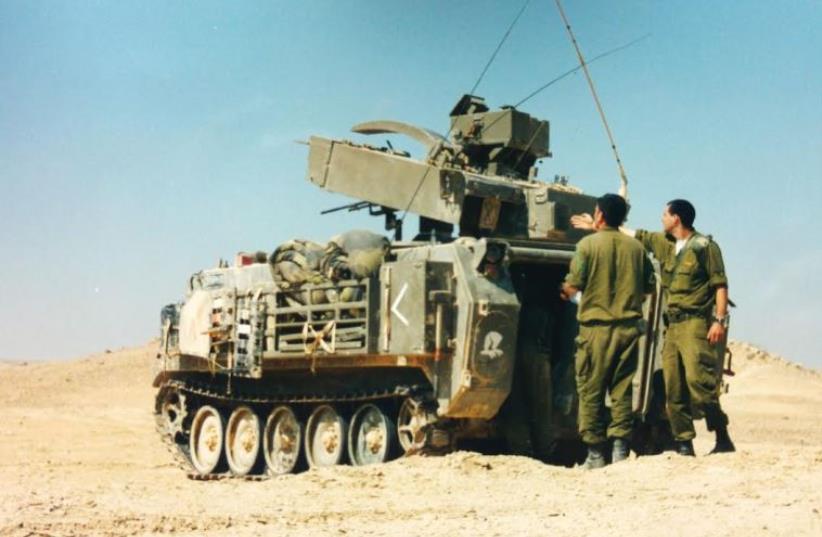 Hafiz missile launcher, used to fire the Tamuz
(photo credit: IDF SPOKESMAN’S UNIT)
Advertisement
The story of the “David’s Sling” Artillery Brigade reflects, in ways few other units do, the radical transformation of Israel’s security environment over the past decades. Today the brigade has the ability to fire a missile through a living-room window.Originally set up after the 1973 Yom Kippur War to destroy advancing enemy tank formations with antitank missiles, the unit today specializes in precision strikes in urban warfare settings, targeting enemies embedded in Lebanese and Gazan civilian population centers.“The brigade is not an ordinary artillery unit,” Col. M., commander of the brigade, told The Jerusalem Post recently.He noted its special components, including the Meitar and Moran units that fire guided surface-to-surface missiles, often hitting with pinpoint accuracy targets beyond the line of sight. The brigade also includes the Sky Rider Unit – the only one in the IDF’s ground forces that operates its own tactical drones.“The challenge today is targeting an enemy in an urban setting, with all of the restrictions.It is about identifying the enemy and striking it and it only, and not hitting noncombatants. We cannot bring down a whole building because of one suspect who is there. We must be very precise,” Col. M said.Young officers have to know when to order strikes, and also, “when to stop,” Col.M added, referring to their responsibility for making life and death decisions under intense pressure.The brigade has become known as the most air forcelike unit in the ground forces, due to its precision fire capabilities and drones.“Some in the air force jokingly calls us one of their best squadrons,” the commander said. The unit must forge and maintain close ties to the IAF, to ensure its drones do not collide with the IAF’s platforms. The brigade is also responsible for calling in air strikes to assist ground forces during engagements on the battlefield and in maneuvers.In the 1970s, the unit was dubbed the “judgment day weapon” due to its role in stopping what was then an existential threat – the conquest of Israel by Syrian or Egyptian armored forces.Now that this threat has vanished, the brigade faces the 21st century threats of Hezbollah and Hamas, and potentially jihadists in Syria.These groups could attempt to overwhelm Israel’s home front with rocket barrages, and attack the country’s borders with suicide bombers armed with shoulder-fired missiles.The brigade incorporated the Sky Rider tactical drone Unit in 2011. Today, the drone has become central to all IDF operations, Col. M. said.“No battalion commanders will go anywhere without it,” he stated. “We deploy drone crews in every sector.As young as it is, this unit is already highly valued.”Drone unit soldiers carry the Sky Rider and its mobile command equipment on their backs, meaning they must navigate terrain carrying 50 percent of their body weight.Today, drone-equipped soldiers can be found on all the country’s borders and in the West Bank, providing overthe- hill reconnaissance assistance to infantry and armored corps.In 2014, the IDF revealed that Meitar Unit is responsible for firing the Tamuz, known outside of Israel as the Spike. The fourth generation man-portable fire-and-forget anti-tank guided missile and anti-personnel missile, which has a tandem-charged HEAT warhead, is manufactured by the Rafael Advanced Defense Systems. Most details on the brigade’s missile capabilities remain classified.The missile units are composed of personnel “who work with their brains, less with their muscles,” Col. M.said.He declined to provide additional details, saying only that “They leave no stone unturned to generate new techniques. They are creating the next battle doctrine, and using their [combat] systems in ways that the system designers did not think of.”