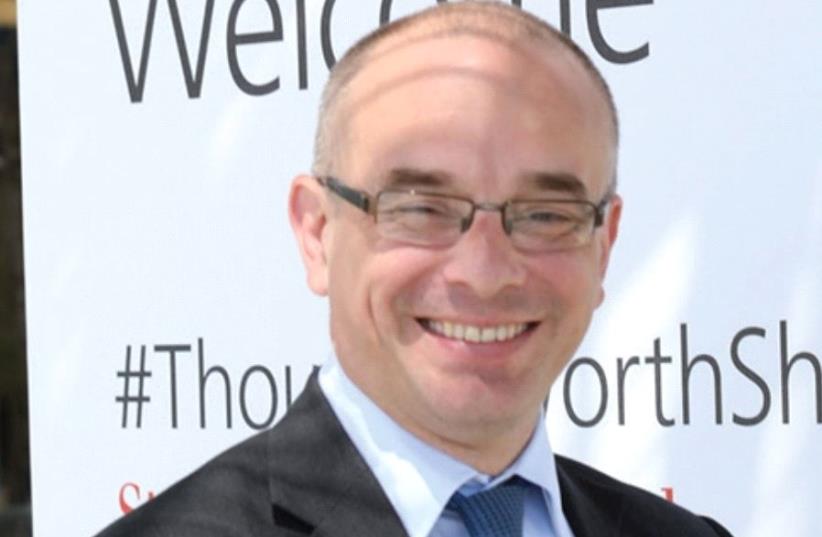 PAUL DONOVAN
(photo credit: RONEN MACHLEB)
Advertisement
With an “environmental credit crunch” looming over the globe, only a diverse and inclusive working sector will be able to innovate economically efficient solutions to today’s growth constraints, a senior economist stressed at a conference in Tel Aviv.“Innovation comes by making sure that we maximize human capital – we make the most out of people’s inherent abilities, their potential,” Paul Donovan, global chief economist at UBS Wealth Management, said on Thursday.Donovan was addressing participants in a conference called “Thoughts Worth Sharing – Staying One Step Ahead,” held on Thursday by Swiss global financial services provider UBS, at Tel Aviv University’s Porter School for Environmental Studies. In a session focused on the world’s shifting economic landscape, he and his fellow speakers looked at some of the growth obstacles facing countries today and how entrepreneurs can best make a sustainable impact in this new era.Asking whether “an economic dark age” is inevitable, Donovan explained that one of the biggest challenges in today’s economy is “the consequence of a credit crunch.”This so-called credit crunch is not, however, a financial credit crunch, which he said has largely worked its way through the global economic system.“The problem today is we are facing an environmental credit crunch as well,” Donovan said.When people rely on credit, they are lowering their future standard of living in order to have a better standard of living today, he explained.“If I burn a barrel of oil today to heat my house, I am raising my standard of living today,” Donovan continued. “But I am accepting that that oil will not be available to heat my house in the future.”“The consumption of environmentally finite resources or the overconsumption of environmentally renewable resources is something that creates credit,” he added.A credit crunch happens when people are no longer able to borrow money – a situation that occurred during the 2008-2009 economic crisis, he explained. While a financial credit crunch no longer poses a threat today, an environmental credit crunch is already going on now, according to Donovan. For example, he said, China has been building huge numbers of coal and gas-fired power plants over the past five years – and yet, the country is soon going to have to shut many of these stations down.“There isn’t the water to cool the power stations. They have run out of water,” Donovan said. “They are no longer able to engineer power, which means their growth is being constrained by an environmental limit.”As resources are continually depleted, the global population has two options: either experience a decline in living standards or “do more with less” – increase output while reducing input and foster “innovative growth,” he explained.Today, the world is also plagued by huge inefficiencies, illustrated by the fact that 50% of food is being wasted in both the United States and in India, Donovan continued.“The difference is that in India, it never gets to the consumer,” he said.Only by building a diverse and inclusive working economy – maximizing people’s potential and individual abilities – can the world hope to overcome such inefficiencies, according to Donovan. For example, an employer cannot tell job applicants that they are brilliant, but then not hire them simply due to gender, sexual orientation or nationality, he said, citing Saudi Arabia, Russia and the US as problem countries in these three respective areas.“Innovation and diversity become so important,” he said.While Israel may be considered the Start-Up Nation and a hub for innovation, the hi-tech sector still has a long road ahead toward achieving greater diversity. Women in particular are still facing a number of challenges, according to several female entrepreneurs who spoke on a panel later in the session.One main problem that women face is getting investments, or even “daring to ask for investments,” said Yali Harari, co-founder and CEO of Innovesta, a digital platform for early stage equity investments.Only about one out of 10 private equity or venture capital investments in Israel is in a start-up led by a woman, she said.“There are also not enough women who step up to the challenge,” Harari added.One solution, in Harari’s mind, could be a trend of more and more women investing in women, and an across-theboard, conscious decision to simply give women a chance, she continued.“I actually think we were born to be entrepreneurs,” Harari said. “I think all the traits we have in our cells make us a better entrepreneur.”As the global innovation scene becomes increasingly diverse, however, Donovan warned of resultant political challenges, because “generally speaking, people don’t like change.”Structural changes that require different skills also cause a certain demographic to be left behind, he explained.As a result, leaders must recognize that a group of people is going to be hurt by the shift and take action to mitigate the damages and prevent scapegoat politics, he added.“People who are scared of change and who feel like they are being deprived of opportunity because of change will look to others to blame,” he said. “You end up with this blaming of foreigners.”As the global economic landscape continues to shift and innovators adapt to a rapidly changing reality, Donovan stressed just how critical overcoming the ongoing “environmental credit crunch” remains.“This is not some abstract mythical future scenario that academics write papers about,” he said. “This is happening now.”