Jerusalem Day protestors: ‘There is no holiness in an occupied city’

Hundreds protest against ‘march of hate and racism’ in Jerusalem 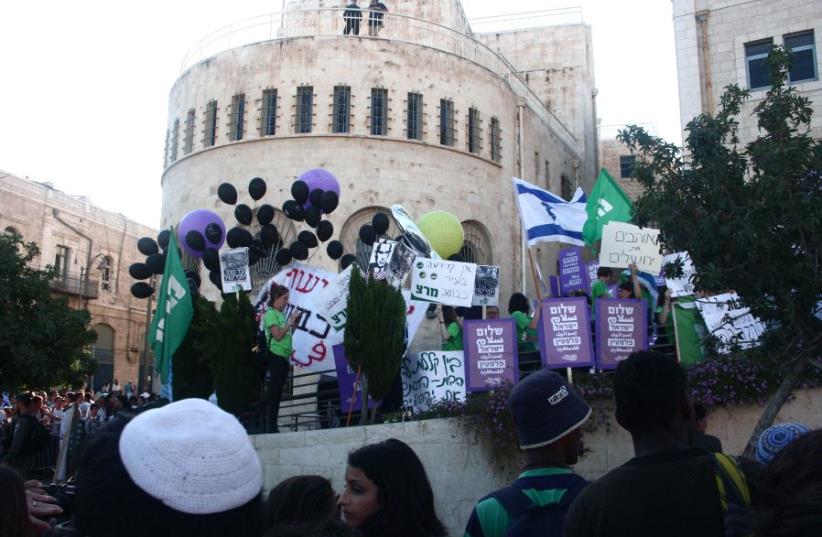 Protestors gathered in Tzahal Square near the Jerusalem Municipality across from the Old City to protest against the Jerusalem Day March, May 24 2017.
(photo credit: UDI SHAHAM)
Advertisement
Some 500 people gathered on Wednesday in Tzahal Square near the Jerusalem Municipality across from the Old City to protest against the Jerusalem Day March.The left-wing activists labeled their protest “an act against racism, hate and violence,” and called to set “a new agenda of peace and equality in Jerusalem.”The protest was organized by several NGOs and movements, including Meretz, Combatants for Peace, Standing Together and others.During the demonstration, the protesters repeated different chants aimed at the marchers, saying, “You have no shame, there is no holiness in an occupied city,” and a paraphrase of the wellknown prayer, “Next year in Jerusalem without hate.”Doron Aruch, a Standing Together activist and one of the organizers of the protest, told The Jerusalem Post that the aim of the demonstration is to call out the true face of the Jerusalem Day March. “It seems nice and positive from the outside, smiling people singing and dancing” she said.“But this is a false image – what they actually do is spread hatred and fear. They are racist and violent. While standing here, they shouted at us, ‘Death to left-wingers’ and threw sticks at us,” she added. “They go through Muslim neighborhoods in east Jerusalem and chant ‘Muhammad is dead,’ to insult the locals. We are here to defy that.”Aruch said one of the goals of the protest is to stress that there are people living in Jerusalem that want to make the city a home for both Jews and Muslims. “We want to bring together all branches of society – Israelis and Palestinians, Ashkenazi and Mizrahi and seculars and religious people,” she added.Jerusalem City Council member Laura Warton, who represents Meretz, criticized the municipality and government for allocating NIS 25 million for the celebration.“This is a disgrace,” she said.“The residents of city are expecting to get proper infrastructures, roads and welfare.Instead they get photos of [Jerusalem Mayor Nir] Barkat on the city walls. There is no cause to celebrate here.”Alon Ziv, chairman of the Labor Party students group in the Hebrew University, said that his group joined the protest out of love for Jerusalem.“We love our city and feel deep connection to it, but the way it is being celebrated now is intolerable,” he said. “If they would go through a different route – one that don’t spark clashes – we wouldn’t be here. But we believe that this a genuine way to promote a more peaceful discourse in the city.”Across from the protest gathered some 50 people, mostly teenagers, and shouted curse words at the demonstrators.“You are traitors,” they said, “all left-wingers must die.” Some of them were holding signs saying “Jerusalem is our heart, it cannot be divided.”One of them, who preferred to stay anonymous, said that the phenomenon of not celebrating the unification of Jerusalem and protesting against it is irritating, but it will not break their spirit.“We are here to have fun and celebrate the love for our city,” he said. “Luckily, they are just a minority,” he added.