Togo proposes hosting Israeli-African summit in its capital next year

The announced plans come just two weeks after President Gnassingbe’s brother-in-law, Marcel Alain de Souza, was in Israel and invited Netanyahu to a summit in Nigeria later this year. 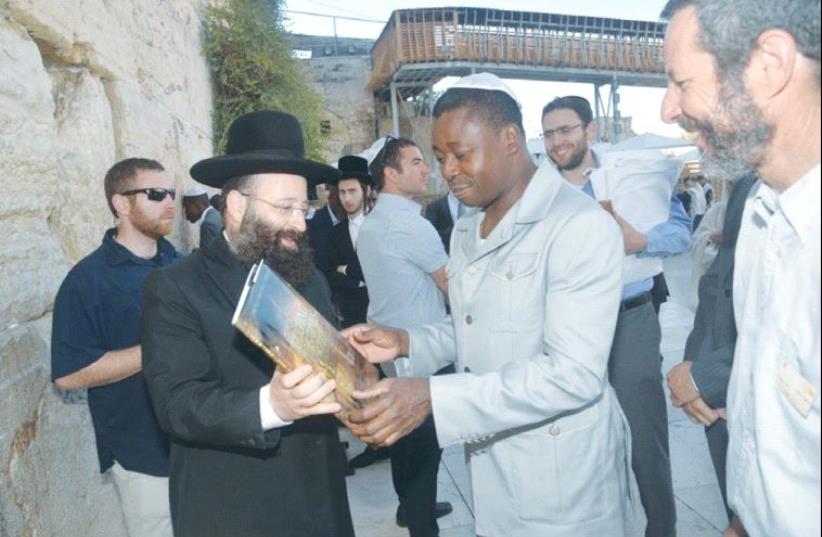 TOGO PRESIDENT Faure Gnassingbe receives a book from Rabbi Shmuel Rabinowitz during a visit to the Western Wall yesterday.
(photo credit: WESTERN WALL HERITAGE FOUNDATION)
Advertisement
Visiting Togo President Faure Gnassingbe will take the lead in organizing the first African-Israeli “security and development” summit in his nation’s capital of Lomé next year, diplomatic sources told The Jerusalem Post on Thursday.Prime Minister Benjamin Netanyahu is likely to participate in the conference, expected to convene in March or April, some 60 years after Israel established formal ties with Ghana, the first African country with which it did so, in 1956.Gnassingbe and Netanyahu agreed during their Wednesday meeting in Jerusalem “on the organization of an Israeli-African summit on ‘security and development’ to strengthen cooperation ties between Israel and Africa,” according to a communique from the Togo president.A member of Gnassingbe’s entourage said the conference will include African leaders and business people from throughout the continent, but added it is too early to say which countries will attend.The announced plans come just two weeks after Gnassingbe’s brother-in-law, Marcel Alain de Souza, was in Israel and invited Netanyahu to a summit in Nigeria later this year. De Souza is commissioner of the 15-member Economic Community of West African States (ECOWAS). Netanyahu visited four east African states last month, during which he met in Uganda with leaders from seven east African states.He has since expressed a desire to hold a similar meeting in west Africa as well.The source in Gnassingbe’s entourage said Togo views itself as a “good friend” of Israel and “wants to become a hub of friendship between west Africa and Israel.”Organizing the conference will give Togo “credibility and influence in helping Israel come back to the entire region, not only on the political side, but on the business side as well,” he said. Asked if Gnassingbe was worried about negative reactions from North African and Arab states the source said, “Togo is a small country and is not getting billions of dollars from Saudi Arabia and Qatar. The Muslim population in the country is small and not active, so the political risk is low.”The threat of Islamic terrorism is one of the forces behind strengthened ties between Israel and many African states. While Togo has not been hit by Islamist terrorism, terrorist groups have repeatedly struck in nearby Mali and Nigeria.