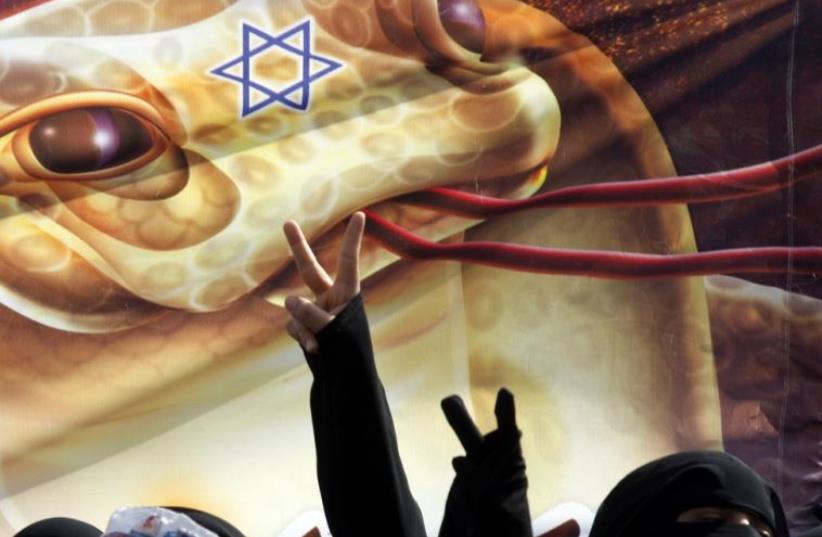 Women take part in a rally calling for boycott on US and Israeli products in Sanaa
(photo credit: REUTERS)
Advertisement
UK Prof. Catherine Hall was markedly absent from this year’s Dan David Prize ceremony at Tel Aviv University after declining to accept the award for political reasons. The BDS (boycott, divestment, sanctions) movement called on her and other recipients to refuse the prize due to “Tel Aviv University’s complicity in the occupation.”On Sunday evening, the Dan David Foundation awarded the prestigious $3 million prize to eight winners for their contributions toward outstanding scientific, technological, cultural and social achievements.Each year the foundation awards prizes that cover three time dimensions that represent realms of human achievement: past, present and future. This year’s categories were “Social History: New Directions” for the past; “Combating Poverty” for the present; and “Nanoscience” for the future.The prizes of $1 million awarded to each time dimension are generally shared by two or more recipients.Hall was set to receive a $300,000 award for the social history category for her work as a pioneer of gender history.She was quoted earlier this month on the Facebook page of the British Committee for the Universities of Palestine as explaining that she had withdrawn from the prize due to an “independent political choice, undertaken after many discussions with those who are deeply involved with the politics of Israel-Palestine, but with differing views as to how best to act.”Ariel David, the son of the late Dan David, announced that her share of the prize money will instead go towards scholarships to history students at Tel Aviv University and around the world.This year’s prize winners included: in the past category – Prof. Inga Clendinnen and Prof. Arlette Farge; in the present category – Sir Anthony B. Atkinson, Prof. François Bourguignon, Prof. James J. Heckman; and in the future category – Prof. Paul Alivisatos, Prof. Chad Mirkin, and Sir John Pendry.“The 21st century is fraught with new and exciting challenges for humanity, and the award winners chose to devote their lives, each in their fields, toward new discoveries to deal with these challenges,” said Prof. Itamar Rabinovich, chairman of the Dan David Foundation.“This is the spirit behind the prize winners for 15 years and this is the spirit that will accompany it in the coming years.”The Dan David Prize is named after the late international businessman and philanthropist Dan David. The prestigious prize stands at the forefront of the world’s academic prizes, alongside the celebrated Nobel Prize.