The board was moved to issue its statement one day after the National Union of Students passed a motion to join BDS. 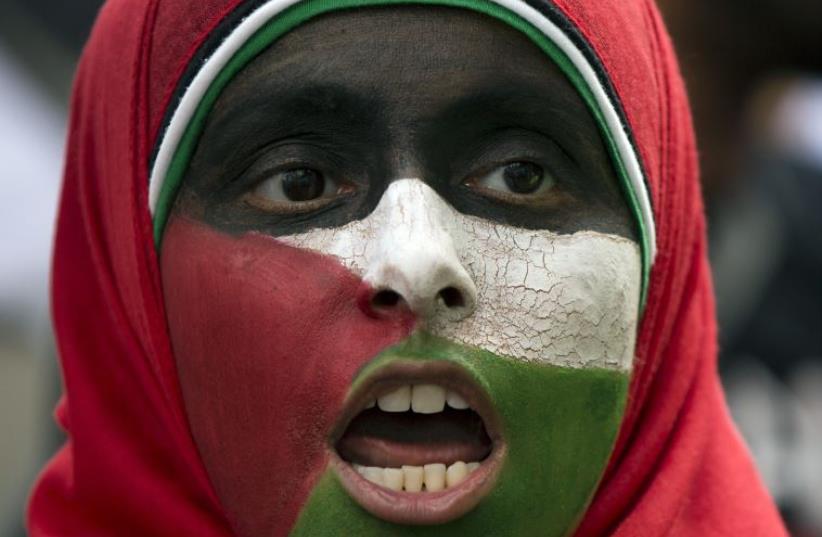 A protester with her face painted in the colors of the Palestinian flag chants during a pro-Gaza demonstration outside the Israeli embassy in London
(photo credit: REUTERS)
Advertisement
An umbrella organization representing the administrative heads of British universities released a statement on Wednesday reaffirming its opposition to an academic boycott of Israeli institutions of higher learning.“The board of Universities UK is committed to the free exchange of ideas between universities and between academics, regardless of nationality or location,” the statement read. “The board therefore firmly opposes academic boycotts on the basis that they are inimical to academic freedom, including the freedom of academics to collaborate with other academics.”The board was moved to issue its statement one day after the National Union of Students passed a motion to join the Boycott, Divestment and Sanctions movement against Israeli companies and firms that do business with Israel.  “Given the reported perception in Israel that UK universities support an academic boycott, the board of Universities UK wishes to confirm its previously stated position that it is firmly opposed to any academic boycott of Israeli universities,” it said. “The board also confirms its view that all universities must uphold, in the interests of free expression of ideas, the fundamental right of academics to question national and international policies.”The student union passed a motion on Tuesday by a vote of 19-14, with one abstention.Foreign Ministry spokesman Emmanuel Nachshon said the resolution has no practical significance, and was passed by a body that has articulated its anti-Israel positions in the past.“Instead of voicing hatred toward Israel it would be better for British students to study a little history and understand that the distance is not that great between verbal hatred and stereotypes and horrible crimes,” he said.Prime Minister Benjamin Netanyahu also weighed in on the subject Wednesday, saying that the British National Union of Students voted against boycotting Islamic State less than a year ago, saying all there is to say about the BDS movement.“ISIS tramples human rights to the dust. It burns people alive in cages and the national student groups in Britain refuse to boycott ISIS and have boycotted Israel,” Netanyahu said at the start of a meeting with new Canadian Foreign Minister Rob Nicholson.