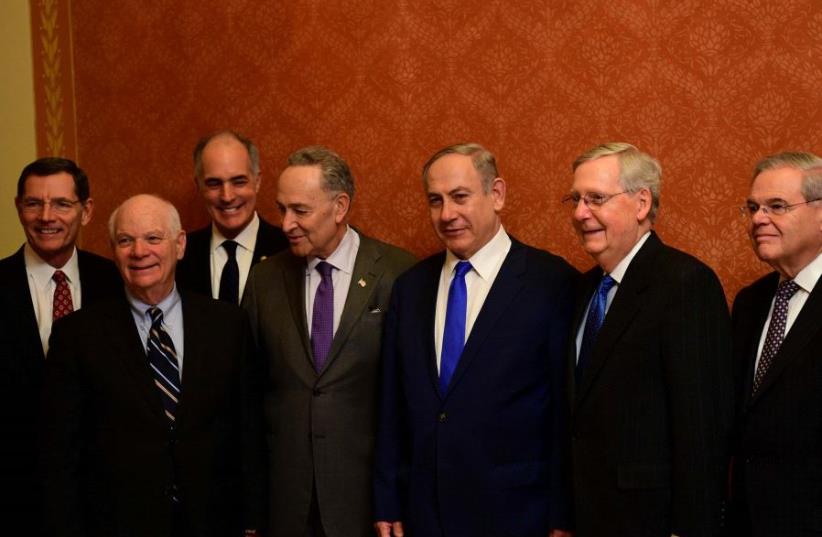 Netanyahu and US Congress members, including Senator Chuck Schumer next to the prime minister on the left
(photo credit: AVI OHAYON - GPO)
Advertisement
WASHINGTON – Marking 50 years since the start of the Six Day War, the US Senate on Monday passed a resolution celebrating Jerusalem as Israel’s “undivided capital” and calling on the Trump administration to move the American Embassy there.The nonbinding measure was introduced by Senate Minority Leader Chuck Schumer, the chamber’s top-ranking Democrat, and passed with overwhelming bipartisan support, 90-0.By passing the resolution, the Senate reaffirmed its support for the Jerusalem Embassy Act of 1995, which compels the State Department to relocate its embassy in Israel from Tel Aviv to the capital.US President Donald Trump waived that requirement last week, citing national security interests, as every president has done every six months for the past 22 years.“It is very fitting that the Senate passed this resolution 50 years to the day of the start of the Six Day War,” Schumer said in a statement. “The semi-centennial of the reunification of Jerusalem is an important milestone for Israel and Jewish people across the globe, given that Jerusalem has been a focal point of Jewish life for thousands of years.”Congress is to mark the occasion with a Capitol Hill event on Wednesday co-hosted by the Knesset.