Israeli physicians in protocols revealed at Knesset said counterparts wanted to see if children of Yemenite descent had black blood. 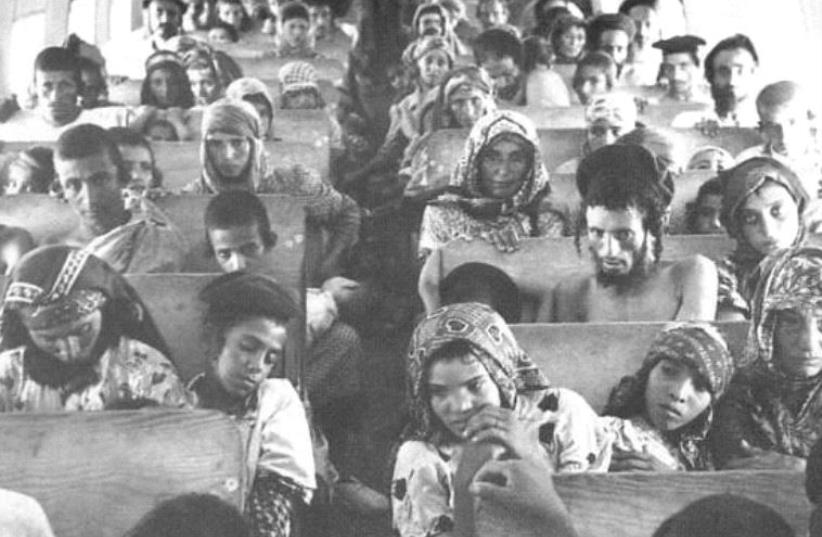 Yemenite Jews en route to Israel
(photo credit: Wikimedia Commons)
Advertisement
An American fund connected to the US National Institutes of Health paid for studies of Yemenite children who died due to rampant medical negligence in the 1950s, protocols of interviews with doctors then involved revealed to the Knesset on Wednesday.The interviews were conducted under oath for a state commission of inquiry headed by the late Supreme Court justice Yaacov Kedmi and initiated in 1995 by then-prime minister Yitzhak Rabin. The commission investigated the mysterious disappearance of hundreds of Jewish infants, most of whom were born to Jews from Yemen who immigrated to Israel in Operation Magic Carpet from 1948 to 1954.Lawmakers and lawyers revealed the protocols as part of the proceedings of the Knesset Special Committee on the Disappearance of Children from Yemen, the East and the Balkans that is headed by Likud MK Nurit Koren and who was appointed by Prime Minister Benjamin Netanyahu.Dr. George Mendel, who headed a children’s hospital in Rosh Ha’ayin, testified under oath to Kedmi’s commission that a colleague had told him he had information about the US National Institutes of Health that gave a pathology institute of an Israeli hospital a sum of 160,000 liras – the Israeli currency at the time – to fund a study on the functioning of Yemenites’ hearts.“The study was intended to determine if and why there were no heart diseases in Yemen,” according to Mendel’s testimony that was sent to The Jerusalem Post. “For this purpose 60 hearts were provided from fetuses at 42 weeks up to age 42.”Mendel also testified in Hebrew that an American doctor came from the US, examined the Yemenite patients and said he thought they had blood of kushim,” a derogatory term used by Israelis for blacks. The doctor was referring to sickle cell anemia.Likud MK Amir Ohana read aloud from testimony from doctors at the Rosh Ha’ayin children’s hospital in the 1950s about why 80% of Yemenite children brought to the hospital were dying.The testimony said the children were given numbers, but that the numbers were often mixed up, resulting in children receiving the wrong medicines and treatments.“The word for the lack of treatment they received was not negligence but murder,” Ohana said.Attorney Meir Broder of the Health Ministry legal department responded to the committee, saying there were studies of bodies after their deaths. But he vigorously denied that children were taken and killed.“The law at the time was very liberal regarding allowing surgery on bodies for research,” Broder told the committee. “Fifty percent of bodies at the time had surgeries to determine the reason for death. It was allowed at the time without family consent. Today, it obviously would not happen.”Koren told the Post she fully believed the testimony revealed to her committee was correct. Pictures were revealed to the committee of live Yemenite children with body parts, such as “spleen,” labeled on them.“It is shameful that American doctors were involved and that this is how they behaved with human beings,” Koren said.In response to a request for comment from the US National Institutes of Health, a public affairs specialist said any relevant information could only be released after the filing of a freedom of information request.