Congressional sources say Israel has made an initial request for its annual US defense aid to increase to as much as $5 billion. 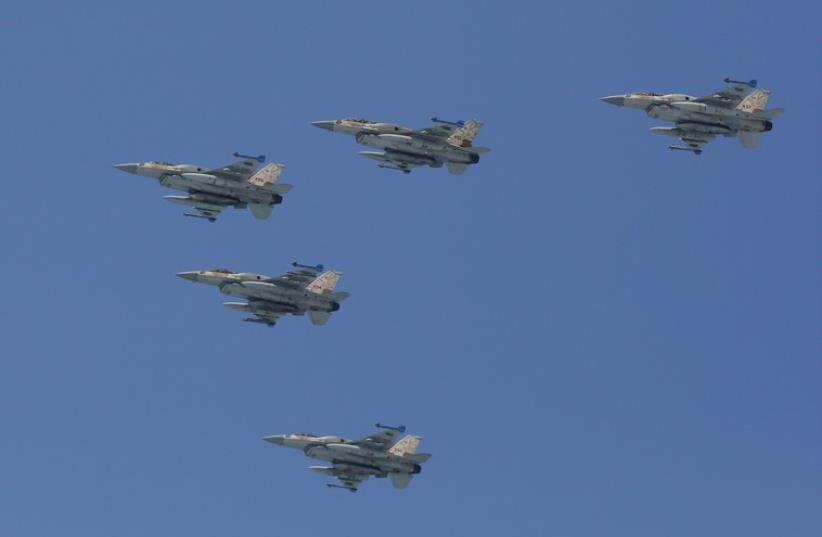 IAF planes fly during an aerial show over the Mediterranean Sea as seen from a Tel Aviv beach, as part of Independence Day celebrations, April 23, 2015
(photo credit: REUTERS)
Advertisement
WASHINGTON -- Defense cooperation between the United States and Israel is a two-way street, with both contributing to the security of the other, Defense Secretary Ashton Carter said in an interview published on Wednesday.His comments to the Atlantic were in praise of Israel's technological advances in warfare, specifically in cyberspace and in countering improvised weapons technologies from non-state actors. "It’s a two-way relationship," Carter said. "There’s no question that it’s not symmetric, but it is two-way— we really do get things from the Israelis in technology.""I hesitate to make invidious comparisons, but if you’re making comparisons to, say, the European legacy arms [industry], the guys who have made the tanks and planes and ships in Europe, they’ve been very slow to come out of the industrial age," he continued. "The Israelis you will find to be more clever and more innovative."Carter had just met with his Israeli counterpart, Moshe Ya'alon, in preparation for a highly-anticipated meeting between US President Barack Obama and Prime Minister Benjamin Netanyahu scheduled for next week. The two are expected to discuss the new security environment of the Middle East after the Iran nuclear deal was reached in July.Carter said that the US, without question, "can or will maintain" Israel's qualitative military edge over its its regional neighbors– "the sum of all Sunnis," according to the secretary. He said that Israel worries about potentialities such as a collapse of the Saudi monarchy, among other dire security scenarios."State collapse in the Middle East," Carter noted, "is the phenomenon of our time."Obama will host Netanyahu at the White House on November 9.  US officials: Israel wants up to $5 billion in annual military aidUS congressional sources said on Wednesday that Israel has made an initial request for its annual US defense aid to increase to as much as $5 billion when its current aid package, worth an average $3 billion a year, expires in 2017. Israel wants $5 billion per year in military aid for 10 years, for a total of $50 billion, the congressional aides said. It has been signaling that it wants more money to counter threats it says will arise as a result of the international agreement on Iran's nuclear program, which Israel's government has staunchly opposed.Congressional and other US officials cautioned that negotiations on the new aid deal were still in the early stages and the proposal is not yet at the stage where it has been formally brought to Congress, which must approve the funds."First they have to negotiate with the White House," one senior congressional aide said of Israel.Israeli government spokesmen declined to provide details on the defense aid talks.One US official said the Obama administration was unlikely to fully meet the Israeli request, and predicted the sides would settle for an annual sum of between $4 billion and $5 billion.Israel has also secured hundreds of millions of dollars in additional US funding for missile defense in recent years.Netanyahu put the brakes on aid talks with Washington in the run-up to the Iran deal that was reached in July, signaling his displeasure with the negotiations. Before he did so, Israeli and US officials said they were looking at a new aid package worth $3.6 billion to $3.7 billion annually.Both sides have said that figure could rise after the Iran deal, which will place curbs on Iran's nuclear program in exchange for an easing of sanctions against Tehran.Israel argues that Tehran's financial windfall from sanctions relief will allow it to increase backing for proxies that are hostile to Israel in Syria, Lebanon, the Palestinian territories and elsewhere.