'Nothing like having a nice Jewish professor attack Israel' 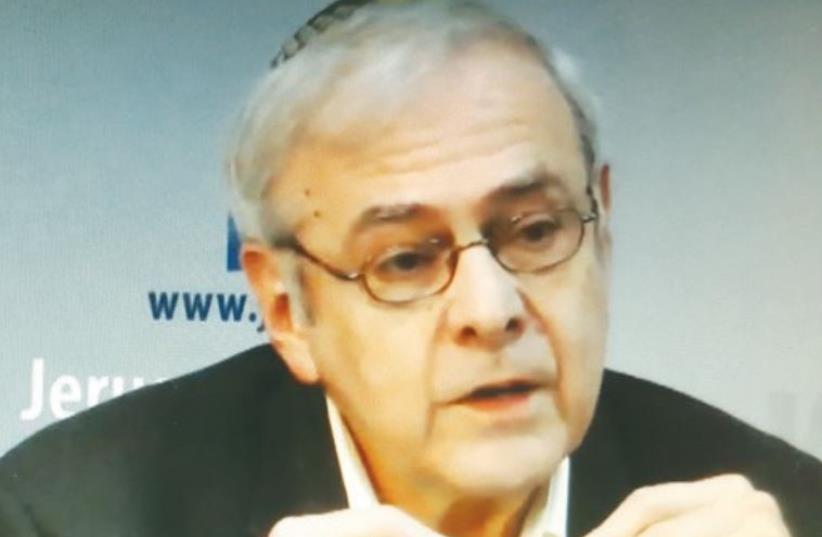 MERVIN VERBIT
(photo credit: HERB KEINON)
Advertisement
Rather than re-branding itself as a land of beautiful beaches and great food, Israel can improve its position on US campuses by recasting itself, reconstructing the framework through which the country is seen, said Mervin Verbit, president of a new organization aiming to build a better appreciation of Israel among professors.The moral framework on American campuses about Israel used to be – up until the 1990s – that Israel was a great, gritty little country, and that Israelis were “our kinds of folks,” said Verbit, whose organization is called the Academic Council for Israel.“If that is the attitude, then people understand what happens within that general framework,” he explained during a visit to Israel last week. “If that framework weakens, then slowly people can come to see things in a negative light.”The Boycott, Divestment and Sanctions movement, he said, is pernicious not because it poses an economic threat to Israel.It is dangerous, because “even when they lose, they win – they open up things for discussion and generate debate topics, which are then an important first step to undermining Israel’s legitimacy,” he asserted.Verbit, a professor and chairman of the sociology department at Touro College in New York, said that up until the early 1990s, Israel and pro-Israel professors on US campuses were working actively to strengthen the understanding of the country, its history, politics and culture, in order to get professors to understand that it is appropriate to stand behind Israel on strategic and moral grounds.In the early ’90s, however, Israel became less interested, and there was less contact and cooperation, as well as less financial support for lectures, journals and one-on one meetings between professors and Israeli influentials, he said.There was a feeling at the time in Israel that good policy did not need hasbara (public diplomacy), as well as a school of thought in Jerusalem that held that Israel could “take care of itself completely without help,” Verbit said.The Arabs, however “kept going,” he said. “They watched how we did it over the years, framed their arguments in academic terms. We stopped, and they kept going.”About 10 years ago the government once again understood the importance of working with professors on US campuses, so it was picked up again, but now there are a number of various organizations working on different campuses, and without coordination.That is a gap the organization that he heads hopes to fill: “to serve as the bridge among professors, and between professors and students working for Israel, as well as do some of the academic work [about Israel-related issues] that professors do best for themselves.”What the Arab groups have done on campus, he said, is make Israel’s legitimacy – the fact that it is made up of “our kinds of folk” – debatable.“The Arab perspective is long range, even if they don’t win today or tomorrow, if they manage to erode support for Israel over time, it will pay off,” he said. “They believe that if you just weaken the support for Israel, then history will give them the opportunity to capitalize on that.”Verbit agreed that a line can be drawn from the attitudes of US college professors, and the current debate with the Democratic Party about its platform on Israel.Noting that the positive light in which many professors framed Israel on campuses some 25 years ago has changed, Verbit said that “education is what you remember after you forgot everything you learned. The framework is what sticks,” he said, and if students spend their years on campus hearing Israel placed in a negative framework, then when they go out into the world – when they join, for instance, the local Democratic Party committee – that framework stays with them.His organization numbers about 150 professors from around the US, about 15 percent of whom are not Jewish, and is focused on dealing with faculty at the various colleges and universities.Among the most problematic professors for Israel are anti-Israel Jewish ones, he said. “There is nothing like having a nice Jewish professor attack Israel, and an Israeli professor is even better,” he said.“In many professions, colleagues are willing to be approached by other colleagues,” he said. “Professors listen to other professors.“I am convinced most professors are honest,” he asserted.“They know what they read in the press, and what the advocacy organizations tell them.”He wants to get them material that they will actually read, which is of an academic nature, and which paints a fair picture.Verbit has experience bringing professors to Israel, and said that when you bring “open minded academics, most are willing to learn, and it changes them.”