Wave of violence sweeping Israel is 'terrorism,' US says

The White House is "deeply concerned" by the terror wave, a senior official told the 'Post' earlier in the week. 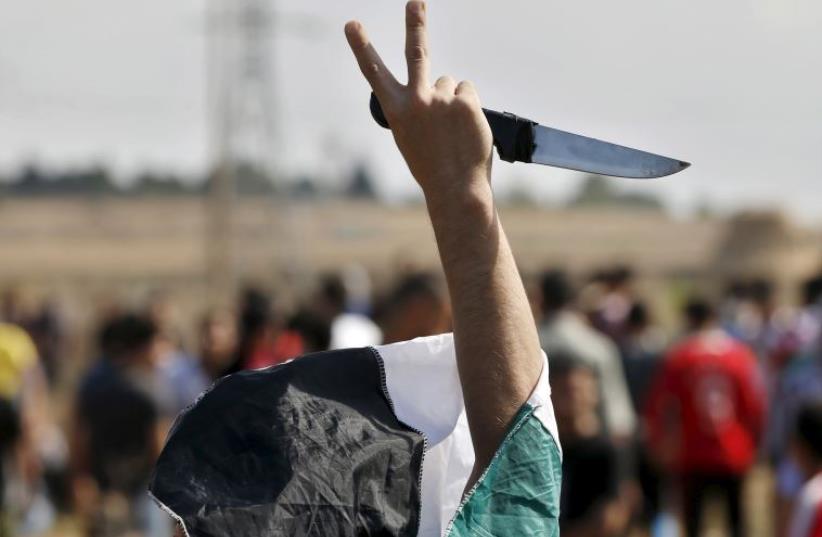 A masked Palestinian protester holds a knife during a protest near the Israeli border fence in northeast Gaza
(photo credit: REUTERS)
Advertisement
WASHINGTON - The Obama administration characterizes the recent wave of violence sweeping Israel as "terrorism," a US official told The Jerusalem Post on Friday.A State Department official had previously told the Post the administration would refrain from using the term pending a full investigation of the attacks. But the tempo of violence only increased in recent days, with over fifteen attempted or successful stabbings and shootings of Israelis by Palestinians across the country and throughout the West Bank.One attack perpetrated by a Jewish Israeli against four Arab Israelis also occurred in Dimona earlier in the day, raising the specter of revenge strikes and vigilantism. Israeli officials warned against such actions in a press conference on Thursday evening.The White House is "deeply concerned" by the terror wave, a senior official told the Post earlier in the week. Obama administration officials are in contact with their Israeli and Palestinian counterparts in an effort to lower tensions and control the situation.A Jewish man stabbed and wounded four Arabs in southern Israel on Friday in an apparent reprisal attack for Palestinian violence during the worst spell of civil unrest in the region for several years.In the past 10 days, four Israelis have been shot or stabbed to death in Jerusalem and the occupied West Bank, and at least a dozen have been wounded by Palestinians wielding knives or screwdrivers in stabbings in Tel Aviv and other Israeli cities.Three Palestinians have also been killed, and scores wounded in clashes with Israeli security forces during stone-throwing demonstrations in East Jerusalem and across the West Bank, leading to talk of a third Palestinian uprising, or intifada.Palestinian anger is largely focused on events at the al-Aksa mosque compound in Jerusalem's Old City and fears that Israel is trying to change the status quo at the holy site, revered by Muslims as the Noble Sanctuary and by Jews as the Temple Mount.Prime Minister Benjamin Netanyahu has denied wanting to change conditions under which Jews are allowed to visit the site but bans non-Muslim prayer, but his assurances have done little to quell Palestinian anger.Both Netanyahu and Palestinian President Mahmoud Abbas have called for calm and Palestinian police are continuing to coordinate with Israeli security forces to try to restore order, but there are few signs of the tension and violence dying down.Palestinian protests were planned in Jerusalem and West Bank cities after Muslim prayers on Friday, and Israel has deployed thousands more police and soldiers. Muslim access to al-Aksa has been restricted to men over 45 and women.In the latest attack, a Jewish man in his 20s stabbed four Arab men in the southern Israeli city of Dimona, police said, adding that the motive was "nationalistic".The mayor of Dimona said the assailant was a resident of the city who was known to police. During questioning, police said the attacker described all Arabs as "terrorists."Hours later, a 14-year-old Jewish boy was stabbed and wounded by a Palestinian in the Old City of Jerusalem, a woman believed to be Palestinian tried to stab a guard at a bus station in north Israel, and a Palestinian stabbed a policeman near a Jewish settlement in the West Bank, Israeli police said.The policeman's attacker was shot dead, police said.On Thursday, seven Israelis were stabbed in four separate incidents across the country, including the commercial capital Tel Aviv, fueling concerns about a wider uprising following those of the late 1980s and early 2000s.The violence now is on a much smaller scale than then but mistrust between Israel and the Palestinians is deep after their last negotiations ended in April 2014 without progress.A new intifada would further complicate efforts by world leaders to resolve conflicts in Syria, Iraq and Yemen, and there is little appetite to re-engage in peace efforts between Israel and the Palestinians after many failures in the past.The chances of peace talks resuming before US President Barack Obama's term ends appear slim.Reuters contributed to this report.