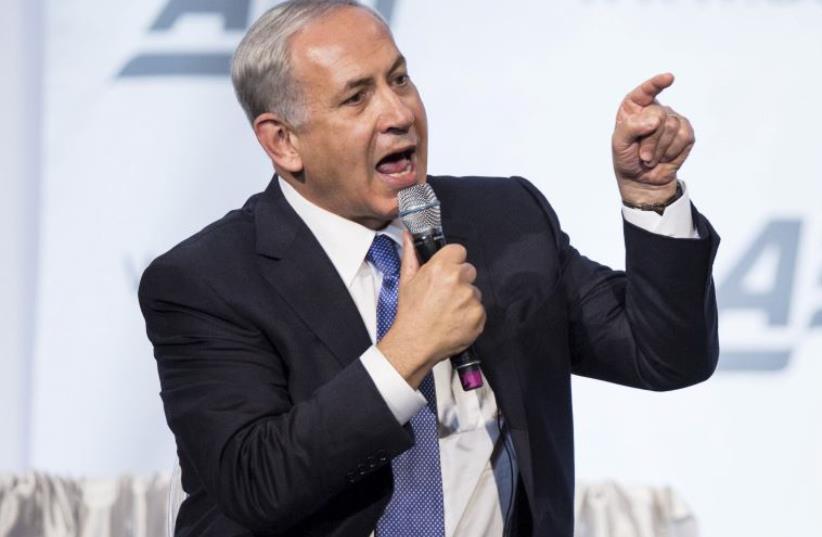 Prime Minister Benjamin Netanyahu gestures as he speaks at the American Enterprise Institute annual dinner in Washington
(photo credit: REUTERS)
Advertisement
WASHINGTON – A refusal to accept the Jewish state’s right to exist, alongside the right for a Palestinian state, is preventing peace between Israel and the Palestinians, Prime Minister Benjamin Netanyahu said on Tuesday at the Jewish Federations of North America conference in Washington.Fresh off a positive Oval Office meeting with US President Barack Obama a day earlier, the premier, in a wide-ranging speech, recommitted his government to the two-state solution.
Jpost TV: Netanyahu and the Democrats
But he denied that settlement activity is at the root of the conflict.“The truth is, the reason we don’t have peace yet with the Palestinians is not because of the settlements or territorial disputes,” Netanyahu told the annual gathering of the JFNA, noting that settlement construction in the West Bank began several decades after the conflict began.
Jpost TV: Netanyahu in the US - The Republican View
“The reason there isn’t peace is the persistent Palestinian refusal to recognize the Jewish state in any boundaries.”The PLO recognized the State of Israel in 1993. But the Palestinian Authority, an organ of the PLO, still calls for Palestinian refugees’ “right of return” to within the Green Line, in addition to the creation of an independent state for the Palestinian people, raising fears in Israel that the organization seeks two Palestinian states.In his speech, as he has in the past, Netanyahu outlined his theory for this “persistent refusal” – a stubborn hatred of the Jewish people, now manifested in anti-Zionism.“The lies leveled against the Jewish people, are now leveled against the Jewish state,” he told the confab.Double standards are a consistent diplomatic reality for Israel, the prime minister said. But they are also a part of the reality of its founding: There has been a consistent refusal to accept the Jewish people as a community with the right to govern itself.“Israel is not a perfect country, but it is judged by a standard that is applied to no other country and that no country can possibly meet,” Netanyahu said. “You know what that is? It begins with an ‘a’ and ends with an ‘m,’” he said, in reference to anti-Semitism.“There’s a special standard for the democracy called Israel,” he added.Netanyahu is in Washington primarily to meet with US officials.But he also accepted an award on Monday night from the conservative American Enterprise Institute, and will speak to the liberal Center for American Progress on Tuesday afternoon.The White House meeting focused on a future US defense assistance package to Israel, which will replace the current program, worth $3 billion a year, once it expires in 2017. A senior administration official told The Jerusalem Post that the US is open to discussing Israeli requests for an increase to that funding.“We’re not ruling out an increase in our military assistance, but these discussions remain in the early stages and figures have not yet been discussed,” the official said. “We are committed to a bottom-up review focused on Israel’s needs.”At the Jewish Federations event, Netanyahu noted that defense “is very, very expensive,” and “gets more and more expensive over time.” His government seeks an increase for the next decade-long package to $5b. a year.That is not only because of the increased costs of defense, but also because of the evolving security environment in the Middle East. “The president and Netanyahu discussed the overall situation in the region, including Syria, ISIL, and Iran’s destabilizing activities,” the US official added.The deterioration of state structures across the Middle East, and the rise of groups such as Islamic State and the Muslim Brotherhood, may ultimately provide common cause to Israel and Arab states, Netanyahu said. In the battle between modernity and “Medievalism, modernity must win,” he said.Speaking after Netanyahu, White House chief-of-staff Denis McDonough said that the US remains committed to a two-state solution to the conflict.“To get there, actions need to be taken to prevent a onestate solution from taking root instead,” he said.“That means reversing current trends on the ground where settlements and demolitions are imperiling the viability of a two-state solution. Taking such steps will enhance security and stability for Israelis and Palestinians alike while strengthening the voices of peace on both sides,” McDonough said.He added that the Obama administration envisioned that borders of the two states would be based on 1967 lines with mutually agreed swaps.“A viable sovereign Palestinian state living side-by-side in peace and security with a democratic, secure State of Israel is the only real path to peace," he said.