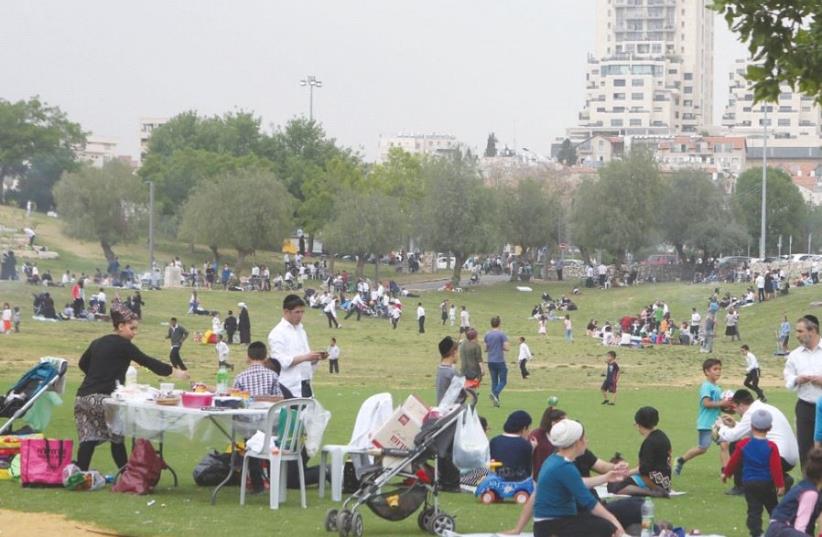 PEOPLE TAKE ADVANTAGE of yesterday’s heat wave with a visit to Jerusalem’s Sacher Park
(photo credit: MARC ISRAEL SELLEM/THE JERUSALEM POST)
Advertisement
As hundreds of thousands prepare for treks and picnics over the next few Passover intermediate days, wintry weather is threatening to dampen their plans.After heading out in unseasonably hot conditions all day Wednesday, travelers braced for a much cooler Thursday, with the possibility of thunderstorms and flash floods according to Israel Meteorological Service forecasts. Cloudy skies, along with rains, were expected to persist through Saturday at noon in the North and Center of the country.Despite the hot temperatures on Wednesday, as well as the rain that began to fall in the North and the haze that plagued the Center, some 150,000 people visited Israel Nature and Parks Authority nature reserves and national parks, while about 250,000 enjoyed Keren Kayemeth LeIsrael-Jewish National Fund parks and forests, the INPA and KKL-JNF reported.Among the most popular INPA sites were Caesarea National Park, the Ein Gedi Nature Reserve, Yarkon- Tel Afek National Park, Ashkelon National Park and the Einot Tzukim Nature Reserve. Visitors also arrived en masse at the Tel Dan Nature Reserve, the Banyas, the Stalactite Cave Nature Reserve and Ein Prat, as well as the Besor, Eshkol and Masada national parks.Some of the most visited KKLJNF sites in the North were Biriya, Beit Keshet, Ramot Naftali, Gilboa and Swiss forests. In the Center, popular forests included Ben Shemen, Aminadav, Sataf, Horesh and Ilanot, while Britannia and Adullam parks also welcomed many visitors.The most visited KKL-JNF sites in the South were Yatir, Shukda, Hamelahim-Shkarya, Sharsheret and Be’eri forests, as well as Beersheba Park.Although wintry weather is likely in store for Thursday, the Society for the Protection of Nature in Israel is planning to hold its inaugural Israel Trail Day. At sites around the country, SPNI is inviting hikers to join in free events to celebrate the 1,100-kilometer Israel Trail, which stretches from Kibbutz Dan at the country’s northern tip to Eilat in the South.In 2012, the Israel Trail earned a spot on National Geographic’s list of the world’s 20 most “epic trails,” and was praised for delving “into the grand scale of biblical landscapes as well as everyday lives of modern Israelis.”Last year, SPNI teamed up with the Google Maps Street View Trekker project to enable virtual hikers to experience the path in its entirety at their computer screens.In the North, hikers can partake in an event beginning at SPNI’s Beit Ussishkin Museum in Kibbutz Dan, with independent walks as well as stations with informational content. The designated 5-km.path is considered “easy,” requiring about two-and-a-half hours and welcoming visitors from 9 a.m. to 3 p.m.At Ramat Hanadiv Park, in the Carmel region, hikers can walk along a 6-km., “medium”-difficulty route, from 9 a.m. to 3 p.m., from Ein Tzur to Horvat Akav.Slightly further south, the coastal portion of the Israel Trail will be featuring one-hour, 2-km. guided tours along the banks of Nahal Hadera, from 9:30 a.m. to 5 p.m.Two spots hosting activities along the trail in the Center are Ganei Yehoshua Park in Gush Dan and the Latrun Monastery region.The former will provide 2-km., “easy” guided tours along the Yarkon River from 9 a.m. to 3 p.m.The latter offers a 4-km., “easy” route, beginning at the Armored Corps in Latrun and lasting about three hours.In the Negev, hikers can celebrate Israel Trail Day along a 3-km., “medium”-difficulty route that begins at Mitzpe Ramon and weaves through ancient Nabataean ruins, around an expansive canyon and into a desert in full bloom, from 9 a.m. to 3 p.m.At the southernmost tip of the trail, visitors can climb Eilat’s Har Tzfahot, in a 3-km., “medium”- difficulty route that begins at Nahal Shlomo, overlooks the Red Sea and then descends to SPNI’s Eilat Field School. The hike takes three hours and is open to participants from 7 a.m. to 1 p.m.The inclement weather forecasts notwithstanding, a spokesman for SPNI said on Wednesday afternoon that all of the events were still scheduled to take place as planned. If floods hit Mitzpe Ramon, however, the trip planned for that area will take place on an alternate route in the area, the spokesman added.Like SPNI, the INPA and KKL-JNF are also offering a variety of activities over the Passover intermediate days at their nature reserves, parks, camping grounds and forests.Lists of events are available on both the INPA and KKL-JNF websites, with a few plans already canceled or postponed due to the forecast.