Some of the women were visibly frustrated, with many saying that a megaphone has never been used to drown out their service before. 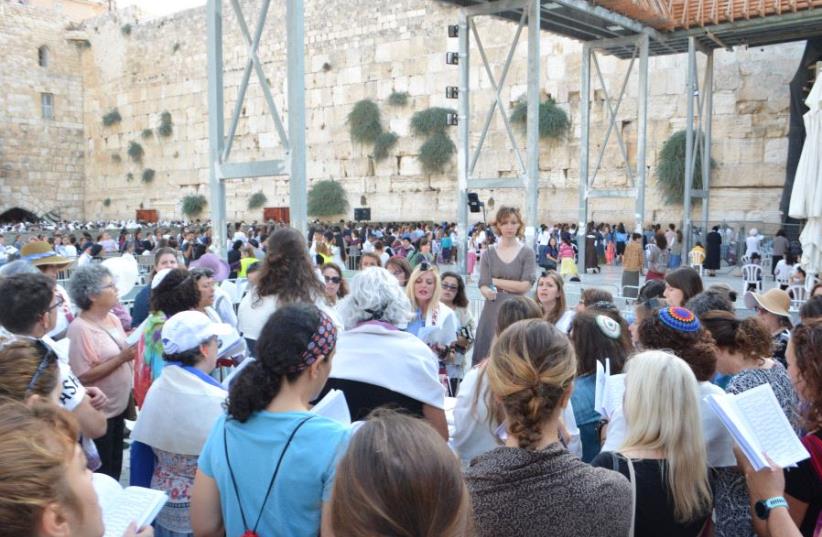 Women of the Wall
(photo credit: KAYLA STEINBERG)
Advertisement
Members of Women of the Wall gathered at the Western Wall in Jerusalem’s Old City yesterday to mark Rosh Hodesh Av, the saddest month of the Hebrew year, with Torah scrolls, tefillin and prayer shawls as Orthodox men and women jeered nearby.Women from around the world attended the 90-minute service, held in a closed off part of the women’s section, while other women lined the outside of the gates and protested against them and their version of prayer. Other onlookers blew whistles and screamed as the women huddled close together, singing around a table with a tiny Torah placed on top of it.Women of the Wall is a prayer group that aspires to allow Jewish women of all denominations to pray freely at the Western Wall. Group prayer takes place at 7 a.m. on the first day of each Hebrew month (Rosh Hodesh), drawing severe criticism from onlookers for a variety of reasons that include anger at the group for wearing prayer shawls and the belief women should not be able to pray out loud at the site.Rosh Hodesh Av, which comes just over a week before the fast day of Tisha Be’Av, brings with it a strange dichotomy – celebrating the new month but also reflecting upon the sad events, including the destruction of the two temples, that Jews remember each year during this period.Many times during Monday’s service, one of the prayer leaders beckoned everybody closer so the protests would not drown out their prayers.At one point, a men’s service began on the opposite side of the barrier separating the genders at the Wall, and the leader used a megaphone.Some of the women were visibly frustrated, with many saying a megaphone had never been used before to drown out their service.However, their service carried on, complete with Shacharit, a Torah reading and Musaf prayers.Toward the end of the service, the women sang a special prayer hoping that their overall prayers would be answered, and that all women would be blessed.They finished by singing “Hatikva” to a crescendo of shouts from bystanders.Following the service, the women hugged each other and walked out carrying their tiny Torah as protesters lined their path out of the Western Wall plaza.