Yom Kippur confessions: The political apologies you wish you could hear

If you overheard Israeli politicians on the high holy day, what would they say? 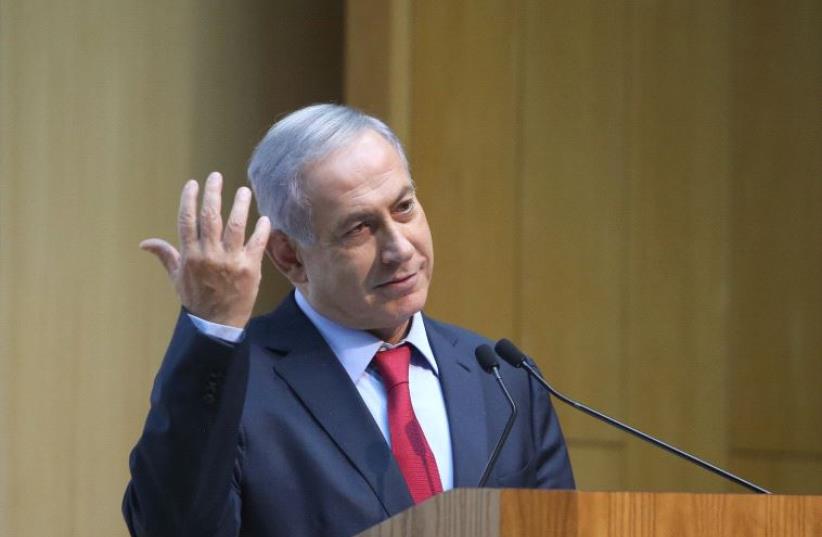 Prime Minister Benjamin Netanyahu
(photo credit: MARC ISRAEL SELLEM/THE JERUSALEM POST)
Advertisement
In Jewish tradition, between Rosh Hashana and Yom Kippur, people are supposed to sincerely apologize to those whom they have harmed over the past year. They are even supposed to ask for forgiveness three times until their apologies are accepted.In politics, apologies are few and far between. Whenever a politician apologizes for anything, it is considered big news because it is such a rare occurrence.Perhaps politicians are more apologetic in their private, personal prayers that they utter silently. This week, two politicians who are not Orthodox spoke openly about praying and speaking with their Creator.Deputy Minister Michael Oren spoke on his Facebook page about his childhood talks with God. Opposition leader Isaac Herzog boasted that he went to synagogue for four hours on Rosh Hashana and said he was surprised to receive messages there about Channel 10 reporting that he was negotiating with Prime Minister Benjamin Netanyahu.Wouldn’t it be nice if we could be a fly on the mahzor (holiday prayer book) of our politicians and hear their personal prayers, especially on Yom Kippur, when they are supposed to be striking their chests with their fists and saying they are sorry? If we overheard our politicians apologizing, what would they be saying? Here are some good examples of what might be uttered in their sincerest Yom Kippur confessions: Prime Minister Benjamin Netanyahu: “I’m sorry I’ve stayed in this job for so long.I was right when I backed limiting prime ministers to two terms 20 years ago. This past year, I broke promises about mixed prayer at the Kotel and paying off Turkish terrorists, picked unnecessary fights here and abroad, played musical chairs in my cabinet, and I might have gone a bit too far against the media. I also was not very nice to Buji [Herzog] and Bogie [Moshe Ya’alon]. I apologize.”Former defense minister Moshe Ya’alon: “Bibi offered me the Foreign Ministry. I turned it down because I was angry at him, and it was a big mistake. I’m now out of work, with no election in sight. This wouldn’t be happening if I hadn’t picked fights over the ‘shooting soldier,’ Elor Azaria, and the controversial general Yair Golan. When I quit the cabinet, I didn’t need to burn bridges in the Likud and on the Right. I apologize.”Opposition leader Isaac Herzog: “I’m sorry I haven’t just admitted that I want to join the government and stopped playing games. I would make a great foreign minister, but my party doesn’t want me to take the job. I should either stand up to them, be a leader, and join, or say firmly once and for all that the marriage with Netanyahu will never take place. Well, at least not this term anyway. I apologize.”Yesh Atid leader Yair Lapid: “I’m sorry for pretending to be someone I’m not, even though it is totally working and getting me plenty of votes. I’m not so rightwing. I’m more secularist than I’m letting on. And I’m not shadow foreign minister, even though I’m acting like one. I apologize for everything except telling people not to read Haaretz. I don’t regret that at all.”Defense Minister Avigdor Liberman: “When I was in the opposition, I promised that if I became defense minister, Hamas leader Ismail Haniyeh would be dead within 48 hours. It has now been more than 48 days, rockets are flying from Gaza again, we haven’t invaded, and Haniyeh is still alive. Sixteen people connected to my party have been indicted, and though I haven’t been this time, it’s my fault, and I apologize.”Joint List head Ayman Odeh: “I was supposed to be the moderate Israeli-Arab leader people were waiting for. But like that thing in the entrance to Jerusalem, I haven’t looked anything like a bridge. I refused to join any government, even if it was led by the Left. I’ve defended outrageous moves by members of my faction. Now we all ditched Shimon Peres’s funeral. Even Abu Mazen [Mahmoud Abbas] went to that! I apologize.”Education Minister Naftali Bennett: “I, too, was supposed to be a bridge. But my decision to fund haredi (ultra-Orthodox) schools even if they fail to teach the core subjects of math and English will harm the economy, prevent them from working, and is a bridge to nowhere for them. I apologize.”Finance Minister Moshe Kahlon: “I admit expectations for me were set way too high, and there was no way I could possibly deliver. After I lowered cellphone service rates from way too much to almost nothing, people thought I would be able to do that with all products in Israel, including housing in Jerusalem and Tel Aviv. It hasn’t happened, and it’s not going to happen. I apologize.”Health Minister Ya’acov Litzman: “I was doing such a good job reaching out to the secular that I was the cabinet’s most popular minister. Then I shut down the trains across the country because of work done on Shabbat. I then threatened to do it every week, even though that would lead to more Shabbat desecration. Ssshhh! Don’t tell my rabbi, but they’re working on the train this Shabbat again. I apologize.”Culture and Sport Minister Miri Regev: “I’ve gone way too far in spreading my ideology. It’s a democracy, and other people have a right to an opinion that’s not my own, even if they run a theater or join the new Israel Broadcasting Corporation. But the worst thing I did this past year was make Israelis think that ‘Kat ze bullsheet’ is English. I’m told it’s not. I apologize.”Former prime minister Ehud Barak: “Why am I talking so much? It clearly doesn’t make people like me or miss me at all. If I run for prime minister, I’d lose to Elor Azaria, Rachel Azaria, Rachel the Poetess, and probably Oren Hazan. I complain about Netanyahu a lot, but I broke up the Labor Party to stay his defense minister, so I’m the last person who could criticize him. I apologize.”