The Duke of Cambridge visited the Western Wall, the Temple Mount and the Church of the Holy Sepulcher during the final leg of his tour.

Prince William tours religious sites in Jerusalem's old City
(photo credit: TALI GILBERG/MARC ISRAEL SELLEM/KENSINGTON PALACE)
Advertisement
On his last day in the city of gold, Prince William let his feet do the talking.He smiled, kneeled, prayed, lit candles, bowed his head in the three holiest sites in Jerusalem’s Old City – the Temple Mount, the Western Wall and the Church of the Holy Sepulchre.But he issued no public statement, beyond a smile and a nod.At the Western Wall, he donned a skullcap, placed his hand on the wall and a note in its crevices.Then he left a blessing in the Western Heritage Foundation guestbook: “May the God of peace bless this region and all the world with peace.”The tall prince, the first royal to make an official visit to Israel and the first ever visit to the Palestinian territories, was easy to spot in his light tan suit and slightly balding head.His choice to tread on two of the most sensitive sites in the Israeli-Palestinian conflict – the Western Wall and the Temple Mount, also known as the al-Haram al-Sharif – was strictly embargoed until just before his arrival.Journalists who had been forewarned tried to mob him, but startled tourists, including a British bar mitzva boy who was in the middle of reading the Torah, had not realized they were sharing the sites with royalty.At the church, sitting on the stairs wearing necklace with a cross, Annie Kara from California squealed as she heard of his arrival.“I am super excited the prince is visiting the Old City and is about to come through these steps,” Kara said.“We’re pleased and surprised,” said Terry Charalambous from Australia just before the Duke of Cambridge passed.

Annie Kara from California waits to catch a lumps of Prince William pic.twitter.com/NsCpk1xhIt

Terry Charalambous of Australia was surprised but excited to learn Prince William is about to pass by pic.twitter.com/Qig23fVG3C

The prince began his morning at a viewpoint of the Mount of Olives, before heading to the Church of Mary Magdalene and to its Garden of Gethsemane, where his great-grandmother Princess Alice is buried. Prince William laid a wreath of flowers at her grave, which is covered in a white cloth, and lit a candle.A devout Christian, she died in London in 1969 and had asked to be buried in Jerusalem.It was the end of a three-day trip, that included visits with Prime Minister Benjamin Netanyahu, Israeli President Reuven Rivlin and Palestinian Authority President Mahmoud Abbas. 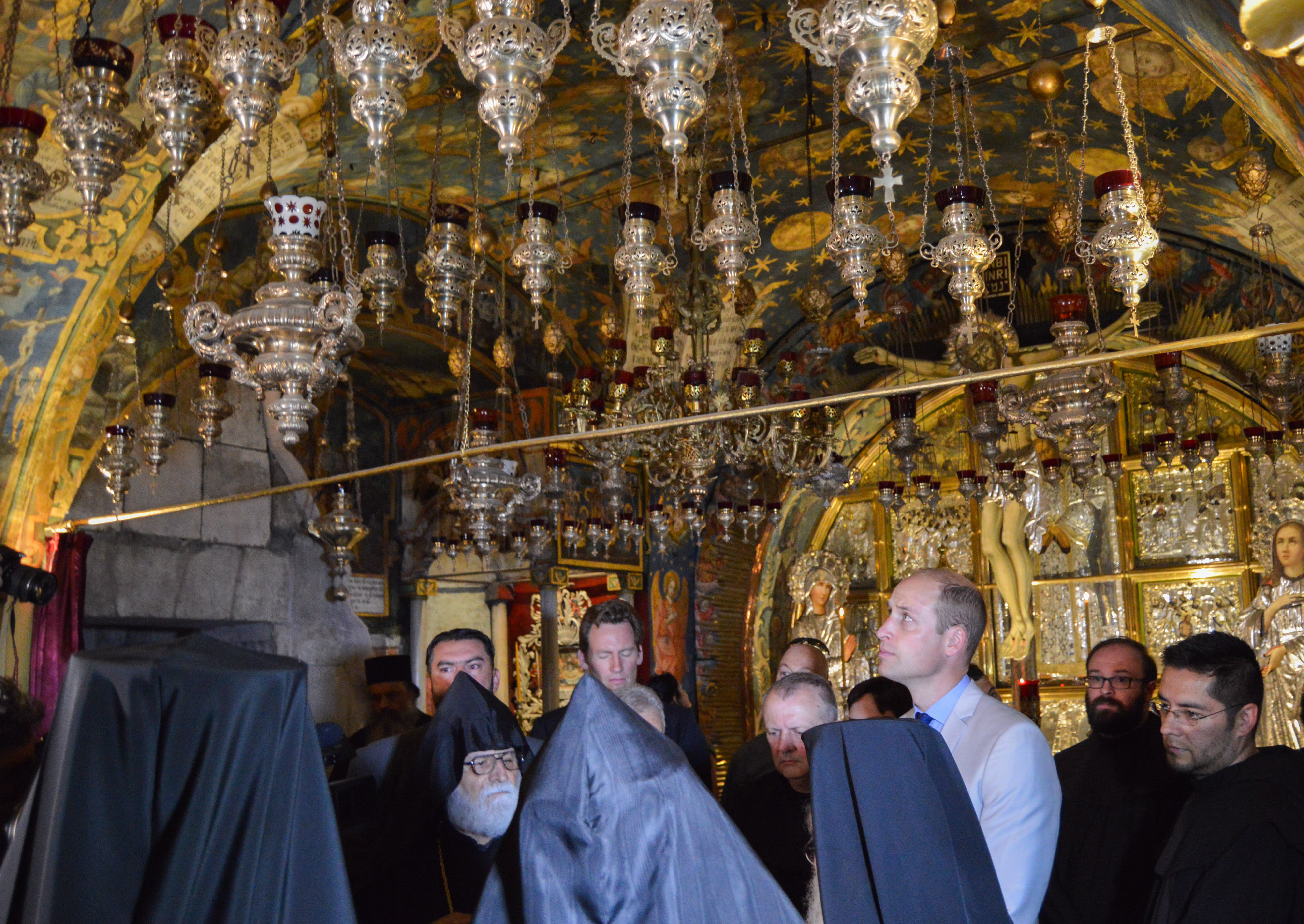 Prince William tours the Church of the Holy Sepulcher in Jerusalem's old CityHe hit the Tel Aviv beach front and met with Eurovision star Netta Barzilai, although no chicken dance ensued. He stopped at a soccer game with Jewish and Arab children.Near Ramallah, he visited the Jelazoun refugee camp. He also watched a Palestinian dance troupe and listened to a young man sing a song “Ya Watani” – “Oh My Homeland” – made popular by the Lebanese singer Fairouz.He tasted traditional local dishes such as falafel, shwarma and knafeh and kicked a football with local boys and girls, receiving soccer shirts bearing the names of his children.His trip, made on Israel’s 70th anniversary, was billed as more of a cultural visit, but was rife with overtones of the conflict, particularly given that from the end of World War II and up to the War of Independence, Great Britain controlled what is now Israel and the Palestinian territories.The careful choreography of the trip, in which the Tel Aviv embassy handled west Jerusalem visits and the Jerusalem consulate dealt with the Old City and east Jerusalem visits, raised eyebrows among Israelis.The British consulate’s statement before the prince’s visit referred to east Jerusalem as occupied Palestine, upsetting many.He also angered Palestinians by refusing to apologize for his country’s role in the Balfour Declaration, which laid the foundation for the modern state of Israel.When speaking at the consulate on Wednesday night, Prince William said: “This region has a complicated and tragic history. In the past century, the people of the Middle East have suffered great sadness and loss. Never has hope and reconciliation been more needed. I know I share a desire with all of you, and with your neighbors, for a just and lasting peace.”And just like that, he was off.“Until we meet again, Prince Charming,” the British Embassy tweeted in Hebrew as William’s plane taxied for departure from Tel Aviv’s Ben-Gurion Airport.Reuters contributed to the report.