One of the two men was named as Inspector Ronen Cohen, while the identity of the second, a prison guard, remains under gag order. 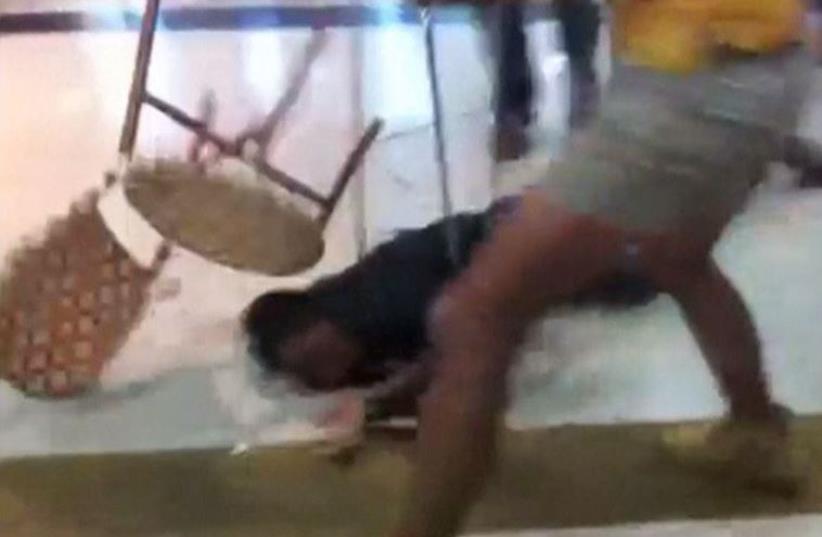 Israeli crowd beat Eritrean migrant mistakenly identified as Palestinian shooter
(photo credit: screenshot)
Advertisement
Four suspects, including an Israel Prisons Service officer and a guard, were placed on conditional release on Thursday for their alleged role in the brutal beating in Beersheba of Eritrean asylum-seeker Haptom Zarhum, whom they suspected of being a terrorist.One of the two IPS employees was named as Insp. Ronen Cohen, while the identity of the prison guard remains under gag order.During Cohen’s hearing, Beersheba Magistrate’s Court Judge Amir Doron leveled harsh criticism at his alleged actions and the attempts by his attorney to downplay them.
Israeli crowd beat Eritrean migrant mistakenly identified as Palestinian shooter
Doron said that, “There is no law in Israel that allows people – even if they wear a uniform - to take the law into their own hands when they have reached the scene of an incident after the attacker is on the ground and incapacitated. There is no law that allows them to then kick the same wounded person lying on the ground, even if they think doing so is fulfilling their duty as security personnel.“At the moment that same individual is lying on the floor in his own blood, and is subdued and no longer able to carry on his criminal actions of any sort that can endanger others, there was no justification or need for the defendant to contribute to the violent actions carried out after that point.”In his closing statement, Doron called on the public not to take the law into their own hands and to act “as a just society.”Cohen’s attorney, Ido Porat, said of his client that “they say he is to blame for the lynching but the only lynching here is the way my client is being lynched in the press.”Porat argued that “this is exactly the type of case where we say it could either be worthy of commendation or condemnation.It’s obvious that at the moment that he was hitting or kicking the victim, at that point he was certain that he was a terrorist.“What would have happened if the same victim – my heart is with him – really had been, God forbid, a real terrorist holding a gun or a bomb at the same time that he was struggling for his life. He could pull the gun and fire it at people, what would we say then about the defendant? Wouldn’t he in that case have been a hero of Israel? I would like this case to be seen in the right proportion.”In the end, all four suspects were released on NIS 10,000 bond and ordered not to contact any other defendants for the next 30 days.The Negev police announced on Wednesday night that they had arrested four suspects for the mob attack on Haptom Zarhum, 29, who died on Sunday night after he was shot by a security guard and beaten by several civilians who thought he was a terrorist. As he laid bleeding on the floor and not moving, a few civilians kicked him in the head and dropped a metal bench on his head.Also on Wednesday, police announced that an autopsy had determined that Zarhum had died from the gunshots and not the beating.Police said they expect to make further arrests.The shooting and beating of Zerhum happened just after a terrorist named as Muhand al-Uqbi, 21, an Israeli from Hura, shot and killed Golani Brigade soldier Omri Levy, 19, from Sdei Hemed, before snatching his gun and shooting at least 10 other people in the Beersheba Central Bus Station on Sunday night before being killed by security forces.