Estimates for the cost of raising disability payments to equal the minimum wage have ranged from NIS 7 billion to 14 billion. 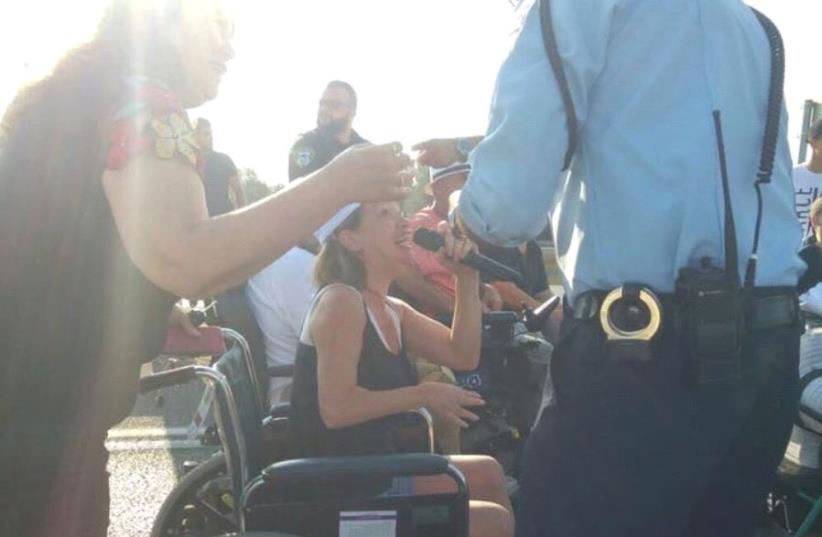 PROTESTERS BLOCK Route 4 near Batzra Junction as a police officer intervenes and commuters drive to work
(photo credit: COURTESY: A HANDICAPPED PERSON IS NOT HALF A PERSON)
Advertisement
Dozens of people with disabilities blocked traffic on two major highways on Sunday in an ongoing campaign to raise disability benefits to the level of minimum wage.Southbound traffic on Route 4 was blocked near Batzra Junction during morning hours as many Israelis commuted to work. Later in the day, protesters blocked Route 1, which links Jerusalem to Tel Aviv.“I don’t want to bother the public, but we don’t have any other way to get them to notice us,” said protester Alex Friedman, chairman of the disability-rights organization “A Handicapped Person is Not Half a Person.”Disability payments are currently NIS 2,342 per month. The protesters are opposing a plan proposed by Prime Minister Benjamin Netanyahu in late June to raise the allotments to NIS 4,000, but only for the severely disabled.It is widely accepted that the payments, which have long remained stagnant, will be increased. However, there is ongoing disagreement over how much to raise the allotments.A committee that Netanyahu appointed headed by Prof. Avi Simchon recommended raising the allotment to some NIS 3200, while activists and some MKs say the stipend should be equal to minimum wage at NIS 5,000.In June, MKs from across the political spectrum advanced a plan to raise the payments to NIS 4,000 for all people who receive disability payments. The increases would take place in two increments starting in January 2018, with increases linked to changes in the minimum wage.Friedman said he supported the MKs’ proposal.Estimates for the cost of raising disability payments to equal the minimum wage have ranged from NIS 7 billion to 14 billion.Sunday’s protests were the latest in a series of ongoing demonstrations. After Netanyahu announced his plan, demonstrators clashed with police outside the prime minister’s Jerusalem residence, and two protesters attempted to set themselves on fire.Protesters have previously blocked highways near Tel Aviv and the entrance to Ben-Gurion Airport.