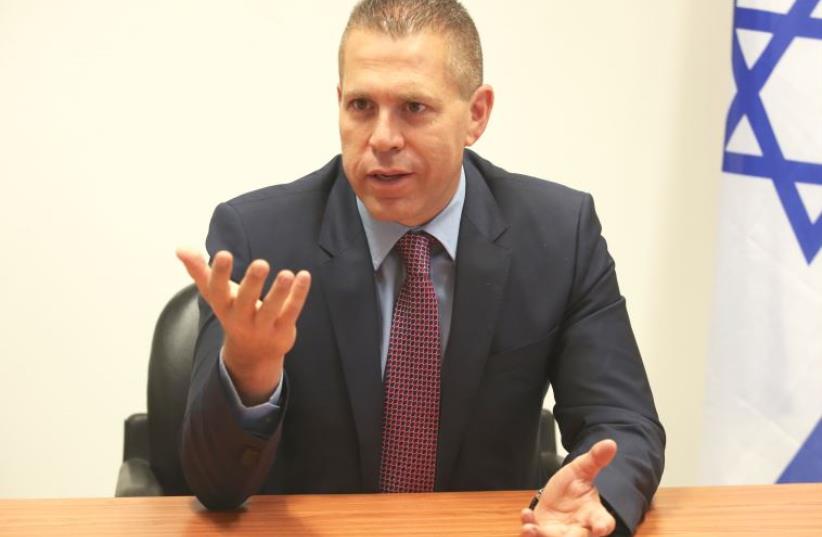 Gilad Erdan
(photo credit: MARC ISRAEL SELLEM)
Advertisement
Public Security Minister Gilad Erdan spoke with President Donald Trump on Monday about a possible Tel Aviv “terror” attack that had already been declared a likely car accident by Israel Police.“You know it’s possible that today it was also a terror attack,” Erdan said while greeting Trump on the tarmac at Ben-Gurion Airport. “We are still investigating a ramming in Tel Aviv. It is very hard to decide; it takes time.”The car collision occurred in central Tel Aviv at around 11:30 a.m., when a 29-year-old driver from Jaffa allegedly hit a cyclist and continued driving, and then hit a motorcyclist and pedestrians, after which he stopped the vehicle. The driver, who did not have a license, was arrested and taken in for questioning by police.Hebrew media first reported the incident as a suspected ramming attack. However, police clarified at approximately 11:45 a.m. – before Trump landed in Israel – that the incident was being treated as a car accident.“I did not tell the president that the ramming in Tel Aviv was terror, but that it is still being investigated, and that sometimes it is difficult to discern what the background is,” Erdan said on his official Twitter account.Standing Together, a coalition of left-wing Arab and Jewish activists and organizations, said Erdan was “again inciting, and again lying brazenly.”Erdan, the Likud party’s No. 2 politician, has previously come under criticism for calling a Beduin schoolteacher a terrorist after the teacher’s car hit and killed a police officer in January. There is an ongoing Justice Ministry investigation, which, according to Hebrew media reports, has found no evidence that the incident in the Beduin village of Umm al-Hiran was a ramming attack.