"I was saved by hanging on to a giant falafel." 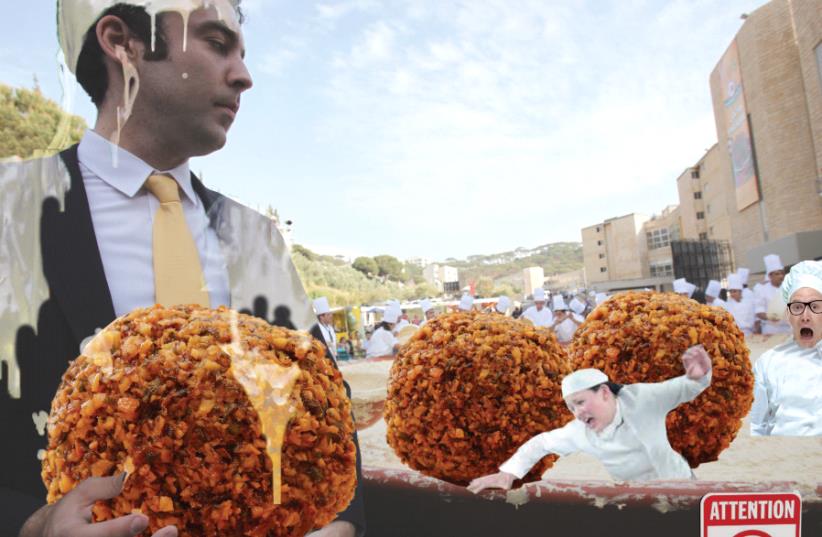 MCGUNNES WORLD Record auditor Fergus Angus looks on in horror as the hummus tragedy unfolds.
(photo credit: Courtesy)
Advertisement
Tragedy struck yesterday during an attempt to make the world’s largest bowl of hummus. Seeking to exceed Lebanon’s 2010 record of 10,432.625 kilos of chickpea mixture, Israeli entrepreneur Moshe Cohen-Levy has been churning up the famous pasty Israeli dish for the last two weeks at a soccer pitch near Holon.“Everything was going well. We had 30+ workers churning up the chickpeas day and night and then ladling them into a giant bowl.”Things began to go wrong, however, when they started to add the massive falafel balls.Unfortunately, there were no standardized vehicles or drivers trained to transport 22.679-kilo falafel balls.“The balls were not well secured,” recalls survivor Anat Mizrahi-Ashkenazi. At around 2 p.m. yesterday the workers began to feel a tremor as the giant falafel balls cascaded into one another on a truck.“We didn’t have any warning. Apparently no one knew you are supposed secure giant balls when transporting them.”The balls rolled off the Toyota Hilux truck, striking 10 men who were standing around the giant bowl of hummus, unaware of the danger.“One minute I was stirring with a huge spoon and then we were all flying into the hummus,” recalls Mizrahi-Ashkenazi.The largest men sank into the quicksand-like edible mulch.Cohen-Levy, who rushed to scene when he heard shouting, found a horror-movie scenario in front of him. Men and women volunteers were slowly being sucked into the chickpea mixture.“I tried to save them by throwing them a giant pita that we had on hand. But I couldn’t hold it; it weighed almost 90.718 kilos.”Unfortunately, it now seems that Moshe’s attempt to help actually led to even greater misfortune as the giant pita submerged several of the people and they were crushed under its weight.“Luckily I was able to hold on to one of the falafel balls and miraculously survived,” recalls Anat, who is recovering at Meilinson Hospital.The McGunnes World Record auditor who was on hand to certify whether the giant bowl of hummus was the largest ever determined that although it was not the largest bowl of hummus ever (falling short of the record by 207 grams) it will hold a different record as being the largest number of people killed in a hummus-related accident.“The last time we encountered a disaster of this nature was in southern Jordan in 1964 when several men slipped on hummus and fell into a vat of tehina.”Lebanon disputes the fact that Israel now holds a world record in anything hummus-related. Mahmud Abubakr, the hummus minister, says, “We will surely find such a large accident in our history as well.”