Rabbi Druckman: Evacuation due to ‘leftist minority’ influence on courts

‘The land is ours and will always be ours, we will build it’ 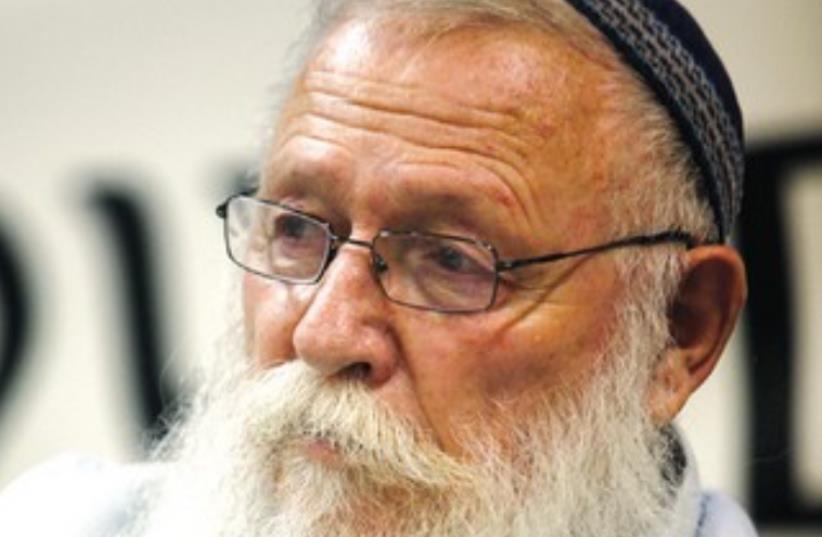 Haim Druckman
(photo credit: MARC ISRAEL SELLEM/THE JERUSALEM POST)
Advertisement
Rabbi Haim Druckman, perhaps the most influential rabbi in the national-religious community, strongly denounced the evacuation of the Amona outpost on Wednesday, and accused “the leftist minority” of advancing its political agenda through the courts.Druckman visited the outpost on Wednesday while the settlement was being evacuated, to express solidarity with the residents.The rabbi said that the hundreds of youths who had arrived at the settlement should not engage in violence or actively struggle with the police, but said that passive resistance was justified.Druckman, along with several other senior national-religious rabbis, have called on the general public over the last few weeks to go to Amona to protest against the evacuation.Speaking to The Jerusalem Post on Wednesday before his visit, Druckman called the High Court of Justice ruling to evacuate the outpost “an injustice” and unnecessary, arguing that if the land did belong to private Palestinian owners then they could be compensated monetarily without destroying the settlement.“This settlement has been here for 20 years, if someone claimed the land on which the Azrieli Towers stand in Tel Aviv would they say, ‘knock down those towers?’” the rabbi argued.Druckman accused Yesh Din, the human rights group which filed the petition to the High Court on behalf of the Palestinian landowners, of having sought out the landowners in order to advance “a leftist political agenda that there be no Jews in Judea and Samaria.”The rabbi added that he did not believe the Palestinian landowners would be given access to their land even after Amona is evacuated, arguing that it was therefore unnecessary to destroy the settlement.“This land is ours and will always be ours, we will build it and be built up in it.”Yesh Din rejected the allegations that it had actively sought out Palestinians to petition the High Court, with a spokesman telling the Post that the petitioners approached the organization after it was involved in previous legal challenges to the Amona settlement.The spokesman added that the organization would be demanding full access to the land for the Palestinian landowners which he said they had enjoyed until 1995 when the outpost was first established.He further insisted that the land had been registered as belonging to the landowners in question in the Jordanian land registry which Israel accepted and integrated into its own land registry after the West Bank was conquered in 1967.Rabbi Shlomo Aviner, another of the senior national religious rabbis who has strongly opposed the evacuation of Amona, rejected the claim that the land belonged to the Palestinian claimants, saying that such land had been illegitimately distributed by the king of Jordan after the 1948-49 War of Independence.“The Land of Israel belongs to the Jews. Did King David, or Judah the Maccabi give them this land? It was stolen by the Romans, and by the nations after them, and the British established Jordan which eventually distributed these lands in a long chain of thievery,” the rabbi told the Post.