Following public outrage over video, housing company removes it from its Facebook page. 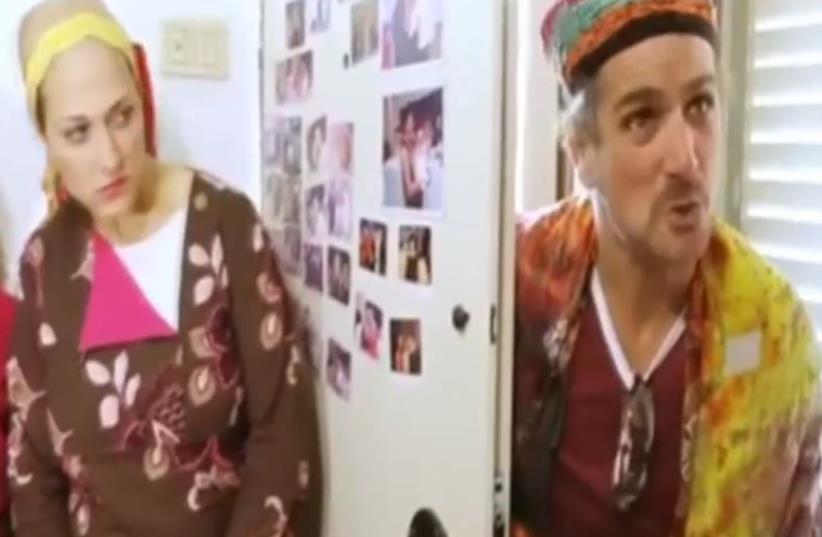 Screenshot of Bemuna housing company video
(photo credit: screenshot)
Advertisement
The real estate company Bemuna, which caters to the national-religious community, caused a backlash on Monday when it released a promotional video for a new housing project in the Karmei Gat neighborhood of Kiryat Gat intended for Israelis of Ashkenazi descent, while ridiculing Mizrahim.The video shows an Ashkenazi family lighting Hanukka candles and singing songs, when a knock on the door spreads fear across their faces.The door abruptly opens and an exaggerated stereotypical Mizrahi Jew enters asking to borrow sugar. He then sees the Hanukka celebration and yells out the door to a friend, and the two invite themselves in to the chagrin of the Ashkenazi family – who reminisce what it would be like to light candles with other Ashkenazim.A narrator cuts in and reads: “Do you also dream of your own home? Would you like neighbors who are to your liking?” And then introduces the national-religious housing project in Karmei Gat.Following public outrage over the video, Bemuna removed it from its Facebook page and wrote: “Bemuna asks to deeply apologize for the hurtful video that we uploaded this morning.Bemuna has always served the public and the offensive message conveyed in the video is not our way and goes against our values. Our company’s management removed the video immediately and began a process of introspection and investigation in order to examine how the video was approved. We will continue to build neighborhoods for the religious public in Karmei Gat and in other places for the entire public.”According to Bemuna’s website, the Kiryat Gat housing project is the country’s largest since the establishment of Modi’in in 1985. It is located some 35 minutes from Tel Aviv and is set to include some 7,500 housing units.The project is being built in collaboration with the government, which according to the Bemuna website, will provide all the infrastructure, including schools, public buildings, parks and roads by the time residents receive the keys to their new homes.MK Dov Henin, head of the Knesset Housing Lobby, penned a letter to Housing Minister Yoav Galant (Kulanu) on Monday and called on him to intervene immediately and clarify that the government will not allow housing discrimination.“The video presents a stereotypical, racist view lacking basic respect for the secular Mizrahi family compared to the religious Ashkenazi family, presented as the ideal Jewish family.This advertisement is disturbing and outrageous, especially considering the decades of discrimination in housing among different groups in Israel, between religious and secular, between Ashkenazim and Mizrahim, and between Jews and Arabs,” he wrote.“A government that closes its eyes in front of such advertising practices enables the exclusion of entire sectors from the right to housing and is a government collaborating with racial discrimination,” he added.Henin also criticized the government for investing significant funds in a project that “excludes Mizrahim and secular [Jews].”