The number has more than doubled in three years. 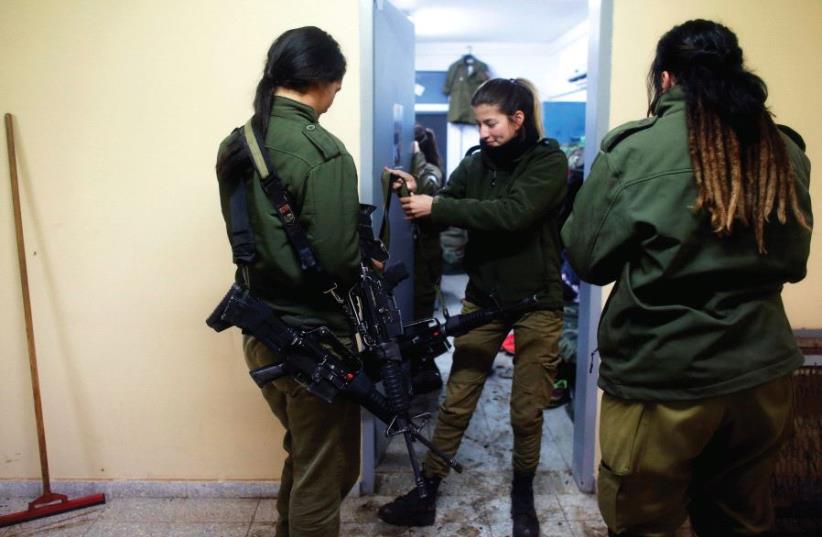 Female soldiers in an IDF artillery unit distribute weapons to their unit.
(photo credit: REUTERS)
Advertisement
A record number of women joined combat units in the IDF this summer as controversy over the treatment of female soldiers by religious soldiers continues.According to military figures, a total of 1,050 women joined combat units over the past year, more than doubling the number from only three years ago, when there were some 500 female combat soldiers.The record number comes as the IDF continues to open roles in the military to women and as motivation for them to join combat units continues to increase.In 1949, Israel’s army became the first in the world to introduce man- datory military service for both men and women but the record number of women serving in combat roles also comes as controversy over women serving in the IDF continues to be a point of contention with the religious community.On Thursday, the head of the IDF’s Manpower Directorate Maj.-Gen. Moti Almoz met with representatives of the Israel Women’s Network after dozens of female soldiers claimed to have been discriminated against by religious soldiers.In recent months several rabbis have criticized women serving in the IDF, including Safed Rabbi Shmuel Eliyahu who called for the dismissal of IDF Chief of Staff Lt.-Gen. Gadi Eisenkot, warning that there was a “war brewing” over the issue.Last week, the IDF warned com - manders to implement IDF policy of protecting the rights of female soldier as reports of their being excluded for religious reasons has increased in recent months.Citing cases where female soldiers were banned from wearing white shirts or prohibiting from wearing bathing suits in pool areas, Almoz stated that orders must be followed to the letter by commanders.“Such strict [practices] are in violation of army orders and policy, do unnecessary harm to wide-ranging groups serving [in the army] and are inconsistent with the IDF commanders’ responsibility,” he said.The military has also recently updated its Joint Service order which regulates interaction between troops of the opposite sex, defining appropriate attire while on base and enforc- ing mandatory separate sleeping quarters.The military has several mixed-gender border defense battalions. In June, four female soldiers made history when they become the first female tank commanders after a 16-month-long pilot training program.The four women – including a new immigrant from England – will be deployed to the Egyptian border with Division 80.“We understand the potential in the operational value of both the Border Defense Forces and the Armored Corps,” said Chief Armored Officer Brig.-Gen. Guy Hasson, stressing that “there is potential here for girls who really want to work for the defense of the state.”This week, IAF Commander Maj.- Gen. Amikam Norkin appointed the first female squadron commander, promoting Major G. (her full name is withheld due to security reasons) as commander of the 122nd air squadron, the IAF’s intelligence unit based out of the Nevatim Airbase in the south of the country.In January, Norkin appointed the first woman to command an aviation squadron and another woman, Maj. M. was appointed to command the IAF’s operational command and control unit, being promoted to the rank of lieutenant colonel. According to the army statement she will be the first female air-traffic controller to reach that rank.