Netanyahu expressed concern over 'fake conversions’ and said the govt must 'protect the borders of Israel’ when asked about the recent High Court ruling on non-Orthodox conversions. 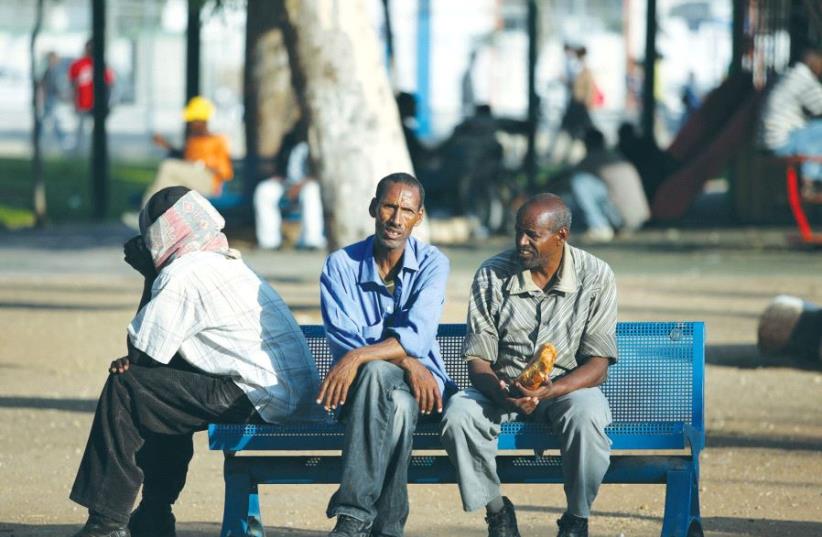 African migrants in Tel Aviv
(photo credit: MARC ISRAEL SELLEM/THE JERUSALEM POST)
Advertisement
Senior leaders of the Reform and Masorti (Conservative) movements in Israel have rejected comments by Prime Minister Benjamin Netanyahu insinuating that their conversions could be used by asylum-seekers and foreign workers to illegitimately obtain Israeli citizenship.
Israel needs to protect itself from “fake conversions,” Netanyahu told The Jerusalem Post on Tuesday. He likened the issue to the influx of asylum-seekers from Sudan and Eritrea more than a decade ago.
Asked if he was especially concerned about African asylum-seekers and migrants converting to obtain citizenship, Netanyahu said: “Not only from there. You could have it from the entire world.” The government has to “protect the borders of Israel so that we’re not overrun,” he said.
Last week, the High Court of Justice ruled that non-Israeli nationals who convert with the Reform and Masorti movements in Israel must be afforded Israeli citizenship under the Law of Return, a decision that was denounced by the haredi (ultra-Orthodox) parties, the Religious Zionist Party and the Likud.
Both non-Orthodox streams say the only non-Israeli nationals they allow into their conversion programs are those who already have residency visas with a path to citizenship, which asylum-seekers, migrant workers and foreign workers do not have.
The progressive Jewish organizations perform an average of 120 to 140 conversions of non-Israeli nationals each year.
Rabbi Gilad Kariv, a leader of the Reform movement in Israel and the No. 4 candidate on the Labor Party list for the upcoming election, said he was disturbed that Netanyahu has not embraced the High Court’s ruling. It was indicative of his alliance with the haredi parties and his severing of ties with the progressive Jewish denominations, he said.
“Prime Minister Netanyahu knows that the conversion issue does not have any impact on migrant workers or the entrance of asylum-seekers to Israel,” Kariv said.
“Making the connection between both topics is his way of continuing his quiet support for the wave of hate of the haredi parties against the Supreme Court ruling,” he said. “Prime Minister Netanyahu has proven that he has no ability, nor real will, to heal the frictions within the Jewish people, and this task should be left to the next prime minister of Israel, who hopefully will replace Netanyahu very soon with support from the liberal parties in the Knesset.”
In response to Netanyahu’s comments, Rakefet Ginsberg, director of the Masorti Movement (Conservative Judaism in Israel), said her organization would continue to enforce its current conversion policies, a reference to its stance not to convert non-Israeli nationals without residency visas.
“Our movement does not intend to change our conversion policies from those in effect today,” she said. “Just as our conversions have been done with a deep sense of responsibility, so they will continue in the future.”
“We especially expect of the prime minister, who is well acquainted with the integrity of Conservative/Masorti and Reform conversions here in Israel, to support and respect the High Court’s decision and to refrain from attacking and blaming his Jewish brothers in the Diaspora and in Israel,” Ginsberg said.
Israel has to be “very, very careful about tampering with the Law of Return,” Netanyahu told the Post. “We have to protect and prevent fake conversions that could enter the country,” he said.
“A lot of people want to come into the country,” Netanyahu said. “I prevented the overrunning of Israel, which is the only first-world country that you can walk to from Africa,” he added, referring to African asylum-seekers and migrants who arrived in the country, of whom some 30,000 to 35,000 remain.
“I think we can solve the problem of conversion for all streams and all denominations in Judaism,” Netanyahu said. “But we also have to protect the borders of Israel so that we’re not overrun. I think we can find a balance between the two. That’s what I intend to do.”