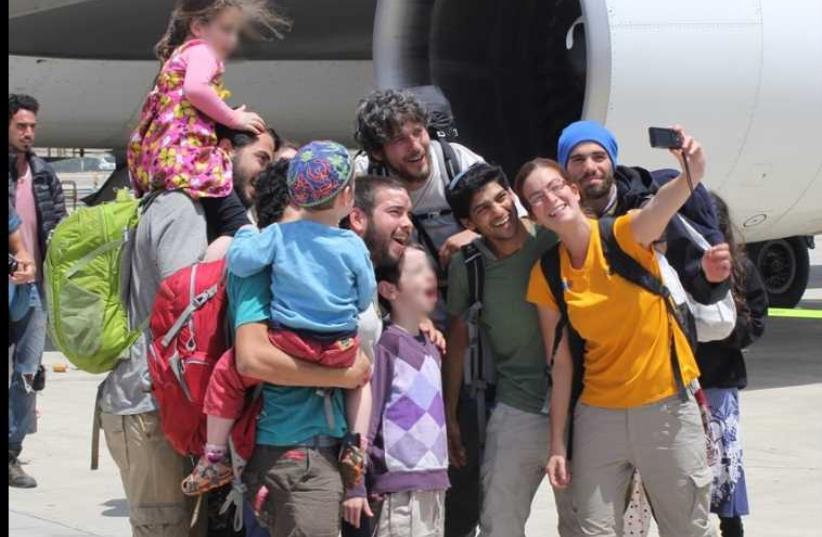 Israelis greet family members upon return from Nepal at Ben-Gurion Airport
(photo credit: BEN HARTMAN)
Advertisement
Amid the celebration and selfies at the arrival gate at Ben-Gurion Airport on Tuesday, Shay Asael was overcome with emotion, his eyes welling with tears as he let it sink in that his son Or had returned from earthquake-struck Nepal in one piece.Or had traveled to Nepal not long after fighting in last summer’s war in the Gaza Strip, during which he lost friends in the line of fire, and flew to Asia to recover, his father said.On Tuesday, after days of following every shred of news at a “war room” he set up at the family’s home, Shay finally embraced his son and let the tears come. 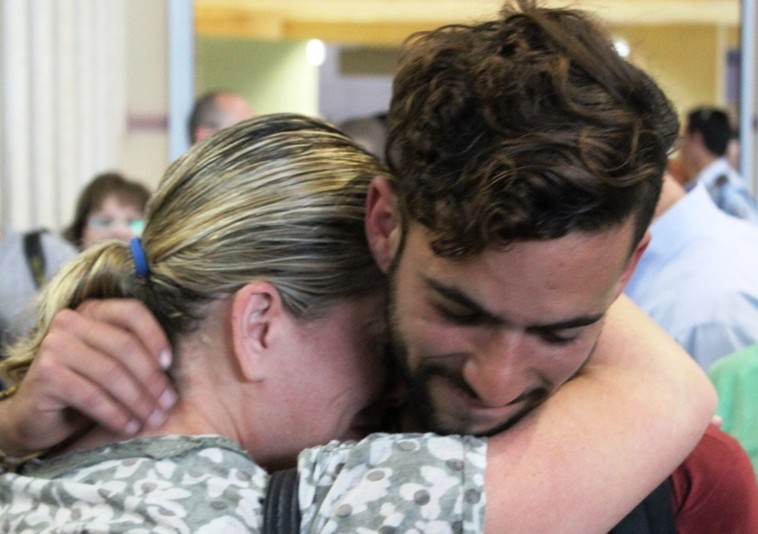 Shay was one of several dozen family members and friends who came to the arrivals gate on Tuesday to greet loved ones who were among the 216 Israelis evacuated come from Nepal after days of fear and uncertainty.Noam Weingarten, 24, from Ginot Shomron, was goofing off with friends who picked him up at the airport, friends whom he had not expected to see for months. Weingarten arrived in Nepal on his post-army service trek just five days before the earthquake hit on Saturday, ready for a long trip before real life begins.Weingarten said he was attending prayers at the Chabad House in Kathmandu when the lights cut out and the floor started shaking. The rabbi told everyone to hurry outside, and they huddled for safety in a courtyard.“You stand there just making sure no buildings are falling on you and you hold on to one another and try not to fall over. Then we were just moving from side to side; I was very afraid,” Weingarten said.The Chabad building and the others surrounding it seemed to be recently built and strong, but just a short walk away there were older buildings that were completely destroyed and pancaked, and he was certain there were bodies under them, he said.Pini, who was in Nepal with his husband, Micky, and their baby Snir, said that while they did not encounter scenes of chaos like those shown on TV, there were real moments of fear in their 5th floor apartment in Kathmandu when the earthquake hit.“We held Snir and hid under the table singing ‘Shir Hama’alot’ and then it stopped shaking and we ran outside,” he said.Amir and Tal were in a 7th floor apartment in Kathmandu with their three kids, including a newborn, when the building began to shake violently. At first, he did not understand what was happening, and then the realization kicked in and he began “shouting to God for help.”When the shaking stopped they ran downstairs barefoot with their kids and the clothes on their back, and then began the scramble to get back to Israel.The celebratory scene on Tuesday resembled the one a day earlier at Sde Dov Airport in Tel Aviv, when a much smaller group of Israelis returned with their children after being evacuated from the earthquake zone. Like on Tuesday, they thanked the State of Israel, El Al and other Israeli companies that helped, and the Israeli public and media for helping the relief effort.One family stood out on Tuesday, though, that of 22-year-old Or Asraf, whose parents, Orit and Patrick, from Lahavim, near Beersheba, stood in the arrivals gate with a sign asking if anyone had seen their son.They stopped Israelis coming through the gate asking them one by one if they had seen Asraf, interrupting the celebrations for a moment to chase down any shred of news about their son.They last heard from Or on Friday, when he told them that he was leaving on Sunday to start a trek in the Langtang region. Since then his satellite phone has been off, and they haven’t been able to get through.Patrick said his son was on his post-army trip, and that he left for Thailand in December after he fought – and was wounded – in Gaza in Operation Protective Edge with the Golani Brigade’s elite Egoz Reconnaissance Unit.On Tuesday evening, Patrick said they had heard a lot from backpackers who had seen Or in the week before the earthquake, but no one had seen or heard from him since then.Looking around the arrivals gate on Tuesday, Orit looked at the celebrating families all around her, and hoped for the best.“This looks like fun for them,” she said, before asking more survivors if they knew anything about her son.