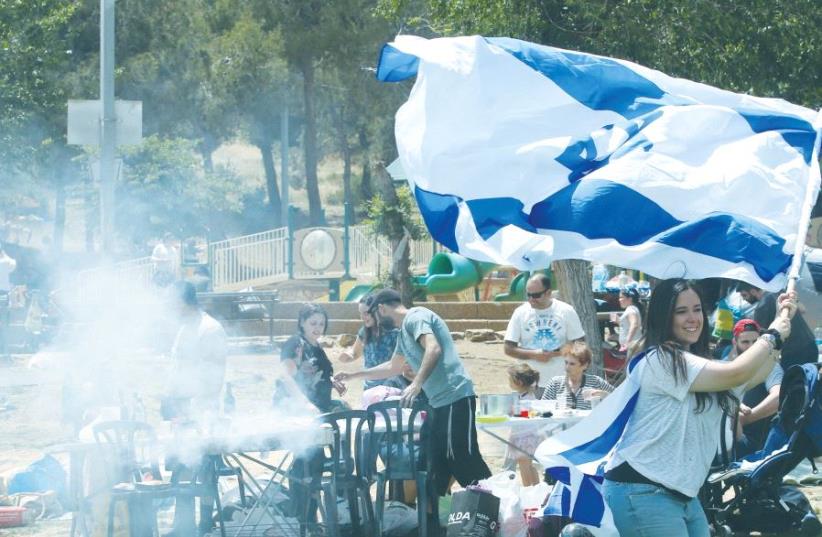 PEOPLE CELEBRATE independence day with flags and barbecue in Jerusalem’s Sacher Park
(photo credit: MARC ISRAEL SELLEM)
Advertisement
People came out in droves across the country on Tuesday to beaches, parks and any patch of open space they could find to mark the country’s 69th Independence Day.Thousands took to the coast’s beaches to watch the cross-country flyover of military jets and helicopters. The annual holiday favorite also saw three of Israel’s newest fighter jets, the F-35 “Adir” stealth planes, considered to be the most advanced plane in the world, partake for the first time.In Jerusalem, President Reuven Rivlin hosted Prime Minister Benjamin Netanyahu, Defense Minister Avigdor Liberman and IDF Chief of Staff Gadi Eisenkot in honoring 121 soldiers who received commendations for excellence.Of the recipients, 71 were men and 50 were women; 11 were lone soldiers; five were soldiers who volunteered for military service; 19 were officers; and 67 were in combat units.Israel launched its Independence Day celebrations with the annual torch-lighting ceremony on Mount Herzl in Jerusalem Monday night with the theme being the liberation and reunification of Jerusalem.Taking advantage of ideal weather conditions and sunshine, some 550,000 people took to the outdoors for hikes, barbecues and time with their families. About 300,000 travelers visited Israel Nature and Parks Authority nature reserves and national parks, while about 250,000 people came to Keren Kayemeth LeIsrael- Jewish National Fund forests and parks, the organizations reported.In particular, people flocked to Ashkelon National Park, Ein Hemed National Park, Mekorot Hayarkon National Park, Eshkol National Park, Palmahim National Park and Nahal Alexander- Beit Yannai National Park, the INPA said. Among the most frequented KKL-JNF sites were the Carmel forests, Haruvit Forest, Hulda Forest, Givat Koah Forest, Rosh Haayin Forest, Shoham Park, Mishmar Ayalon Forest, Ben Shemen Forest and Canada Park, according to forester reports.The celebrations followed a day of grief in which the country honored the 23,544 fallen soldiers and victims of terrorism for Remembrance Day, with hundreds of thousands gathering in military cemeteries across the country. Rivlin, Netanyahu, Eisenkot, Supreme Court Chief Justice Miriam Naor and bereaved families of fallen soldiers and terrorism victims gathered for the official state memorial service at Mount Herzl.Dror, the brother-in-law of Sgt. Yosef Kirma who was killed in a terrorist attack in Jerusalem in October told The Jerusalem Post he had come with his friends to pay respects to a hero.Kirma, a member of the elite police reconnaissance unit Yasam, was killed in a shootout while trying to charge a Palestinian terrorist who had opened fire on Israelis near a light-rail train station in Ammunition Hill killing Levana Malichi. Serving with the Israel Police for four years, he was responsible for foiling a terrorist attack at a kindergarten in Jerusalem the previous December.Wearing a shirt with a picture of Kirma sitting on his motorcycle, Dror said: “This year, holds a new meaning compared to previous years. This year, it’s personal. It hurts so much more.”Liberman paid tribute to the fallen at Tel Aviv’s Kiryat Shaul Military Cemetery saying the loss of soldiers in battle was the price the Jewish people have paid to be “masters of their own fate” in Israel.“Generation after generation we are forced, time after time, to accompany to their rest the best of our sons and daughters, our young and talented, the salt of the earth,” he said, adding, “the passing of time does not dull the pain, but only strengthens the recognition of the magnitude of loss.”Echoing statements by Netanyahu and Rivlin, Liberman said Israel continues to work for the return of soldiers who went missing in action.Deputy Defense Minister Eli Ben-Dahan, who paid tribute to the fallen at the Ramle Military Cemetery, said if it were not for those who fell in battle, the Jewish people would not be an independent people in the State of Israel.“Today, and every day of the year, we must remember the heroism of the fallen. The fallen were not bloodthirsty and were not eager to fight. They placed the common good, the welfare of the people above and beyond their own desires.They sacrificed themselves so that we would live in the State of Israel as a proud people in our land which we returned to after 2,000 years of exile,” he said.