Report finds cases of 'severe' failings regarding donations to IDF 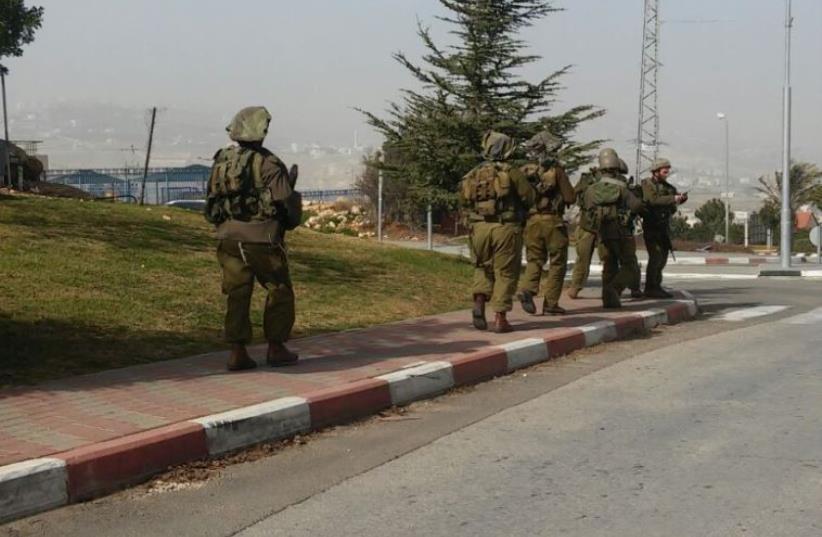 IDF forces conduct search after a Palestinian assailant stabbed an Israeli woman in Tekoa, January 18, 2016
(photo credit: Courtesy)
Advertisement
State Comptroller Joseph Shapira found “severe” failings in some cases in the way the military received funds from donors, a report released Monday revealed.“Donations for the welfare of soldiers have accompanied the IDF since its inception, and express an important connection between communities in the Diaspora and in Israel and IDF soldiers,” the report began. “As a result, these should be based on the principles of efficiency, transparency, proper administration and integrity.”The report criticized what it said was the widespread phenomenon in which soldiers and officers held direct ties with donors and fund-raisers, and took part in fund-raising, including the receipt of combat equipment, contrary to orders, and without IDF supervision.“All of these factors could harm equality among IDF units and soldiers, create inappropriate pressure on parents of soldiers and relatives to donate, and harm the IDF’s good name... as a military that can provide the basic needs of its soldiers,” the state comptroller warned.Additionally, equipment acquired in such unregulated ways “could create security risks. Combat equipment should be supplied by the IDF itself,” Shapira stated.The report called on the IDF deputy chief of staff and chief of staff to examine the issue as soon as possible, to create appropriate countermeasures, and enforce existing orders within all command levels, including punishing those who violate protocol.In the absence of a guiding hand, “the IDF must ensure that organizations that donate to the IDF act in accordance with the military’s plans and priorities,” the report said. It called on the IDF to set up a working plan for all types of donations, tighten supervision of where donations end up, and complete the drafting of orders regarding donations.The IDF Spokesman’s Unit said in response that it welcomed the state comptroller’s report, saying the military is “studying” its conclusions and “will take away the required conclusions.”It added that the military provides its soldiers with the necessary equipment for routine and emergency times, “from the day they are drafted, and throughout their service in units, in accordance with the nature of the varying activities of each unit.”Donations that reach the IDF are used to improve the individual welfare of soldiers, and are not used for the purchase of operational equipment, the military added.In August 2015, the IDF set up a body within the Personnel Directorate that supervises donations. Called the Donations and Welfare Branch, it is responsible for the supervision and planning of all donations, according to the Spokesman’s Unit.The branch is currently in the middle of drawing up documents to regulate donations.It has held military conferences with the Adjutant Corps, all military branches and the various corps to present the new donation guidelines, and to ensure that all are aware that direct ties between IDF personnel and donors are prohibited.Chief of Staff Lt.-Gen. Gadi Eisenkot has repeatedly stated that he “took a severe view of the phenomenon of non-institutionalized donations that exist in the IDF,” and set up mechanisms to counter this, the Spokesman’s Unit said.The IDF has examined all cases cited in the report in which units received donations improperly, and addressed the instances, it added.Meanwhile, the Education Corps has drawn up a plan for the 2016 working year to supervise missions by the corps that are based on authorized donor funding.Donations to the Medical Corps enhance its activities, IDF sources added, but it is not dependent on such funds.