Riding along with the lifesaving night owls of United Hatzalah

From Metulla to Eilat, the volunteers of United Hatzalah work miracles 24 hours a day, seven days a week.

Raphael, Moshe, and Guy - United Hatzalah volunteers
(photo credit: BECKY BROTHMAN)
Advertisement
Emergency services are by nature ready 24/7 and are often required at the most important events of people's lives, including weddings. Yes, weddings. Twenty minutes before my ride-along was supposed to begin, United Hatzalah sent out a press release stating that volunteers came to the aid of a groom in Rishon Lezion who injured himself while breaking the glass during his wedding ceremony. After the volunteers gave first aid to the man, who suffered a deep cut to his foot, the party continued. If this was the start of the evening, I knew I was in for one wild ride.
****
11:15 p.m. - "We had to stop on the way to treat four people at a car accident scene," the message from United Hatzalah volunteer Raphael Poch read as I waited in The Jerusalem Post's Tel Aviv office. "We're always late for life because we stop for emergencies, but we're always first to the scene."Normally women hate to wait around for guys to pick them up for a night out, but I made an exception for the three United Hatzalah volunteers -- Raphael, Moshe, and Guy -- that took me on a crazy six-hour overnight shift all throughout the central district of Israel.12:44 a.m. - To say we had a busy night is an understatement. The moment I got in the fly car -- a normal passenger car transformed into an emergency vehicle, basically the four-wheel version of Clark Kent turning into Superman -- the dispatcher was giving us directions to a crash scene in Holon.
The scene of an accident involving a bicyclist and a van in Holon (credit: Becky Brothman)
In a job where seconds mean the difference between life and death, response time is king. Most cities around the world claim royal status when their emergency services can get to a scene in nine or ten minutes, but country-wide Israel boasts a mind-blowing three-minute response rate.Israel's epic response rate is due in no small measure to United Hatzalah's efforts. The organization has over 3500 volunteer EMTs, paramedics, and doctors who take approximately 800 emergency calls per day. All volunteers go through training programs under the supervision of the Health Ministry. The volunteers represent the diversity of Israel -- in terms of religion, gender, and geography. Volunteers usually work in the areas where they live, and because they're dispersed all over the country, qualified emergency responders are always quick onto a scene.So it was no surprise that by the time we made it from south Tel Aviv to Holon, multiple EMTs were already on the scene. But it didn't take long for our next call. 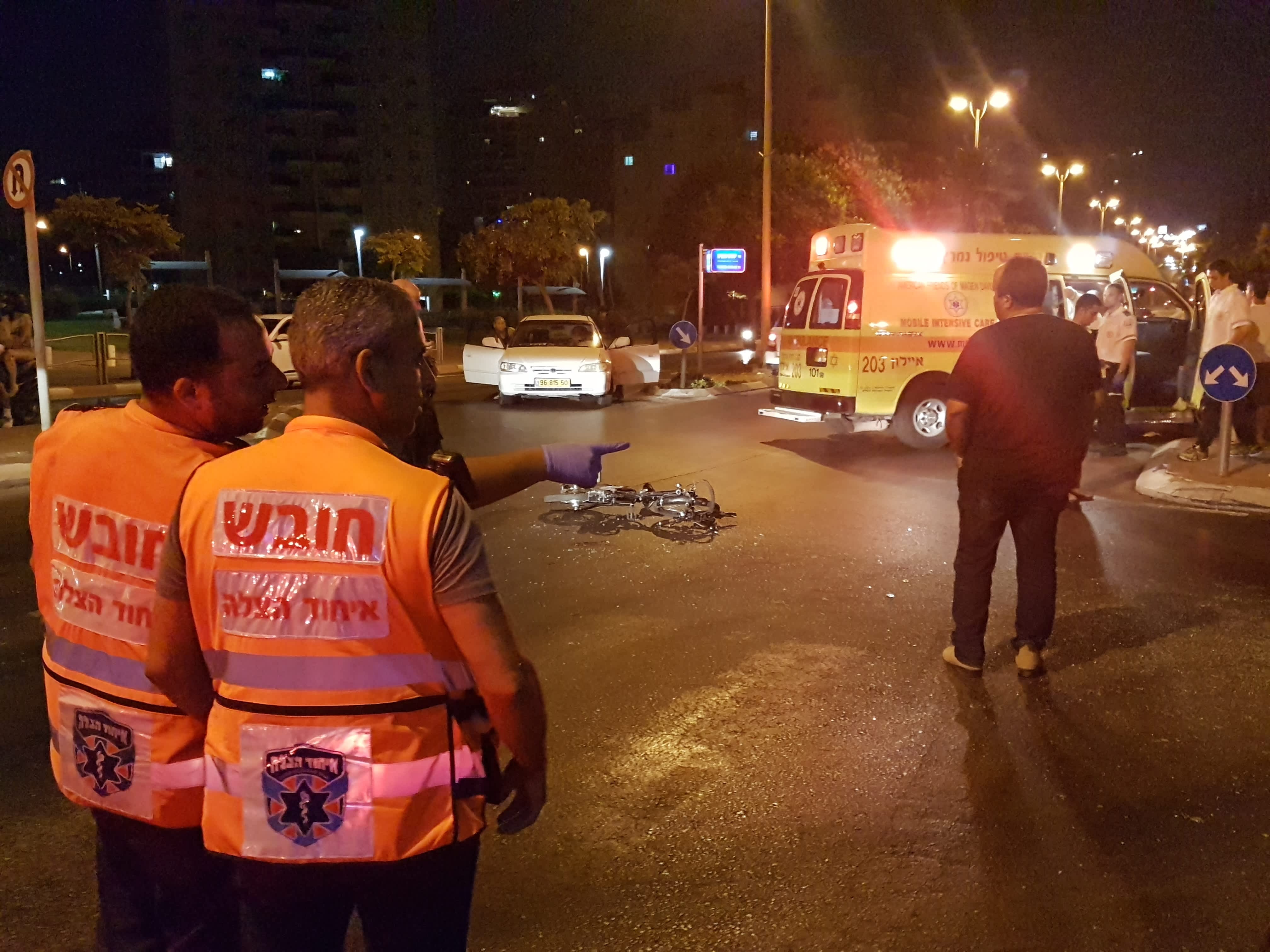 Two United Hatzalah volunteers assess the accident scene (credit: Becky Brothman)
12:55 a.m. - Another call, another Holon auto accident. This time it involved a serious incident between a bicyclist and a van. The bicyclist had flown head-first into the van window and was already being transferred into an ambulance. The intersection was covered in broken glass and a pool of blood collected on the street where the bicyclist fell. Multiple EMT teams and ambulances were already on the scene, but our fly car team was needed to assess if anyone on the van was physically injured. United Hatzalah volunteers are not only trained to look for physical injuries. The psychotrauma & crisis response unit, formed in 2016 and made up of 150 mental health professionals with a year-end goal of 300, deals with situations where bystanders need emotional support -- what United Hatzalah calls "psychological first-aid."1:25 a.m. - We took a short break at a centralized location that opens all night for emergency responders. I learned that my fly car crew had come a long way to volunteer that night. "We're trying to offer extra support for people in the area. Moshe's from Jerusalem, I'm from Efrat, and Guy's from Ramle. What are we doing in Tel Aviv?" Raphael said. "We come here because we know ambulance response time is a little slower and in order to provide an extra level of coverage, we show up specifically here."Raphael pointed out that this is not the norm. "People forget, the way United Hatzalah works, volunteers are going about their daily lives and when an emergency happens, they come. Most people don't have fly cars like this." All heads of departments get a fly car, which is equipped with an emergency siren which allows them to get to scenes even faster.
United Hatzalah fly car (credit: Becky Brothman)
Most UH volunteers use their own cars and bikes, and work with a "jump kit" that includes first-aid and oxygen equipment. Paramedics are equipped with more pharmaceutical supplies. They drop whatever it is they're doing when they get a call and go. One of the guys at the van accident in Holon was in the middle of painting his house when the call came in.1:52 a.m. - Our next call sent us out to a call in Givatayim. A cancer patient had fallen down and his family needed help getting him up. Our team entered the apartment, helped the man up onto a chair, and assessed his vitals and sugar levels. The readings were normal for a person in his condition, so it was determined that he didn't need more emergency care. I was impressed by the level of respect and care that the team gave the man and I was not alone. As we were leaving, his wife tried to give the crew money, but was refused. United Hatzalah is a 100% free service and almost entirely donation-run -- of which 70% comes from abroad, 30% from Israel. This differs from Magen David Adom, which charges people 180 shekels for basic ambulance services.
United Hatzalah volunteers assisting a man in Rishon Lezion (credit: Becky Brothman)
2:35 a.m. - We headed toward Givatayim to handle a 'shortness of breath' call in an apartment. This is one of the most serious calls an EMT can get, because time is of the essence. When we entered the apartment, a woman met us and we followed her into the bedroom where a 96-year-old man lay in a bad condition. Three generations of wedding photos in a cabinet next to the bed were a testament to this man's life and loves, but he himself no longer had the ability to speak and the woman who cared for him was a Russian-speaker with only basic Hebrew. The team quickly got the man oxygen and took his vitals, determining that the man would likely die without urgent care.An ambulance arrived from Magen David Adom ten minutes after we called for additional help -- and luckily one of the paramedics spoke Russian. If the United Hatzalah team hadn't gotten there to prepare the man and give him initial care, he may died before the ambulance came. Time is the line between life and death and seconds count like eternities.Israel is a multi-lingual society and, like the MDA paramedic, a large number of first responders speak Russian, English, and Arabic. Arabic serves both the Arab Israelis and Palestinians, as many have crossed into Israeli territory seeking emergency medical treatment. There has been a huge drive to get Arab volunteers to serve their communities. The most famous recent case was that of United Hatzalah volunteer Nedal Sader, a Muslim medic who was the first to respond to the Temple Mount terror attack in July. 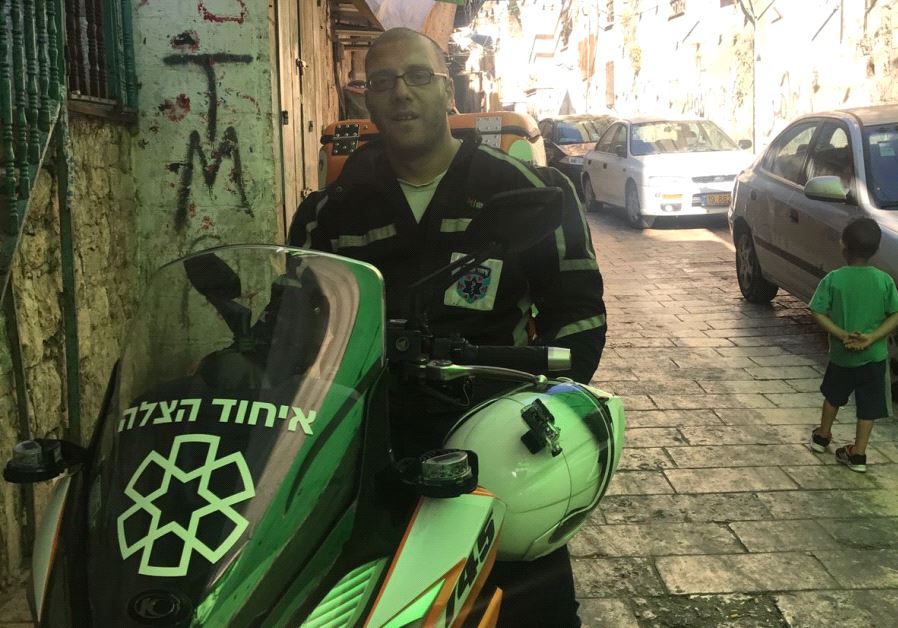 Nedal Sader with his ambucycle in Jerusalem's Old City (credit: Courtesy - United Hatzalah)
United Hatzalah has also dealt with other language barriers. Nechama Loebel, a United Hatzalah volunteer, became Israel's first deaf EMT in 2016. When a deaf woman got in a car accident, Loebel skyped with the woman as EMTs on the scene took care of her.Moshe Mizrahi, one of the fly-car team members, said that he took a call in April involving an 80-year-old woman having a heart attack. Her daughter who was deaf and blind started to panic at the sight of the EMTs trying to revive her mother. Moshe started signing with the woman on her hand and she calmed down.“I think I am one of two EMTs in the organization who knows sign language. One of the most important things for an EMT is to be able to communicate with those in need of medical assistance. We need to know how to talk to them, explain to them what is happening, calm them down, and ask them important questions relating to their medical history or the medical history of their loved ones. We don’t answer calls from a specific group of the population, rather we answer the calls of everyone and that includes members of the blind and deaf communities. We need to know how to help them as best we can. I think it is important for all EMTs to learn sign language so that we can help treat the people of this community as well,” Moshe said.
Police officers and United Hatzalah volunteers respond to the scene of a crime (credit: Becky Brothman)
3:36 a.m. - We drive back into southern Tel Aviv and attend to a man lying on the ground dazed and bleeding profusely from his head. The man, who appeared to be an African refugee, said that was in an illegal club when another man bit his head. The police arrived on scene and took details of the assault, while United Hatzalah tended to the man's injuries. He was transported by ambulance for more treatment.4:09 a.m. - After driving to the scene of a near drowning in Rishon Lezion and finding multiple EMTs already on the scene, we headed to a gas station in the same town and took our last call of the night. A 56-year-old man was slumped over in a chair, semi-conscious. His vitals were tested and the fly-car team talked to his distressed wife. The man received oxygen while we waited for an ambulance to arrive. While we attended to him, a MDA volunteer came along on his bike to assist.
People get treatment after a near drowing in Rishon Lezion (credit: Becky Brothman)
That is the beauty of Israel's emergency response system, pioneered by United Hatzalah. Volunteers dropping everything day and night to save lives together. United Hatzalah is not only saving lives in Israel, but the organization is now committed to bringing their system to many more locations around the world. One of the few non-government officials that Prime Minister Narendra Modi visited during his trip to Israel was Eli Beer, United Hatzalah founder and president. Modi said that he was impressed by the model and wanted to implement a similar system to deal with both India's hard-to-reach and overly-congested areas.As my night with the fly-car team was ending, I couldn't help but agree with Modi: United Hatzalah is incredibly impressive.