Sderot Mayor Alon Davidi: If there's no quiet in the South there shouldn't be quiet in Gaza either.

By YAAKOV LAPPIN, JEREMY SHARON
OCTOBER 5, 2016 10:29
Rocket Sderot
Advertisement
Palestinian terrorists in Gaza fired a rocket at Sderot on Wednesday morning, setting off air raid sirens and narrowly missing homes. The rocket exploded in a road in the southern town, failing to cause physical injuries, but sending one local resident into shock.Police bomb squad members removed the remains of the projectile from the road, and paramedics treated the shock victim.Following the attack, an ISIS-linked Salafi jihadists in Gaza claimed responsibility. An online statement said the attack was part of the set "jihad against Jews," and a response to the arrest by Hamas of five Salafi operatives in recent days.The Israel Air Force struck a number of Hamas terror targets in response on Wednesday, launching air strikes in northern and southern Gaza. An additional Hamas target was hit by IDF tank fire in northern Gaza earlier on Wednesday. 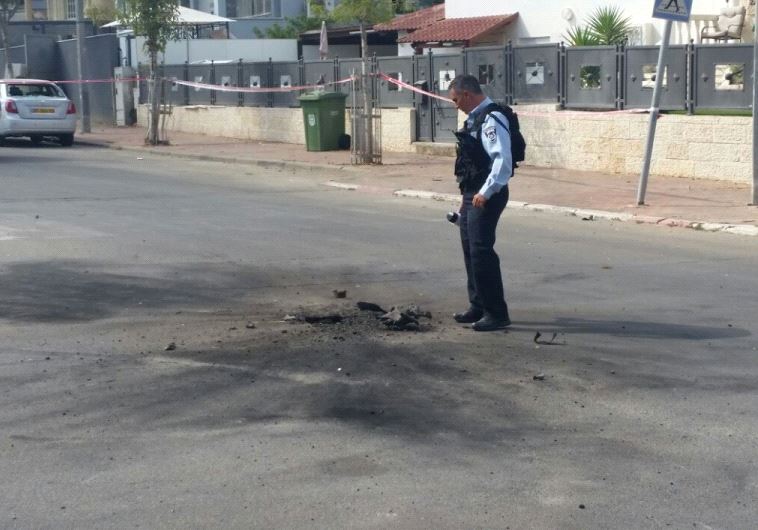 The IDF said the rocket attack on Sderot threatened the security of Israeli citizens and harmed the state of Israel's sovereignty, adding, "Hamas is sovereign in the Gaza Strip, and it bears responsibility for every terror incident carried out from it." Sderot Mayor Alon Davidi said following the attack that “a drizzle” of rockets on Sderot and other Gaza border communities, as experienced in the past, was not acceptable, and insisted that if there was no “quiet” in Sderot and the Israeli south then there should be no quiet in Gaza either.“The word ‘drizzle’ [of rockets] needs to be removed from our lexicon. I trust that the prime minister, the defense minister, the IDF chief of staff, and the Israel Defense Forces will know how to provide an appropriate answer to the defense challenges facing the city,” said Davidi.“We will not allow anyone to destroy the holidays of [the Hebrew month of] Tishrei. If we will not have quiet then they will also not have quiet.”Alon Bar-Chen, a Sderot resident whose home is close to the the site of the rocket strike told Reshet Bet radio station that if the rocket had hit five meters to the left or right it would have hit someone’s home and caused serious injuries.“We heard the Code Red alert, I was with my son at home, so we immediately got into our strong room. After the explosion we went out to see if there what happened and if there were any injuries… there were people in shock, and if it had been five meters to the side of the road it [the rocket] would have penetrated a house and it would have been a different story entirely,” said Bar-Chen.The last rocket attack emanating from the Gaza Strip occurred on August 21. In response to that attack, the IDF launched an air strike and tank shelling against terror targets.Before that, on July 2, a Gazan rocket slammed into a preschool in Sderot on Friday, causing widespread damage but no injuries, as the building was empty. It was the first rocket attack in the area since mid-March. Two local residents were treated for shock.Ran Siv, who heads an association of renovation contractors, told Channel 2 News on at the time that the rocket struck the preschool center's roof and entered the building, causing "near total destruction." He estimated repairs would run at least NIS 500,000.Last March, Chief of Staff Lt.-Gen. Gadi Eisenkot said Islamic State-affiliated Salafi jihadist organizations have been behind all of the rocket and border incidents in the past year and a half.