Visitors will be able to pray in Caesarea's 2,000-year-old synagogue. Joint development initiated to draw 3 million tourists to ancient port city by 2030. 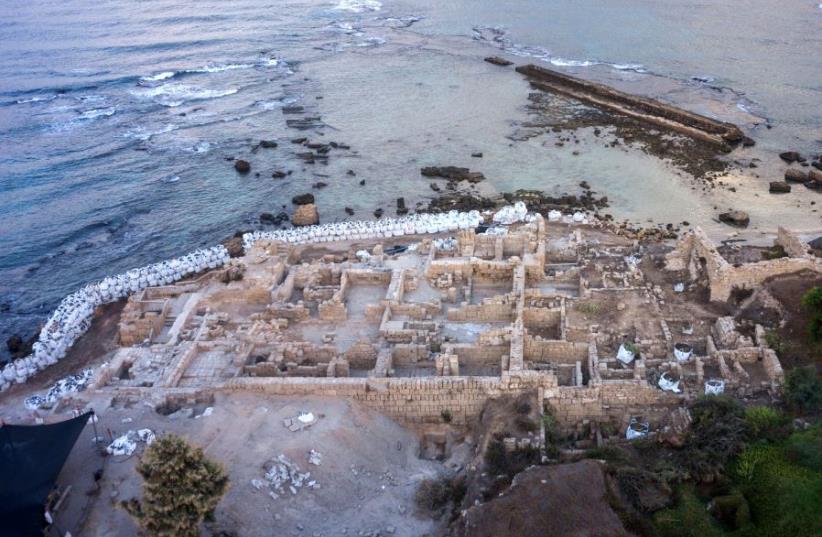 An aerial view of the work in the Caesarea National Park's harbor.
(photo credit: GRIFFIN AERIAL PHOTOGRAPHY)
Advertisement
A joint NIS 100 million venture to develop ancient Caesarea, described by Flavius Josephus in the first century as the “magnificent city built by King Herod” in his book The Wars of the Jews, was announced on Wednesday.Caesarea, a port city established some 2,030 years ago, has been excavated since the ’90s by the Antiquities Authority, revealing many remains that range in date from the time of Herod until the Crusader period.Its strategic importance and architectural wealth made it one of the premier cities during the Roman and Byzantine empires.The far-reaching project, initiated by the Edmond de Rothschild Foundation, Caesarea Development Corporation, Antiquities Authority, and Israel Nature and Parks Authority (INPA), will make accessible numerous buildings of ancient Caesarea and develop the area’s beaches for the public.“The renewal project enhances and upgrades the visitor’s experience in Caesarea National Park as the foremost antiquities site in Israel, together with Jerusalem,” said Michael Karsenti, CEO of the Caesarea Development Corporation.“The project is being implemented as part of realizing the vision of 3 million tourists in Caesarea by the year 2030, and is becoming an important tourist- economic anchor for the residents of the region,” he said.One of the unique features of the project is the support of the general public, including students and ordinary citizens, who can volunteer and take part in the archeological excavations at the various sites throughout Caesarea.The project is being directed by conservator Yoram Sa’ad and architect Ya’ara Shaltiel of the Antiquities Authority’s Conservation Department.Upon completion, the Caesarea Development Corporation and INPA will construct a state-of-the-art visitor’s center.Guy Swersky, vice chairman of the Edmond de Rothschild Foundation, said the initiative closely aligns with the organization’s mission.“Since its establishment, the Edmond de Rothschild Foundation has contributed hundreds of millions of shekels to the advancement of higher education in Israel, and has been at the forefront of innovative initiatives throughout the country,” he said.“The foundation made a strategic decision to invest more than NIS 100m.in uncovering the layers of history, and exposing the fascinating past of ancient Caesarea,” Swersky said. “This enormous project has unprecedented archeological significance, but it is no less important as a catalyst for tourism and economic activity that will benefit the entire region.”Shaul Goldstein, director-general of INPA, noted that Hannah Szenes wrote her famous poem “My God, My God, I pray that these things never end... the prayer of man,” in Caesarea.“Szenes’s poem is a continuation of the prayers that were uttered in the ancient synagogue from the time of the Second Temple, which is identified with Rabbi Akiva, who said: ‘Love your fellow as yourself, which is a great principle of the Torah,’ and who was among the 10 martyrs murdered by the Romans,” said Goldstein.“As part of the project, the synagogue will be partially renovated, and it will be permitted to hold ceremonies there.The launching of this exciting project, particularly during the period of national memorial days, symbolizes the connection to the roots and history of the people and this land.”Antiquities Authority director Israel Hasson said the joint project is intended to “expose, conserve and make use of Caesarea’s secrets for the enjoyment of the general public.”“To date, only about 6% of Caesarea’s treasures have been discovered, and magnificent finds on a global scale are buried beneath its sand dunes,” said Hasson. “This initiative must be a springboard for an ongoing national project to develop the Caesarea site in all its glory.”