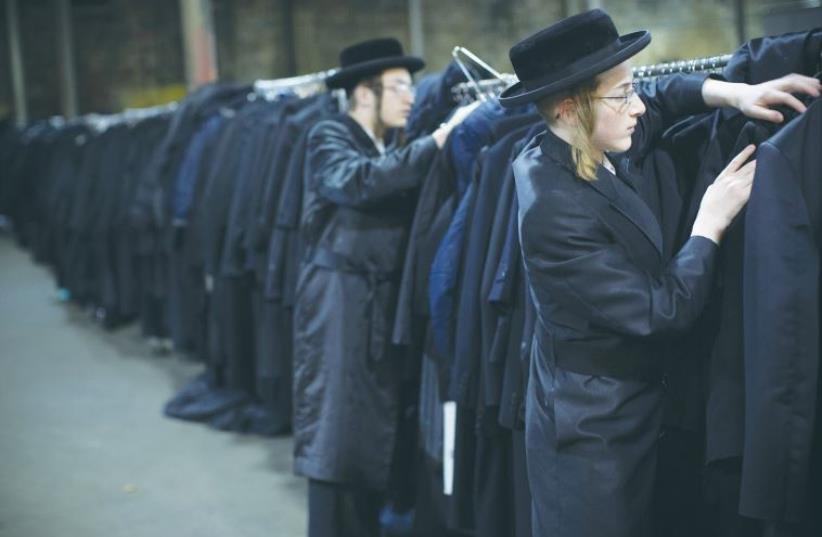 MEN SEARCH the cloak room for their jackets at a mass gathering of Satmar Hassidim in New York
(photo credit: REUTERS)
Advertisement
Yekutiel Yehudah Teitelbaum, the grand rabbi of one of the branches of the Satmar hassidic dynasty, completed a whirlwind two-day trip to Israel on Tuesday with a ceremonial donation to haredi institutions that refuse state funds and also boycott national elections.The Satmar community is the largest hassidic group in the world. Radical and fiercely anti-Zionist, it rejects any association with the State of Israel and dubs its donations to those who eschew any Israeli backing “the Pure Shekel.”Upon arrival in Israel on Monday night, Teitelbaum, head of the Williamsburg branch of the Satmar community, was questioned for half an hour reportedly on suspicion of bringing large sums of money for distribution, then released without further ado.Teitelbaum also donated to institutions that instruct young haredi men to ignore call up notices and avoid enlisting in the IDF.The majority of haredi men in Israel do not serve in the IDF, but most do present themselves at recruiting offices when summoned to receive an exemption.Following reforms implemented in 2014 to draft haredi men into military service that were subsequently repealed, a minority haredi political group urged followers to refuse even preliminary IDF processing.Failing to report to the IDF when summoned renders a person a deserter and liable for arrest.