Science Minster Ofir Akunis said the ministry is spending half-a-billion shekels to ensure that the next generation of Israelis are at the forefront of science and technology innovation. 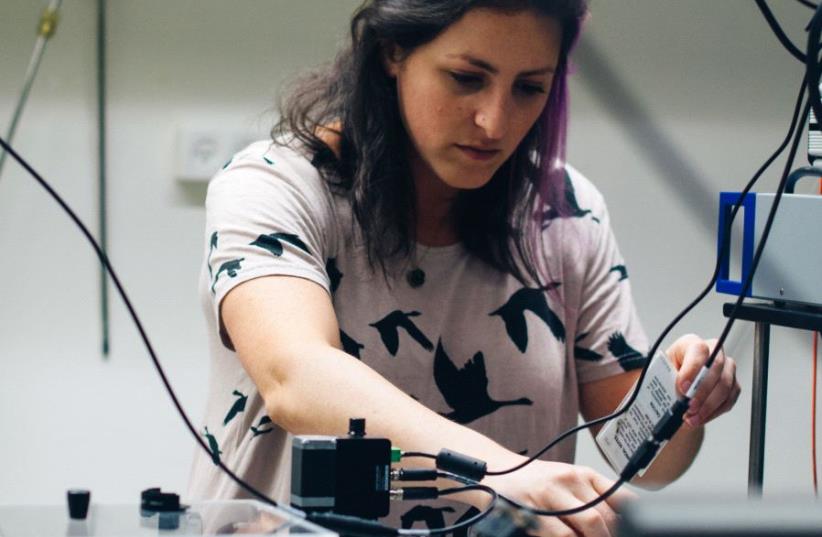 Graduate student Yifat Baruchi in Prof. Ronen Rapaport's lab, testing a photon measurement setup, at the Hebrew University's Quantum Information Science Center
(photo credit: YITZ WOOLF FOR HEBREW UNIVERSITY)
Advertisement
OAKLAND – Science and Technology Minister Ofir Akunis found an incredibly receptive audience at Limmud FSU, an international educational organization for Russian-Jews, in Oakland, California, on November 18.He spoke about Israel being a powerhouse of science, technology and innovation, positing two reasons for this: The first, he accredited to the “brilliant minds through the years,” and then asked the audience to guess the second reason.“Immigration from the former Soviet Union,” a woman offered up.“Exactly,” Akunis said, noting that in the late 1980s and early 1990s 1.2 million Jews from the FSU made aliya. This, he said, was a great boost to the sciences and is reflected today in the success in the hi-tech spheres and in the innovations in math, science and chemistry.“Israel is one big Silicon Valley,” Akunis said, “and I’m very proud that it reflects the positive aspects of the Jewish people and the State of Israel. The truth is we are a powerhouse of innovation and of start-ups.”Akunis has served as the Science and Technology Minister for two years, and prior to that was the deputy minister of environmental protection in the Prime Minister’s Office. His dreams are big and he makes no apologies for them.“Israel must lead the future of humanity,” he said. “We must make the next generation of Israelis – and that includes Jews, Arabs and Druse – part of the world of tomorrow.”As such, Akunis has big plans that he either wishes to implement or has already implemented.He spoke of one of the most important industries of the future, cybersecurity, and how there are currently close to 200 start-ups in Israel solely focused on it. “Per capita, that’s the largest number of [these start-ups] in the world,” he said.The need for cybersecurity is crucial, Akunis said, because the threats against Israel are “not only missiles and bombs and terrorists with knives but also cyber-attacks.” He added that in 2012 Prime Minister Benjamin Netanyahu established a national cybersecurity headquarters in the country.In its efforts to ensure that the next generation of Israelis are at the forefront of science and technology innovation, Akunis spoke of how the ministry is spending its half-a-billion-shekel budget on various initiatives.One of those is the “science basket”, a pilot program that transfers funds to local municipalities and encourages them to invest in programming in the science and technology fields that are most relevant to their constituents.Another project Akunis has implemented is science summer camps for children, which cost the families only 80 shekels per week. “They were a huge success last summer,” Akunis said, “and [this year] we hope to bring in even more students.”He is also focused on ensuring that Israel produces more female scientists and is implementing a science and technology program for girls in high school.Another goal of his is to increase international cooperation between Israel and other countries around the world, touting memorandums of understanding that have been signed with Russia, China, South Korea, Vietnam, the US, the Czech Republic and Australia.Speaking of his visit to Beijing in December 2015, when he met Science Minister Wan Gang, Akunis said: “[Gang] said to me, ‘We want to hear from you how to be a hi-tech nation.’” The importance of cooperation and collaboration with other countries is not only good for research and for the economy, Akunis said. “When we need to decide about issues in the UN, for example, they will see the beautiful face of Israel and not what they think they know about Israel via the media.”He added that with the exception of Iran and North Korea, everyone around the world wants to cooperate with Israel when it comes to science and technology.And that’s a good thing, he said, “because even [in the US] you hear a lot of nonsense about Israel – about democracy, about the stability of the government, and our attitude to our neighbors. Our attitude is very good.We want to talk to them, we want to collaborate with them. We want them to be part of the new world.”