Search intensifies in Nepal for missing trekker Or Asraf

The IDF, together with the Nepalese Army and United Hatzalah, have combed the area for the last two days, based on information they received from trekkers who were in the area at the time. 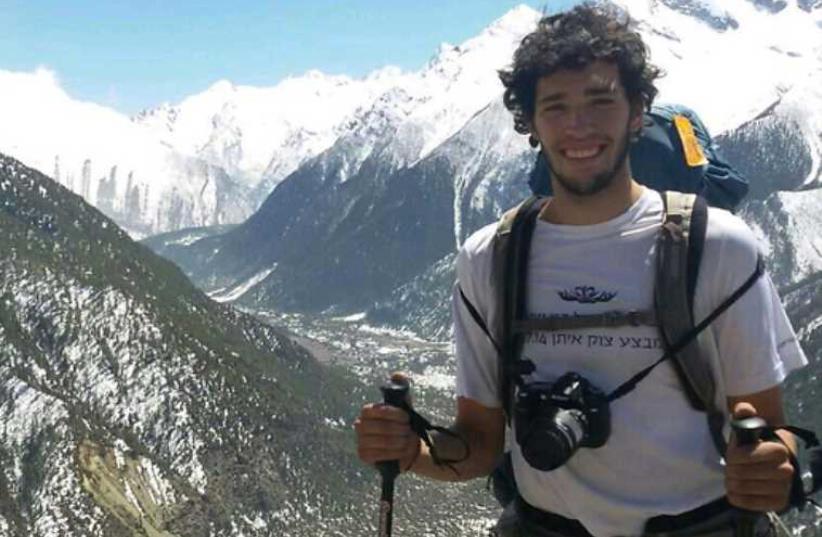 Or Asraf, the missing Israeli hiker, seen here in Nepal
(photo credit: Courtesy)
Advertisement
Israel has intensified its search for missing Israeli trekker Or Asraf, 22, who was last seen in the Langtang area of Nepal, an hour before a massive earthquake struck the Himalayan state a week ago.The IDF, together with the Nepalese Army and United Hatzalah, have combed the area for the last two days, based on information they received from trekkers who were in the area at the time, some of whom saw Asraf prior to the quake.Members of the elite Egoz reconnaissance unit of Asraf’s Golani Brigade and his father, Patrick, are also in Nepal helping with the search.“We are hoping for good news,” Patrick told the Hebrew website Ynet. “I am not leaving here until we find him and bring him home.”All other Israelis who were stranded in remote areas of Nepal have been rescued; in many cases, they could only be reached by helicopter. Israel was able to rent helicopters from India and China, and the Nepalese Army made some helicopters available.Private insurance companies such as Harel and Phoenix, as well as Hatzalah, were involved in the rescue efforts.Immediately after the earthquake, 250 Israelis were unaccounted for in Nepal, but all except for Asraf have since been located. The last of the stranded Israeli trekkers, some 70 in number, were pulled to safety on Thursday and Friday.On Sunday, an airplane with 45 members of the search and rescue teams is to land back in Israel along with 21 Israeli survivors of the quake. Some 217 IDF personnel will remain in Nepal to help the country in its rescue efforts and to offer medical assistance.Israel opened a field hospital in Kathmandu on Wednesday, which has since treated 438 people, performed 33 operations, and delivered 5 babies, three of which were by cesarean section. Israeli medical personnel will remain in the country for a number of weeks to help treat the injured, after which Israel plans to donate the field hospital to Nepal.Israel also has promised Nepal that it will help it to rebuild one of its destroyed villages.Nepal, on Saturday, marked one week since the deadly earthquake devastated the nation with candle-lit vigils praying for peace for the deceased. In the capital, Kathmandu, people gathered in a central boulevard and prayed for the dead before placing the candles in the shape of Nepal’s map.The government said the death toll from the 7.8 magnitude earthquake on April 25 had reached 6,800 and that more than 14,000 people were injured.Fiona, one of those praying for the dead, was fighting back tears as she participated in the vigil.“We are praying for those who passed away in the earthquake and wanted to light the candles to commemorate those who are no more,” she said.Many Nepalis have been sleeping in the open since the quake, with survivors afraid to return to their homes because of powerful aftershocks.Tents had been pitched in Kathmandu’s main sports stadium and on its only golf course.“We are doing here the prayer and lighting [candles] for the memory of the victims who lost their life in the earthquake,” said Vinod Dangi, one of the organizers of the vigil.According to the United Nations, 600,000 houses have been destroyed or damaged. The UN said 8 million of Nepal’s 28 million people were affected, with at least 2 million needing tents, water, food and medicines over the next three months. The worry now is how to prevent the outbreak of disease.Bodies are still being pulled from the debris of ruined buildings, and many of them have been sent to morgues, which are operating at full capacity. Relatives of Nepalis missing are calling for better organization at morgues.Crowds of anxious family members gathered outside a morgue at Maharajgunj Hospital, waiting to identify their loved ones.“There is so much money coming from foreign countries, so much of aid is coming in – have they given all that money to keep dead bodies like this? If you can’t even keep a record of the dead bodies then why are you sitting here? They must keep a proper record of all the dead bodies that are brought here,” said Dev Bhakta Maharjan, a resident looking for his missing family members.Krishna Chand, a local police inspector, said there are too many bodies to handle.“We don’t have the capacity to manage so many dead bodies at the same time. It is difficult for us to deal with so many dead bodies.We are trying to shift the earlier ones to somehow manage the ones that have just come in,” said Chand.The morgue’s record keeper, Hari Sharan Poudel said, while the situation is bad, it has been improving.“If I compare today’s situation with that of yesterday or a couple of days ago – then things are slightly better. The main problem is a lack of lack of identification and verification of the dead bodies,” he said.Unclaimed bodies were being quickly cremated because of the need to prevent the outbreak of disease and to reduce the stench of corpses in areas where buildings had collapsed with th occupants still inside.Yaakov Lapin contributed to this report.