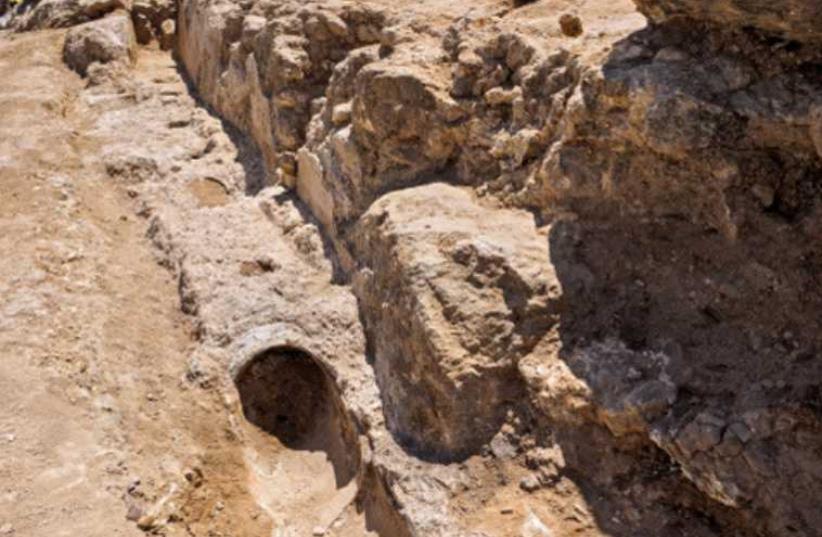 A SECTION of the recently exposed ancient lower aqueduct near Har Homa in east Jerusalem.
(photo credit: Israel Antiquities Authority)
Advertisement
A section of ancient Jerusalem’s lower aqueduct, which conveyed water throughout the city more than 2,000 years ago, was recently exposed during an excavation in Jerusalem, the Antiquities Authority announced.The discovery was made near Har Homa during the construction of a sewerage line in the neighborhood by the city’s Gihon Company, the authority said.According to the excavation’s director, Ya’akov Billig, the lower aqueduct was constructed by Hasmonean kings for mass water distribution in the capital, and operated intermittently until about 100 years ago.“The aqueduct begins at the Ein Eitam spring near Solomon’s Pools south of Bethlehem, and is approximately 21 kilometers long,” Billig said on Thursday.“Despite its length, it flows along a very gentle downward slope, where the water level falls just one meter per kilometer of distance.“At first, the water was conveyed inside an open channel, and about 500 years ago during the Ottoman period a terra cotta pipe was installed inside the channel in order to better protect the water.”Billig noted that the aqueduct’s route was built in open areas in the past, but with the expansion of Jerusalem in the modern era, it now runs through a number of neighborhoods, including Umm Tuba, Sur Baher, East Talpiot and Abu Tor.“Since this is one of Jerusalem’s principal sources of water, the city’s rulers took care to preserve it for some 2,000 years, until it was replaced about a century ago by a modern electrically operated system,” he explained.“Due to its historical and archeological importance, the IAA [Israel Antiquities Authority] is taking steps to prevent any damage to the aqueduct, and is working to expose sections of its remains, study them and make them accessible to the general public.”Billig said the Umm Tuba section of the aqueduct has been documented, studied, and covered up again “for the sake of future generations.”Other sections of the long aqueduct have been conserved for the public and additional projects are planned whose themes include the lower aqueduct, he said.