Security and Defense: A woman's touch

The female instructors who are using Humvees to prepare Armored Corps commanders for war. 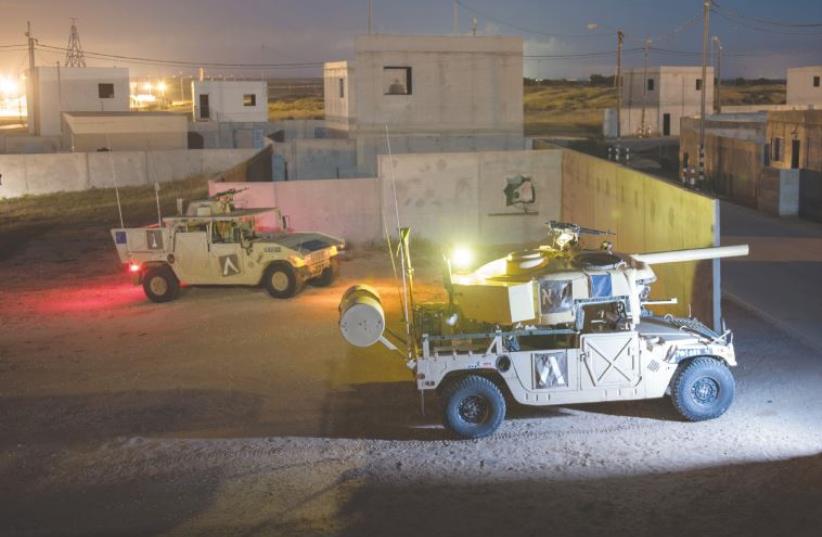 HUMVEES ARE seen during a combat exercise this week. Using the Humvees is much cheaper than using armored fighting vehicles.
(photo credit: IDF SPOKESMAN’S UNIT)
Advertisement
It’s the middle of the night at the Mali Ground Forces training facility in the Negev, and a Humvee vehicle, with fiberglass add-ons to make it look like a tank, just fired a laser into the night sky.The beam strikes another Humvee, whose on-board sensor notifies personnel inside that they have been hit.The attacking Humvee then conducts an evasive maneuver, avoiding return fire from other Humvees, and taking cover behind a sand dune.This unusual sight is a routine nighttime training exercise for the all-female operators of the Humvee Combat Operators Unit, which is tasked with ensuring that Armored Corps commanders will be ready to navigate future war zones in southern Lebanon, Syria or the Gaza Strip.The Humvees contain instructors and Armored Corps commanders who acquire vital battlefield skills.Maj. Tal Koren commands the unit, and told The Jerusalem Post this week about the reasons the IDF chose to set it up some 10 years ago as an alternative training platform.“Since every kilometer traveled by an armored fighting vehicle is costly, many more, cheaper drills can be conducted on board Humvees,” Koren said. When the drills come to an end, the operators, together with the commanders, go over the main decisions they took, looking for where to improve and how to draw lessons – lessons that could prove to be lifesaving in future combat scenarios.Based at Mali’s Tactical Drills Center in Tze’elim, the unit often takes commanders in Humvees into a mock Palestinian village built at the facility which simulates the Gaza Strip.Other combat training runs can occur on the Golan Heights, which resemble northern fighting arenas. Some drills occur deep in the South, for example in the Arava region.“Our Humvees can simulate tanks, armored personnel carriers, or D9 [armored bulldozers],” Koren said.“They visually resemble them and carry similar systems on board that simulate what is in these vehicles. For a tank, we install a laser that simulates that tank’s fire system and a sensor to inform us of when we are hit.The ‘gunner’ can target other vehicles and hit them, and the receiving end will receive visual reports of being hit,” she added.As the IDF makes progress in its command and control systems, the Humvee Combat Operators Unit keeps up, installing its own version of such digital systems on board, to make the training as realistic as possible, the commander said.Merkava MK IV tank commanders must also simulate the deployment of their Trophy active protection system, which protects them against shoulder- fired missiles and armored personnel carriers.“We are assisting commanders, not drivers, in their training. We focus on navigating a variety of terrains, while operating communications equipment and command and control systems in the platform. The idea is to create situations for commanders to enable them to take decisions,” Koren said.Commanders have to decide in what direction to take their vehicles, how to respond to hostile fire, and how to navigate urban warfare and open terrain. They receive professional tips from the female operators sitting next to them, who advise them on which areas to avoid and which routes to take.“These tips are based on the extensive knowledge of the instructors,” Koren said.“We drill entering a [hostile] city, how to provide cover fire, and searching for the best areas to exit the armored fighting vehicles,” she added.The Humvees are actually not tanksized, for safety reasons. “They have to be proportionally sized, to be able to drive on roads. But they are tankshaped, and include a turret.”In the past, the Humvee training unit program was limited to Armored Corps commanders from the reserves. But this week, the unit began, for the first time, to train conscripts – from the 401 Armored Brigade.“This platform is about how to include ruses in combat, and identifying tactical advantages. It enables the commanders to take brave decisions that they will need to utilize on the battlefield. And the best part is the in-depth investigations we hold at the end, which include recordings of the communications and central decision- making junctions,” Koren said.Drill commanders oversee the investigations during the post-drill phase and search for key points that can be utilized in the battlefield.Koren said the all-female unit was once co-ed, but after army inquiries found that women instructors received the best results regarding safety and professionalism, its makeup was switched to its current form.“I command an all-female unit; this is one of the most significant roles for women that exists in the IDF,” she said.“Past military inquiries found that women perform best in such roles,” Koren added.