Sephardi philanthropist worries about students falling between the cracks 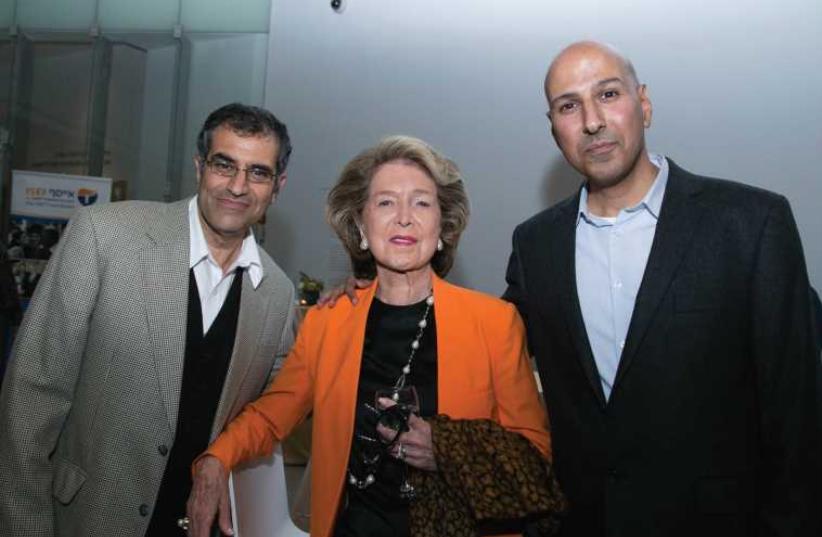 Nina Weiner, co-founder and president of ISEF, poses with ISEF executive director Tomer Samarkandi (right) and chairman of the ISEF executive committee, Prof. Eli Avraham, at a donor event in May
(photo credit: OFER AMRAM)
Advertisement
Nina Weiner, along with the late Edmond Safra and his wife, Lily Safra, founded the International Sephardic Education Foundation (ISEF), a foundation to assist Sephardi Jews in Israel, in 1977. Their work today has expanded to include not just Sephardi Jews, but all Israelis deemed part of the geographical or societal periphery, such as Druse, Ethiopian-Israelis, and Russian-Israelis.ISEF has over 11,000 graduates, including doctors, professors, educators and Knesset members. Sixty percent of ISEF graduates are female and all of them have served in the IDF or in civil service, an important aspect of the scholarship.Weiner, who spoke with The Jerusalem Post on Thursday, tells the story of a girl from Afula who never finished high school but decided to do night courses to complete her matriculation exams. Her math teacher at the night course told her she had talent.“Before that,” said Weiner, “she didn’t even know she was good at math.” The student became an ISEF scholarship recipient and did her post-doctorate at California Institute of Technology.Weiner worries about the rest of the students who don’t get noticed by their teachers – the students who slip through the cracks of a problematic school system that doesn’t invest enough in the periphery. This is what drives Weiner to invest so heavily in the periphery of Israel, to ensure that those cracks are mended.She mentions another student who received 18 years of assistance from ISEF, who currently runs a lab at Tel Aviv University with a grant of €200,000 from the Marie Curie fellowship. This student moved back to live in Rosh Ha’ayin, where she grew up, next to her mother.This is the kind of community connection that Weiner says the program aims to foster – encouraging successful students to give back to the communities they grew up in and be role models of success.Weiner can name dozens of ISEF scholarship recipients and discuss their careers and families offhand. She considers them a community and enjoys staying in touch with them. “Staying in touch with my students keeps me 20 years younger,” she says.She says she learns from her students and is constantly seeking their opinions on issues that arise in Israel. An important aspect of the ISEF program, according to Weiner, is that the students are required to give back to society. Every student who receives assistance from ISEF is obligated to volunteer. Weiner calls it “circles of empowerment” – ISEF impacts individual students, and those students, in return, impact their communities.Weiner, who is the driving force behind ISEF, was born to a Sephardi-Israeli mother, who attended the Herzliya Gymnasium high school alongside influential people such as second prime minister Moshe Sharet.Her father, an Ashkenazi Jew, was a staunch Zionist, even in the anti-Semitic climate in Egypt, where Weiner was born and raised. Her father was taken to a concentration camp for Zionists in Cairo in 1948. Weiner says his camp was more lenient than some of the other camps, especially those in later years, but anti-Semitism in Egypt was on the rise and it was not safe for her family. Her family was able to flee Egypt with their Polish passports, telling the Egyptian authorities they were moving to Poland, while in fact they went to Israel.Weiner says that some would ask whether they were refugees or part of the pioneer movement, there to build the State of Israel. She answers, “we were both.”On the one hand, she says, they fled Egypt with nothing – just three suitcases and a small amount of money. On the other hand, they chose to come to Israel because of their Zionism – they loved Israel and wanted to be there.Of her move to Israel, she says “it was hard for us, but the maabarot were much worse,” referring to the refugee tent cities set up for Sephardi Jews who fled to Israel. Weiner says she saw the difficulties the community faced in these cities, she knew the kids who grew up there, she volunteered with them, and saw the way they were mistreated by the government. This is where her concern for the Mizrahi community started.She later moved to Switzerland to study psychology under Jean Piaget. Her first year with him she says was the hardest of her whole academic career.Weiner moved to the US to study for an MA in psychology, but never stopped reading about the maabarot. She stayed up to date with what was happening in Israel all the time, reading all the different newspapers to get the full picture.In 1977, she joined efforts with Edmond and Lily Safra to assist the kids that she had met in the maabarot, to build up the periphery of Israel.“We wanted to help build the development towns that weren’t being developed,” she said, adding that there were problems with the schools in these neighborhoods and that communities were being neglected.Weiner wanted to identify the most promising students and give them the opportunity to learn so they could become role models for their communities.She proudly boasts that “a student who starts their BA with us, we stay with them all the way throughout their education.” ISEF will assist their students with their academic studies all the way through their post-doctoral studies, including studies abroad, as is the case with numerous ISEF scholarship recipients who have gone on to study at Harvard, Yale, California Institute of Technology, and other prestigious universities around the world.Weiner talks about Israel as a “start-up nation” but warns that the investment is 20 years old and we have to ensure that we continue investing so we continue to innovate. She says ISEF is always looking to the future.She relates that when she started ISEF, some people told her she was “being divisive,” but she knew what she wanted, she had Safra behind her, and, she says of herself, “I am a tank.”