Settlers: ‘Don’t demolish our homes without a solution’

The West Bank hilltop community of Netiv Ha'avot is slated to be demolished by March. 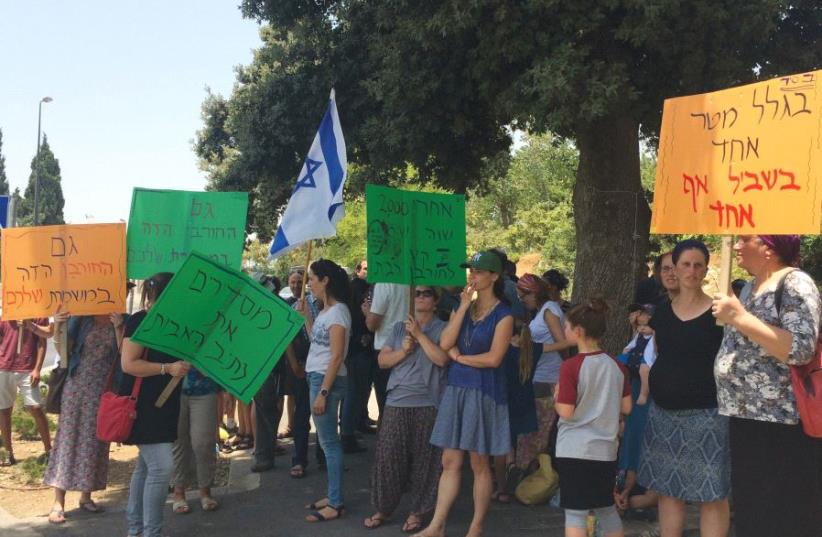 NETIV HA’AVOT residents demonstrate yesterday in front of the Knesset
(photo credit: TOVAH LAZAROFF)
Advertisement
Settlers are demanding that the government offer a solution to the 15 families from the Netiv Ha’avot outpost whose homes are set to be destroyed by March 6.Dozens of settlers held a small demonstration in front of the Knesset on Monday morning as the first step in a campaign to ensure that they will have new homes to move into, before the bulldozers arrive at their small hilltop community of some 40 families in the Gush Etzion region of the West Bank.Next week they plan to open a protest tent by the Knesset.“Say no to the evacuation of Netiv Ha’avot,” one of the protesters shouted through a megaphone at pedestrians heading into the Knesset.“Bibi wake up and start to authorize,” they chanted.Other protesters blew on whistles.A few of the hand scrawled signs said, “This demotion is also on your watch!” As she stood under the shade of a tree, Orit Noy explained that when she moved to Netiv Ha’avot 14 years ago, she had not idea there was a problem.“We worked according to Civil Administration maps,” she said. “We are not the kind of people who build on private Palestinian property.”The mother of six children ages 3 to 14 said she told them that in the end it will be fine, as long as they are together.“But when they ask why will our home be destroyed, I do not know what to tell them because I myself do not understand it,” she said.“The situation is so crazy – one home to my right will be destroyed, one to the left won’t be harmed.”Their small community on the outskirts of Elazar was created in February 2001 with NIS 300,000 from the Ministry of Construction and Housing. Multiple cases have been filed against it by the left-wing organizations Peace Now and Yesh Din on behalf of the nearby Palestinian village of al-Khader, which claims ownership of the land.A 2014 state survey of the property determined that 26 of the structures were on state land, and another 17 homes were on private Palestinian property. In September of 2016, the High Court of Justice ruled that those 17 structures, including 15 homes, must be taken down.Noy is one of six Netiv Ha’avot families who have appealed to the High Court to reconsider the fate of their homes, because they are situated exactly on the line between state and private Palestinian property.They have asked the court to keep the part of the house on state property, but what is needed is a solution now said Noy.“We don’t want to wait until two weeks before the demotion date to know where we are going to live,” she said.The 15 families would like permission to relocate to the portion of Netiv Ha’avot that is located on state property, a move that can not happen until the community is authorized and a master plan is approved.No such approval can be given because Yesh Din has an appeal pending before the Civil Administration against the classification of portions of Netiv Ha’avot as state property.Yesh Din has argued that lots on which eight of the 26 remaining homes were built belong to Palestinians.It has also filed a petition to the High Court against those homes.Beit El Council head Shai Alon joined the protesters to tell them not to be discouraged.“If you do not fight, nothing will happen,” Elon said.He recalled how in 2012 on orders from the High Court, the IDF demolished five apartment buildings – with 30 homes – that had been located on private Palestinian property in the Ulpana outpost just outside Beit El.At the time, Prime Minister Benjamin Netanyahu had promised the 30 Ulpana families that if they walked out of the homes of their own accord, he would authorize 300 new units for the settlement.“We voluntarily left,” he said. “The homes were destroyed. The land has not been used. Five years later, not a single home has been built.”The bureaucratic process is long and protracted, he said, and it is difficult for the government to execute decisions even when it really wants to – “It is hard to go against the High Court of Justice,” he said.The more determined and the more public the battle, Elon told the crowd, the more likely it is that something will happen. “But that could still be a very long time,” he said.