Shas’ statement comes in response to a petition filed in 2016 by Ruth Colian, a haredi activist for women’s political representation within for the haredi community. 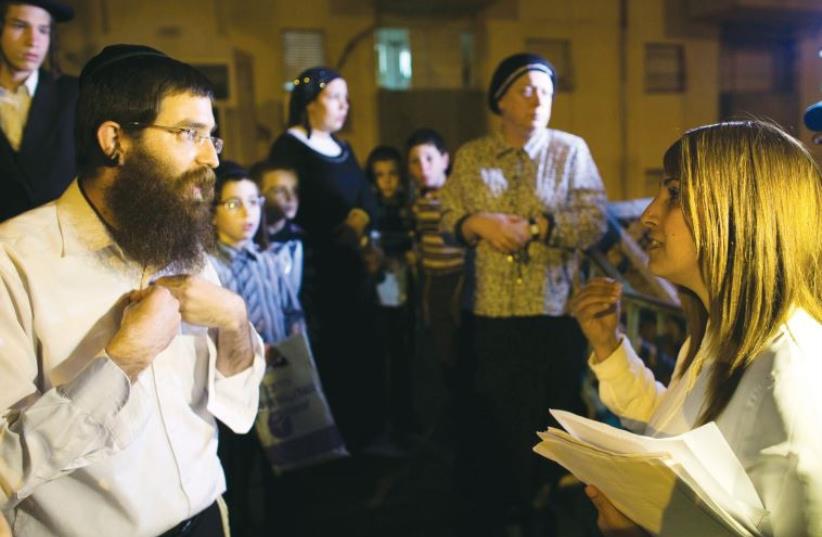 Ruth Colian, head of the first ultra-Orthodox Jewish women’s party Uvizchutan, campaigns in Beit Shemesh in March.
(photo credit: RONEN ZVULUN / REUTERS)
Advertisement
The Shas Party has formally stated to the High Court of Justice that its party regulations do not prohibit women from joining as members, meaning in theory that women could stand as candidates for elected office with the party.Shas’s statement comes in response to a petition filed in 2016 by Ruth Colian, a haredi activist for women’s political representation within the haredi community, through the Rackman Center women’s rights organization.Rackman Center director, Attorney Keren Horowitz, said that although the ruling does not mean in practice that Shas will appoint a female candidate to its electoral lists, municipal or national, its response to the High Court is nevertheless an important declarative step whereby the party has stated formally that women can serve as politicians in the haredi community.Persistent failure by Shas to appoint a female candidate could lead to further legal suits against the party based on its declaration that it does not discriminate against women for party membership.Women have been excluded from representation in haredi parties from their inception due to claims that Jewish law prohibits women’s leadership for various reasons.In recent years, there have been several attempts by haredi activists to be given places on the electoral lists of Shas and United Torah Judaism, so far without success.The petition against Shas noted that the party’s regulations refer to candidates for membership in the party only in the Hebrew masculine form, and also states specifically that women can join the “Women of Shas” body which is separate from Shas but tied to it organizationally.The Rackman Center claimed that these two clauses meant that Shas discriminated against women in its regulations, which is prohibited under Israeli law, and that the High Court should therefore instruct the party to change the regulations.In the High Court’s decision published on Monday, the justices noted that the attorney for Shas stated explicitly in response to the petition that “Shas regulations do not discriminate between a man and a woman,” and that its use of the Hebrew masculine form refers to both men and women, as set out in the 1981 Law for Interpretation which states that general use of the masculine form includes women as well.“This means that the party accepts upon itself the absence of gender discrimination in its regulations,” wrote the Shas attorney.He also emphasized that, unlike a similar petition against Agudat Yisrael which specifically stated that only men can be members, Shas’s regulations never made such a specific discrimination.And he argued that the clause regarding the ability of women to join “Women of Shas” did not exclude them from joining the full Shas party as well.Colian and the Rackman Center stated to the court that they were therefore satisfied that the party does allow women to join as members and that they would therefore withdraw their petition.Horowitz noted that Shas currently does not accept any members, male or female, and that there is therefore no path to membership for women at the moment other than by appointment as a candidate by the party’s political and rabbinic leadership.“We see this as another positive step in which a haredi party took a stance saying ‘we don’t discriminate against women,’” Horowitz told The Jerusalem Post.“A haredi party is saying women can be politicians and represent their communities. It’s a first step, and hopefully in the near future, Shas will appoint women as part of its candidate list.”