"Passerby stop and stare and we invite them to join us," said co-founder Yitzchok Meir Malek. "We want everyone to feel welcome and enjoy the day of rest." 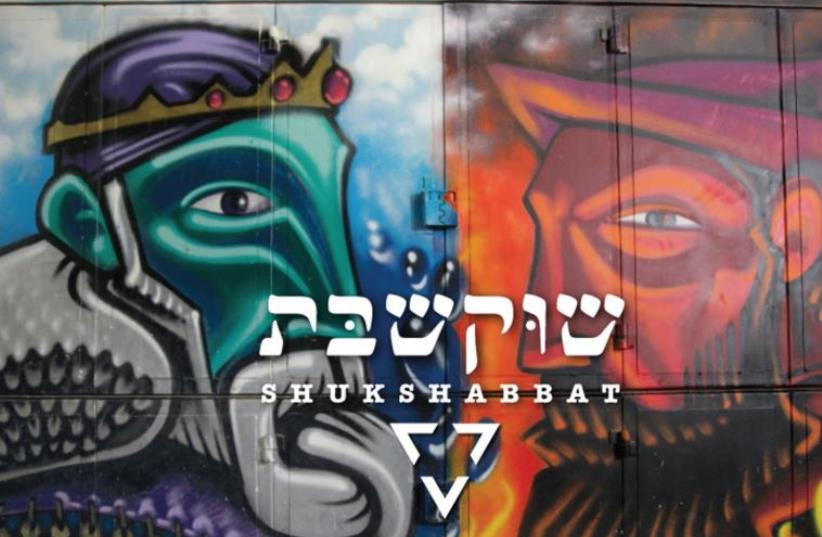 Shukshabbat, Art by Solomon Souza
(photo credit: ART BY SOLOMON SOUZA)
Advertisement
Makeshift Shabbat tables will line a small section of Jerusalem's light rail train tracks for the annual "ShukShabbat" this Saturday afternoon, a project aimed to bring together diverse groups. For the past six years, the event has taken place on the Shabbat before Purim, turning the usually busy Jaffa road, next to the historic Mahane Yehuda marketplace, known colloquially as the shuk, into an urban picnic.
Organizer Yitzchok Meir Malek spoke to The Jerusalem Post about the event. "We seek to unite people from both sides of the tracks, so to speak," he said, noting that one side of Jaffa leads to the more strictly religious Mea Shearim neighborhood while the other leads to Nachlaot, a more gentrified neighborhood with a mix of religious and secular residents. "Its a great pleasure to see people who don't normally eat together -- religious and secular, Jews and non-Jews. Israelis and tourists, Ashkenazic and Sephardic,  As Queen Esther says in the Megillah, 'Go, gather together all the Jews,'" Malek explained.
Volunteers use cardboard boxes and table cloths to create a long table in the middle of the street. Because the light rail does not run on Saturday until after sundown, the lunchtime Shabbat meal continues uninhibited until dusk, when the volunteers clean up, making sure to leave the area as they found it. In the past, the meal has been held under the closed section of the shuk in the event of bad weather.
"Passerby stop and stare and we invite them to join us, " Malek told The Post. "We want everyone to feel welcome and enjoy the day of rest."
Malek, a singer-songwriter based in Jerusalem, claims no credit for the idea that started six years ago, but said it was formulated in his living-room. "It was a just a group of friends -- the chevre -- the idea came from all of us." Born in the United States, Malek made aliyah at the age of 17, eventually founding the Jewish Unity Project, which was credited as official sponsor in the past. Recently, he has been focusing on his music career, releasing the album Dear God under his stage-name YM in 2018 that charted on the US Billboard music charts.
As far as backlash, Malek says only once when they started advertising the event as "ShukShabbat" did the meal generate a negative reaction. "A group of religious Jews mistakenly thought it would be a desecration of the Sabbath, "Malek explained. The thought of secular Jews turning the marketplace, usually quiet and empty on Saturday, into a party with music blasting and businesses open as usual, led to a major protest being planned. "But it turned out for the best," he said. "The mayor's office contacted me and I explained that 'ShukShabbat' did not mean we were looking to publicly break Shabbat." A follow-up article was published in a local religious newspaper and the protest was cancelled."But a small group didn't get the memo," Malek said. When the tiny handful of protesters showed up, they were offered food and drink rather than finding confrontation.
"If individuals want to use their phone on Shabbat we won't stop them, but we want to spread the light of the day of rest," Malek noted. "Maybe one day our table will get so long, it will reach all the way to the Old City, where eventually there will be a House of Prayer for All Nations," he said, quoting the famous passage in Isaiah.
The ShukShabbat will take place at the corner of Jaffa and Mahane Yehuda on March 16 at approximately 12:30.