NGO threatens to petition High Court over accord. 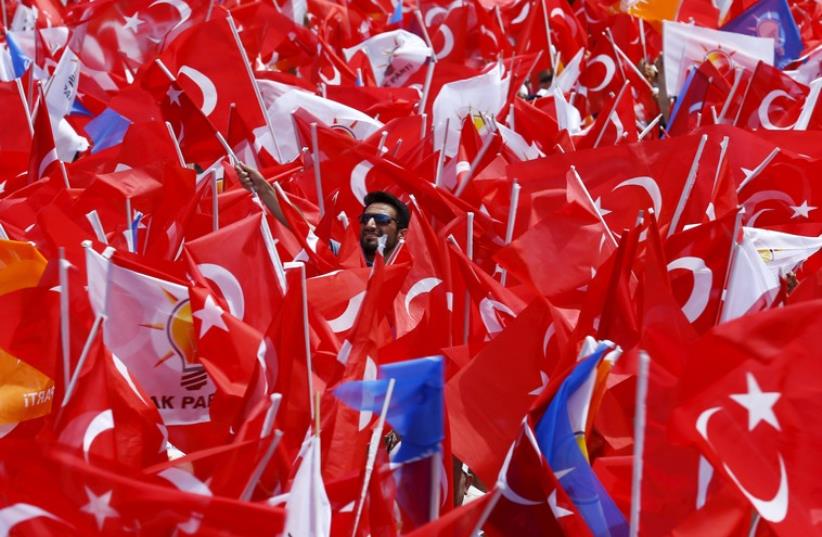 Supporters of the ruling AK Party wave Turkish national and party flags at an election rally for Turkey's June 7 parliamentary election, in Antalya, Turkey, June 6, 2015
(photo credit: REUTERS)
Advertisement
If the government does not get Hamas expelled from Turkey as part of the impending deal, Shurat Hadin will try to block it by going to the High Court of Justice, it threatened on Monday.The NGO sent a threatening letter to Prime Minister Benjamin Netanyahu and the cabinet as part of a last-ditch effort to have the expulsion of Hamas included in the deal.From Monday’s news conferences and the information provided to the public, Turkey agreed that Hamas would not be allowed to plan terrorist operations from its territory, but did not agree to expel its political wing.The NGO said the distinctions between a political and military wing was artificial. It added that any Israeli agreement to normalize relations with Turkey without an expulsion of Hamas violated numerous Israeli public commitments on its red-lines for a deal, and would be a windfall for terror.It specifically noted that senior Hamas operative Saleh al-Arouri, who gave the order which led to the kidnapping and murder of three Jewish teenagers in June 2014, has been hosted in Turkey along with at least another 10 Hamas agents.Though there have been reports that al-Arouri may no longer be welcome in Turkey, full expulsion of Hamas, as has occurred in other countries, was clearly not part of the deal.